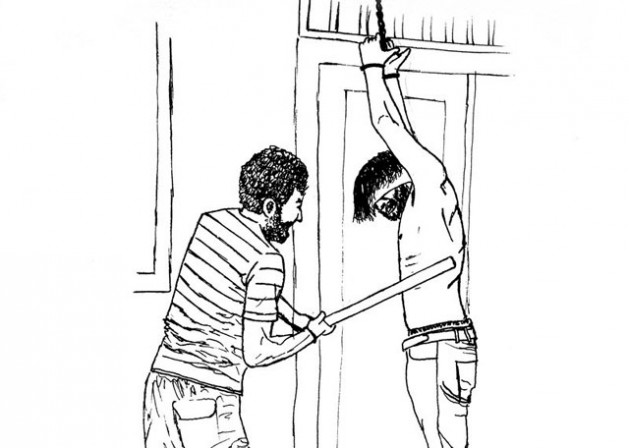 ROME, Feb 8 2017 (IPS) - At Saydnaya Military Prison, “the Syrian authorities have quietly and methodically organised the killing of thousands of people in their custody,” according to a new Amnesty International (AI) report.

The AI report says that “the murder, torture, enforced disappearance and extermination carried out at Saydnaya since 2011 have been perpetrated as part of an attack against the civilian population that has been widespread, as well as systematic, and carried out in furtherance of state policy.”

“We therefore conclude that the Syrian authorities’ violations at Saydnaya amount to crimes against humanity.” Amnesty International urgently called for an independent and impartial investigation into crimes committed at Saydnaya.

Every week, often twice per week, between 20 and 50 people are taken from their cells to be hanged, in the middle of the night, says AI, adding that as many as 13,000 people have been killed in Saydnaya since 2011, in utmost secrecy, between September 2011 and December 2015.

According to this global movement of more than 7 million people campaigning for a world where human rights are enjoyed by all, many other people at Saydnaya have been killed after being repeatedly tortured and systematically deprived of food, water, medicine and medical care.

“The bodies of those who are killed at Saydnaya are taken away by the truckload and buried in mass graves. It is inconceivable that these large-scale and systematic practices have not been authorized at the highest levels of the Syrian government.”

Before they are condemned to death, adds AI, victims face what the Syrian authorities call a “trial” at the Military Field Court. “In reality, this is a one or two-minute procedure in an office, in front of a military officer, where effectively the detainee’s name is logged into a death registry.”

On the day of the execution, which prison guards refer to as “the party”, they collect those who will be executed from their cells in the afternoon, says AI. “The authorities inform the detainees they will be transferred to one of the civilian prisons, which many believe have much better conditions. They are instead brought to a cell in the basement of the building, where they are severely beaten.’

Amnesty International reported that a former prison guard described how detainees are severely beaten throughout the night before being driven to an “execution room”: “The execution room at Saydnaya was expanded after June 2012, so that more people could be executed at once. Nooses line the wall. On entry to the room, the victims are blindfolded, and do not know that they are about to be killed.”

AI reported that they are then asked to place their fingerprints on statements documenting their death. Finally they are taken, still blindfolded, to concrete platforms, and hanged.

“They do not know how or when the execution will be carried out until the nooses are placed around their necks. Detainees held in the building in the floors above the execution room reported that they sometimes heard the sounds of these hangings.”

To this day, “detainees are still being transferred to Saydnaya, and ‘trials’ at the Military Field Court in al-Qaboun continue. There is therefore no reason to believe that executions have stopped,” according to Amnesty International.

In addition to abuses in the U.S. military base Bagram near Afghanistan capital Kabul, Amnesty International focused on “human rights violations for which the US-led Multinational Force is directly responsible and those which are being committed by Iraqi security.”

In its Mar. 6, 2006 report “Beyond Abu Ghraib: Detention and torture in Iraq”, AI said: “since the invasion in March 2003 tens of thousands of people have been detained by foreign forces without being charged.”

“Many cases of torture and ill-treatment of detainees held in facilities controlled by the Iraqi authorities have been reported,” AI added. “Amnesty International is calling on the Iraqi, US and UK authorities to take urgent, concrete steps to ensure that the fundamental human rights of all detainees in Iraq are respected.”

For his part, Human Rights Watch’ senior legal adviser Clive Baldwin on Jan. 27, 2017 wrote: “Last week, the United Kingdom Supreme Court delivered several key rulings about the application of human rights protections to British military detention overseas and accountability for alleged involvement of British forces in torture in Iraq, Afghanistan, and Libya. The rulings are mixed in terms of ensuring the rule of law and prevention of torture.”

A high number of cases of rights violations and torture have also been denounced by major international human rights organisations in other Middle East states, some of them considered close allies of Western countries.