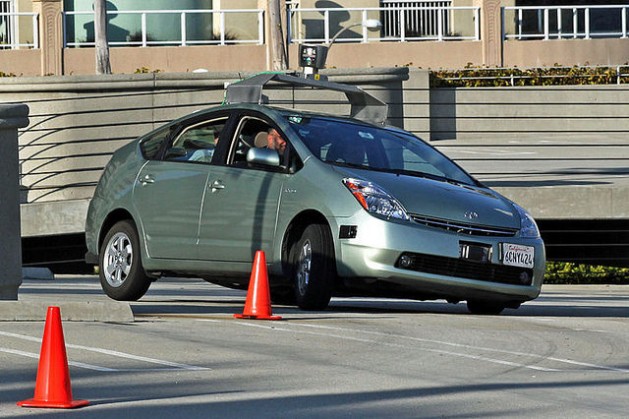 PENANG, Mar 15 2017 (IPS) - Last year Uber started testing driver-less cars, with humans inside to make corrections in case something goes wrong. If the tests go well, Uber will presumably replace their present army of drivers with fleets of the new cars.

Some personally owned cars can already do automatic parking.   Is it a matter of time before Uber, taxi and personal vehicles will all be smart enough to bring us from A to B without our having to do anything ourselves?

But in this application of “artificial intelligence”, in which machines can have human cognitive functions built into them, what will happen to jobs?   It is estimated that in the US alone, 4 to 5 million drivers of trucks and taxis could be rendered unemployed.

The driver-less vehicle is just one example of the technological revolution that is going to drastically transform the world of work and living.

The risk of automation to jobs in developing countries is estimated to range from 55 to 85 per cent, according to a study in 2016 by Oxford University’s Martin School and Citi. Major emerging economies will be at high risk, including China (77%) and India (69%), higher than the OECD developed countries’ average risk of 57%.
There is concern that the march of automation tied with digital technology will cause dislocation in many factories and offices, and eventually lead to mass unemployment.

Just a day before he left office, former US President Barrack Obama warned in a farewell interview that “jobs are going away because of automation and that’s going to accelerate,” pointing to “driverless Uber” and “displacement that’s going to take place in office buildings across the country.”

Also voicing concern about the social impact of automation, Microsoft founder Bill Gates recently proposed that governments should impose a tax on robots.  Companies using robots should have to pay taxes on the incomes attributed to the use of robotics.

That proposal has caused an uproar, with mainstream economists like Lawrence Summers, a former US treasury secretary, condemning it for putting brakes on technological advancement.  One critic suggested that the first company to pay taxes for causing automation should be Microsoft.

However, the tax on robots idea is one response to growing fears that the automation revolution will increase inequality as many lose their jobs while a few reap the benefits of increased productivity and profitability.

The new technologies will cause uncontrollable disruption and add to the social discontent and political upheaval in the West which had fuelled the anti-establishment votes for Brexit and Donald Trump.

Recent studies are showing that deepening use of automation will cause widespread disruption in many sectors and even whole economies.  Worse, it is the developing countries that are estimated to lose the most, and this will exacerbate the already great global inequalities.

The risk of automation to jobs in developing countries is estimated to range from 55 to 85 per cent, according to a study in 2016 by Oxford University’s Martin School and Citi.  Major emerging economies will be at high risk, including China (77%) and India (69%), higher than the OECD developed countries’ average risk of 57%.

The Oxford-Citi report, “The future is not what it used to be”, provides many reasons why the automation revolution will be particularly disruptive in the developing countries.

Seventy per cent of clients surveyed believe automation and 3D printing developments will encourage companies to move their manufacturing close to home.  China, ASEAN and Latin America have the most to lose from this relocation, while North America, Europe and Japan are the main winners.

Thirdly, “the impact of automation may be more disruptive for developing countries, due to lower levels of consumer demand and limited social safety nets” as compared to the developed countries, according to a summary of the Oxford Martin School report.

The report warns that developing countries may even have to rethink their overall development models as the old ones that were successful in generating growth in the past will not work anymore.

“In the light of these technological developments, industrialization is likely to yield substantially less manufacturing employment in the next generation of emerging economies than in the countries preceding them.  Hence it will be increasingly difficult for African and South American manufacturing firms to create jobs in the same numbers that Asian countries have done.  In other words, today’s low-income countries will not have the same possibility of achieving rapid growth by shifting workers from farms to higher-paying factory jobs.”

Instead of export-led manufacturing growth, developing countries will need to search for new growth models, said the report.  “Service-led growth constitutes one option, but many low-skill services are now becoming equally automatable.”

It cites a World Bank report showing developing countries are highly susceptible to their workforce being affected by increasing automation, even relative to advanced economies where labour costs are high.

Moreover, countries with lower levels of GDP per capita typically have a higher share of their workforce “at risk”.   “Thus there are reasons to be concerned about the future of income convergence, as low income countries are relatively vulnerable to automation,” concludes the report.

Another series of reports, by McKinsey Global Institute, found that 49% of present work activities can be automated with currently demonstrated technology, and this translates into US$15.8 trillion in wages and 1.1 billion jobs globally.

About 60% of all occupations could see 30% or more of their activities automated and 5% of jobs can be entirely automated.  But more reassuringly an author of the report James Manyika says the changes will take decades.   How automation affects jobs will not be decided simply by what is technically feasible.   Other factors include economics, labour markets, regulations and social attitudes.

Which jobs are most susceptible to be affected?  While most people think they would be in manufacturing, in fact many jobs in services will also be disrupted.   The McKinsey study lists accommodations and food services as the most vulnerable sector in the US, followed by manufacturing and retail business.

In accommodations and food, 73% of activities workers perform can be automated, including preparing, cooking or serving food; cleaning food-preparation areas, preparing beverages and collecting dirty dishes.

In manufacturing, 59% of all activities can be automated, especially physical activities or operating machinery in a predictable environment.  Activities range from packaging products to loading materials on production equipment to welding to maintaining equipment.

For retailing, 53% of activities are automatable.  They include stock management, packing objects, maintaining sales records, gathering customer and product information, and accounting.

A technology specialist writer and consultant, Shelly Palmer, has also listed elite white-collar jobs that are at risk from “robots” which she defines as technologies, such as machine learning algorithms running on purpose-built computer platforms, that have been trained to perform tasks that currently require humans to perform.

Those she assessed would be displaced include middle managers, salespersons, report writers, journalists and announcers, accountants, bookkeepers and doctors.

While some analysts are enthusiastic about the positive effects of the automation revolution, others are alarmed by its adverse effects.

Certainly, the technological trend will improve productivity per worker that remains, and increase the profitability of companies that survive.

While there are benefits at the micro level for those companies and individuals that thrive in the new environment, there are adverse effects at macro level, especially retrenchment for those whose jobs are no longer needed.

What can be done to slow down automation or at least to cope with its adverse effects?

The Bill Gates proposal to tax robots is one of the most radical.   The tax could slow down the technological changes and the funds generated by the tax could be used to mitigate the social effects.

Another radical idea which is generating a lot of debate is to provide “universal income” to everyone irrespective of whether they are working.  The high productivity will allow everybody to be paid a comfortable income, and thus there is no need to worry that automation will displace jobs.

Governments can also take the attitude of “join them if you can’t beat them.”  For example, China is seeing major opportunities in joining the technological revolution and has drawn up plans to invest in robotics and artificial intelligence.

Other more conventional proposals include upgrading the education of students and present employees to take on the new jobs required in managing or working with the automated production process, and training workers to be made redundant with the new skills needed to work in the new environment.

Overall, however, there is likely to be a net loss of employment, at least in the short term, and thus the potential for social discontent.

As for the developing countries in general, there will have to be much thinking of the implications of the new technologies for their immediate and long-term economic prospects, and a major rethinking of economic and development strategies is also called for.