Béatrice Fihn is Executive Director of the International Campaign to Abolish Nuclear Weapons (ICAN), Martin Butcher is Policy Advisor on Arms and Conflict at Oxfam International and Rasha Abdul Rahim is Advocate/Adviser on Arms Control and Human Rights at Amnesty International. 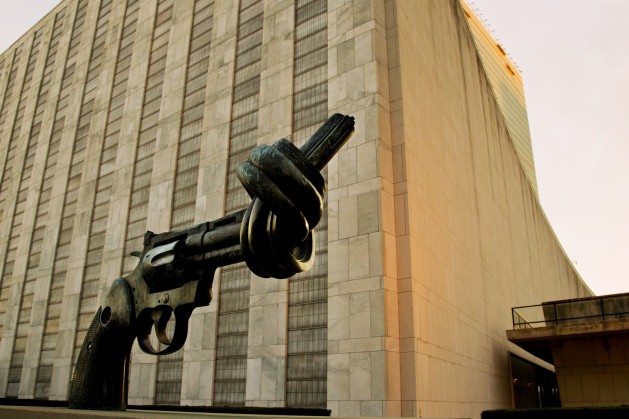 VIENNA/Oxford/LONDON, Mar 24 2017 (IPS) - Nuclear weapons are once again high on the international agenda, and experts note that the risk of a nuclear detonation is the highest since the Cold War.

As global tensions, uncertainty and risks of conflict rise amongst nuclear-armed states, nuclear weapons are treated as sabres to rattle, further heightening the risks of intentional or inadvertent use.

Nuclear weapons are the most destructive, inhumane and indiscriminate weapons ever created. Both in terms of the scale of the immediate devastation they cause and the threat of a uniquely persistent, pervasive and genetically damaging radioactive fallout, they would cause unacceptable harm to civilians.

But while the nuclear-armed states are implementing policies based on unpredictability, nationalism and weakening of international institutions, the majority of the world’s states are preparing to finally outlaw nuclear weapons.

Setsuko Thurlow, a survivor of Hiroshima, described the nuclear bombing as blinding the whole city with its flash, being flattened by a hurricane-like blast, and burned in the 4,000-degree Celsius heat. She said a bright summer morning turned to a dark twilight in seconds with smoke and dust rising from the mushroom cloud, and the dead and injured covering the ground, begging desperately for water, and receiving no medical care at all. The spreading firestorm and the foul stench of burnt flesh filled the air.

A single nuclear bomb detonated over a large city could kill millions of people and cause catastrophic and long-term damage to the environment. The use of tens or hundreds of nuclear bombs would be cataclysmic, severely disrupting the global climate and causing widespread famine.

Strikes of this kind would invariably violate international humanitarian law and international human rights law, yet, these weapons are still not explicitly and universally prohibited under international law. Nine states are known to possess them and many more continue to rely on them through military alliances.

The alarming evidence presented by physicians, physicists, climate scientists, human rights organisations, humanitarian agencies, and survivors of nuclear weapons attacks have been successful in changing the discourse, and opened space for greater engagement from civil society, international organisations, and states.

Because the humanitarian and environmental consequences of using nuclear weapons would be global and catastrophic, eliminating such dangers is the responsibility of all governments in accordance with their obligation to ensure respect for international humanitarian law.

The world is now facing a historic opportunity to prohibit nuclear weapons.

In October last year, a majority of the world’s states at the United Nations General Assembly agreed to start negotiations of a new legally binding treaty to prohibit nuclear weapons, in line with other treaties that prohibit chemical and biological weapons, landmines and cluster munitions.

As we’ve seen with these weapons, an international prohibition has created a strong norm against their use and speed up their elimination.

The negotiations will start at the United Nations in New York on 27-31 March, and continue on 15 June-7 July, with the aim of concluding a legally binding instrument to prohibit nuclear weapons.

Amnesty International, Oxfam and the International Campaign to Abolish Nuclear Weapons (ICAN) believe that it is time to negotiate a treaty that would prohibit the use, possession, production and transfer of nuclear weapons, given their indiscriminate nature. No state, including permanent members of the UN Security Council, should possess nuclear weapons.

This is the moment to stand up for international law, multilateralism and international institutions. All governments should seize this opportunity and participate actively in the negotiations of a treaty prohibiting nuclear weapons in 2017.