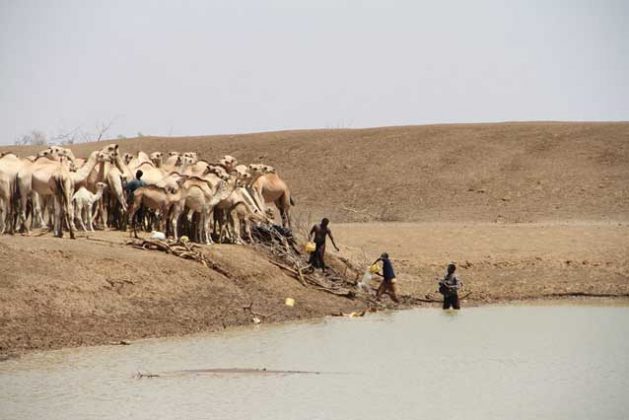 The most affected areas, which received less than half of their normal seasonal rainfall, are central and southern Somalia, South-Eastern Ethiopia, northern and eastern Kenya, northern Tanzania and north-eastern and South-Western Uganda, according to a new alert by the UN Food and Agriculture Organization (FAO).

“We can prevent people dying from famine but if we do not scale up our efforts to save, protect and invest in rural livelihoods, tens of millions will remain severely food insecure.” – FAO chief

“This is the third season in a row that families have had to endure failed rains – they are simply running out of ways to cope,” said FAO’s Director of Emergencies Dominique Burgeon. “Support is needed now before the situation rapidly deteriorates further.”

The number of people in need of humanitarian assistance in the five aforementioned countries, currently estimated at about 16 million, has increased by about 30 per cent since late 2016. In Somalia, almost half of the total population is food insecure, the UN specialised body reported.

Timely humanitarian assistance has averted famine so far but must be sustained. Conditions across the region are expected to further deteriorate in the coming months with the onset of the dry season and an anticipated early start of the lean season, it added.

The food security situation for pastoralists is of particular concern, in Ethiopia, Kenya and Somalia, where animal mortality rates are high and milk production from the surviving animals has declined sharply with negative consequences on food security and nutrition, FAO warned.

“When we know how critical milk is for the healthy development of children aged under five, and the irreversible damage its lack can create, it is evident that supporting pastoralists going through this drought is essential,” said Burgeon.

On this, FAO provides the following detailed information:

In several cropping areas across the region, poor rains have caused sharp reductions in planting, and wilting of crops currently being harvested. Despite some late rainfall in May, damage to crops is irreversible.

In addition, fall armyworm, which has caused extensive damage to maize crops in southern Africa, has spread to the east and has worsened the situation. In Kenya, the pest has so far affected about 200 000 hectares of crops, and in Uganda more than half the country’s 111 districts are affected.

In Somalia there are unfavourable prospects for this year’s main gu crops, after the gu rains were late with poor rainfall and erratic distribution over most areas of the country.

Meanwhile, despite international efforts to address food insecurity, around 108 million people living in 48 food-crisis countries were at high risk of or already facing severe acute food insecurity in 2016, a dramatic increase compared with 80 million in 2015, according to a new global report on food crises released on 31 March in Brussels. 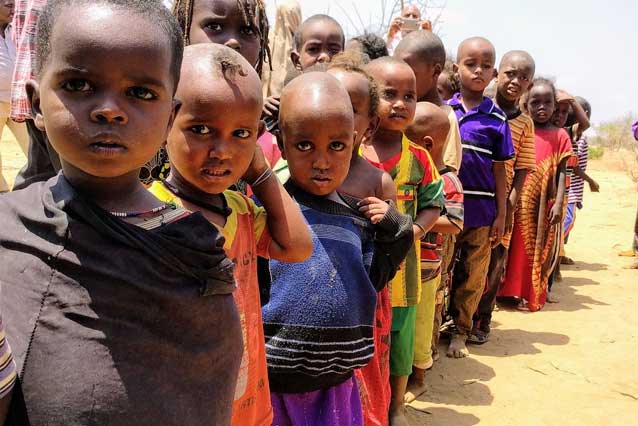 Children lining up for their one meal per day at a school in Bandarero, Northern Kenya. Credit: OCHA/ Daniel Pfister

The report, whose compilation required integrating several measurement methodologies, represents a new and politically innovative collaboration between the European Union (EU) and USAID/FEWSNET, regional food security institutions together with UN agencies including the FAO, the World Food Programme (WFP) and the UN Children’s Fund (UNICEF).

“The dramatic increase reflects the trouble people have in producing and accessing food due to conflict, record-high food prices in local markets in affected countries and extreme weather conditions such drought and erratic rainfall caused by El Niño. “

Civil conflict is the driving factor in nine of the 10 worst humanitarian crises, underscoring the strong linkage between peace and food security, says the Global Report on Food Crises 2017.

By joining forces to deliver neutral analytical insights drawn from multiple institutions, the report – to be issued annually – enables better-informed planning decisions to respond to food crises in a more timely, global and coordinated way.

“This report highlights the critical need for prompt and targeted action to effectively respond to the food crises and to address their root causes. The EU has taken leadership in this response. In 2016, we allocated € 550 million already, followed by another € 165 million that we have just mobilized to assist the people affected by famine and drought in the Horn of Africa,” said Neven Mimica, EU Commissioner for International Cooperation and Development.

“The report is the outcome of a joint effort and a concrete follow-up to the commitments the EU made at the World Humanitarian Summit in Istanbul, which identified the urgent need for transparent, independent but consensus-based analysis of crises,” added Christos Stylianides, Commissioner for Humanitarian Aid and Crisis Management.

This year, the demand for humanitarian and resilience building assistance will further escalate as four countries are at risk of famine: South Sudan, Somalia, Yemen and northeast Nigeria, the report warns.

Other countries that require massive levels of assistance because of widespread food insecurity are Iraq, Syria (including refugees in neighbouring countries) Malawi and Zimbabwe. In the absence of immediate and substantive action not only to save people’s lives, but also to pull them back from the brink of famine, the food security situation in these countries will continue to worsen in coming months, according to the report.

“The cost in human and resource terms only increases if we let situations deteriorate,” said FAO Director-General José Graziano da Silva. “We can prevent people dying from famine but if we do not scale up our efforts to save, protect and invest in rural livelihoods, tens of millions will remain severely food insecure.”

“The numbers tell a deeply worrying story with more than 100 million people severely food-insecure, a level of suffering which is driven by conflict and climate change. Hunger exacerbates crisis, creating ever -greater instability and insecurity. What is a food security challenge today becomes tomorrow’s security challenge,” said Ertharin Cousin, Executive Director of the World Food Programme.

“It is a race against time – the world must act now to save the lives and livelihoods of the millions at the brink of starvation.”

The 108 million people reported to be facing severe food insecurity in 2016 represent those suffering from higher-than-usual acute malnutrition and a broad lack of minimally adequate food even with external assistance.

This includes households that can cope with their minimum food needs only by depleting seeds, livestock and agricultural assets needed to produce food in the future, the report adds.

“Without robust and sustained action, people struggling with severe food insecurity risk slipping into an even worse situation and eventual starvation.”