ROME, Jul 28 2017 (IPS) - They borrow huge amounts of money. They sell all their modest properties. They suffer brutalities on the hands of their own countries “security” forces to prevent them from fleeing wars, droughts, floods, lack of food, extreme poverty.

Thousands of them fall prey to human traffickers who take they money to load them on fragile boats in voyages toward death. And hundreds of survivors are bought and sold as slaves. See: African Migrants Bought and Sold Openly in ‘Slave Markets’ in Libya.

Should all this not be enough, the UN International Organization for Migration (IOM) has just reported that voyages through the so-called Eastern Mediterranean route and into the European Union now cost 5,000 dollars or more.

“With increased border controls, it has become harder to reach Europe,” noted Livia Styp-Rekowska, IOM’s Border Management Specialist in Vienna. “One constant, however, is the increase in sums demanded.”

Styp-Rekowska noted new data released on 25 July that shows “the cost of getting into Europe has increased significantly when compared to 2016, the routes have changed, and different countries of destination are being prioritized.”

People arriving from Afghanistan, Syria and Pakistan are charged the most, according to IOM. 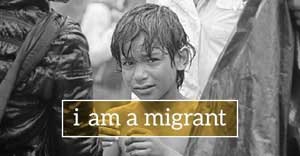 The most popular destination up to June 2016 was overwhelmingly Germany, but migrants now seek to get to France, Sweden, Italy, Norway, Austria and Denmark as well, with Greece used as a popular transit country.

IOM has also reported that 112,018 migrants and refugees entered Europe by sea in 2017 through 23 July, with almost 85 per cent arriving in Italy and the remainder divided between Greece, Cyprus and Spain. This compares with 250,586 arrivals across the region through 23 July 2016. See: Death Toll Rises in the Mediterranean Sea as EU Turns Its Back

Children Flee by Themselves

Meantime, Children Now More Than Half of the 65 Million Displaced and bear the blunt of inhumane abuses. In fact, the UN Children’s Fund (UNICEF) on the same –25 July—reported that facing violence and trauma in Libya and other countries, thousands of children decided to flee by themselves, seeking to get away but not necessarily aiming for Europe. 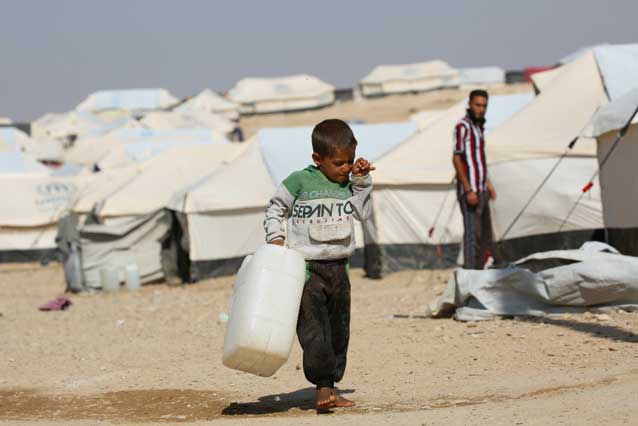 A five year-old boy carries an empty water jerry in Al-hol camp in north-eastern Syria, hosting over 4,600 Iraqi refugees. Like most children there, he bears the brunt of carrying water for his family. Credit: UNICEF/Souliman

A new study of push-pull factors on child marriage showed that 75 per cent of children on the move decided to leave unaccompanied and that initially, they had no intention to come to Europe, UNICEF spokesperson Sarah Crowe said.

“What was striking in the new findings was that there were far more push factors, pushing children away from home – conflicts or violence at home – than there were pull factors [that lure them to Europe], and this went against the current narrative,” Crowe said.

She noted that of the children who arrived in Libya, 63 per cent of young people left the country because of the generalised violence and trauma they suffered or witnessed, making them more willing to take terrifying sea journeys.

“As one young Gambian boy said, ‘if you have a lion behind your back and a sea in front of you, you take the sea,’” she added.

“Among girls interviewed, one in five left because of forced child marriage at home.”

UNICEF stressed that the study is important for policymakers to understand why the children are making the voyage and how best to help them once they arrive in Europe… If they arrive! See: A Grisly Tale of Children Falling Easy Prey to Ruthless Smugglers