Cheick Ba is the Norwegian Refugee Council Country Director in Nigeria, who has worked in the humanitarian sector for more than 20 years, including in Angola, Cote d’Ivoire, Guinea and the Democratic Republic of Congo. 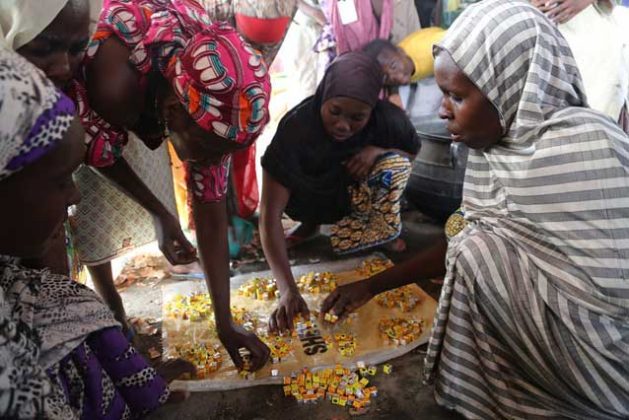 Maiduguri City, Nigeria, Jul 25 2017 (IPS) - In the dusty arid town of Dikwa, tens of thousands of Nigerians queue for hours in sweltering 40-degree heat for water. Fatuma is one of 100,000 people displaced in the Borno State town, the epicentre of Nigeria’s conflict. She sifts through remnants of food aid seeds, drying them out to prepare them to eat. Food is a scarcity here. Fatuma used to live on three meals a day. Today she is happy if aid agencies can provide her with a single meal.

Dikwa’s food crisis is mirrored throughout the conflict-stricken northeast, where the armed group Boko Haram has been brutally fighting to enforce strict Islamic Sharia law since 2009.

The Nigerian government launched a military operation in 2015 to flush the jihadist group out. An estimated 20,000 people have been killed due to the violence. Close to 2 million people have fled their homes, including 200,000 who sought safety in neighbouring Cameroon, Chad and Niger.

The violence was the first thing Nigerians feared for their lives. Now they fear famine.

Northeast Nigeria is inching closer than ever to mass starvation. The food crisis is about to get alarmingly worse, with food security experts predicting its deterioration between now and the end of August.

Experts forecast a rise in the number of people facing crisis, emergency and famine conditions from 4.7 million to 5.2 million in northeast Nigeria. This includes 50,000 people likely to be affected by ‘famine-like’ conditions, according to the latest United Nations Global Early Warning report.

Declaring famine has serious implications for countries to step up and take action. It rings international alarm bells. But lack of access to some communities caught up in Nigeria’s conflict means the exact number of people dying of hunger is impossible to confirm. Regardless, the threat of famine draws nearer.

Armed conflict and violence are driving this food crisis. Insecurity is preventing people from farming in many areas, and restricting access to local markets. This is depleting grain stocks and pushing food prices beyond people’s reach. It’s having devastating consequences for affected families, including 450,000 acutely malnourished children.

The May to August lean season is well underway in Nigeria. This is a period when food production is traditionally low and families rely on what they have stockpiled from more plentiful times. With many farmers unable to cultivate their land for up to three years already, families have little reserves to draw from.

Inflation caused by currency depreciation is compounding the situation further. Conflict areas are experiencing prices about 150 per cent higher than in 2015, according to the United Nations.

My organization, the Norwegian Refugee Council, was forced to reduce the food basket we provide to families this month, to make up for the increased price of rice beans and millet. It’s a heart-breaking decision to make, but the alternative is to feed fewer people.

Despite the worsening food crisis, donor countries have only contributed 28 per cent of the money needed to provide the most basic humanitarian assistance this year. More visible crises like the war in Syria and Iraq garner so much international attention, there is less space for countries like Nigeria to get the same attention. As a result, donor dollars go elsewhere.

But while providing people with food saves lives, it’s only a short term solution. The crisis will only end when the conflict has been resolved, and communities can safely return to their land to rebuild their lives.