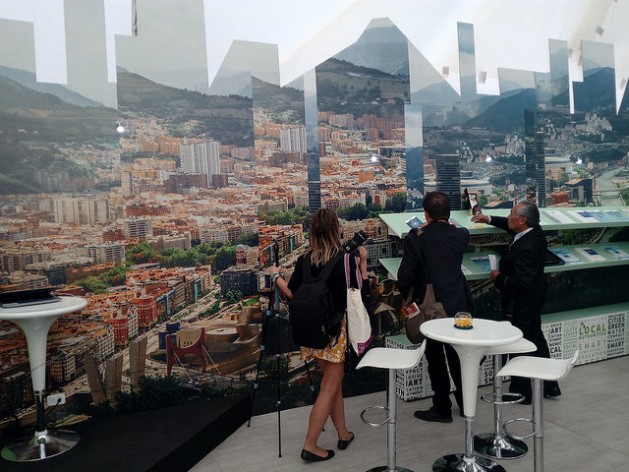 A photocomposition of European cities in a Habitat III exposition in Quito. Credit: Emilio Godoy/IPS

UNITED NATIONS, Aug 4 2017 (IPS) - At the beginning of August, the High Level Independent Panel to Assess and Enhance Effectiveness of UN-Habitat came out with its report. Before commenting on the Panel Report I want to put up front that I know that a lot of the staff in UN Habitat do excellent work and its same they weren’t given a proper role in Habitat III.

It should be remembered that UN Secretary General Antonio Guterres appointed the high-level panel in April this year. The Panel had a very short time to produce its report. I would argue far far too short a time.  To enable a Panel to get on top of options and proposals and hear viewpoints on initial drafts Panels should not be expected to report in less than two years. So, I find myself reading a report that I already have concerns about in the context of the ability of those on the Panel to really get beyond a literature search and a few outside papers and very little outside reflection or input.

Universal body: Let’s turn to the recommendations. The first one I would highlight is making UN Habitat a universal body. No! No! No!

So why not? UNEP was made a universal body out of Rio+20. It has had only 2 meetings as a universal body and there are big questions whether the new body is better than the old UNEP Governing Council. What I mean is it is too early to say if going to the additional bureaucracy and finance needed for a universal body makes the body more effective or less. It’s not as if countries are fighting over trying to become a member of the governing body of UN Habitat. Ensuring that any governing body of UN Habitat schedule overlaps with the UN Environment Assembly is a good idea and one that has been advocated in the 1990s for the functioning commissions of EcoSoc. I have advocated that before every High Level Political Forum (HLPF) there should be a two-day local SDG conference. This should be organized by the stakeholders with UN Habitat and other UN bodies in support NOT leading. The idea of having an Assembly or for that matter a Forum around the UNGA is a none starter. Member states in New York are preparing prior to the Heads of State session for their Heads of State, Ministers and events the idea that another set of activities would come into a space that is already highly stressed shows a lack of understanding of intergovernmental processes.

Stakeholders and Habitat:  Habitat II in 1996 in the original text had given places on the Commission on Human Settlement to industry, women, NGOs and local government. Member States took that out either in New York or Nairobi I can’t remember. That was a good suggestion.

Committee of Stakeholders: This made me laugh. The people on the Panel clearly don’t understand the term stakeholder. They interchange stakeholders with civil society which are completely different terms and refer to different groups so for example academics, Indigenous Peoples, the local government and the private sector are not members of civil society. They then go on to suggest that the Committee of Stakeholders will include ten civil society representatives, five academics and five from the private sector. It’s embarrassing. I could go into this at length but just in terms of the SDG process through the HLPF private sector are 1 of 10 or more stakeholder groups in this process they become 1 in 4. I didn’t see much evidence that the private sector was at the door clamoring to get involved with the Habitat III process. As far as the 5 places for academics REALLY!!!!! Are they more important to pick out than a few other stakeholders that are central to delivering the SDGs such as women, youth, the NGOs who are actually active on human settlement issues?

Committee on Local Government:  I understand why this is a good idea for local and sub national government. I do believe they need a different relationship with UN Habitat than other stakeholders and this should be looked at. I’m not sure this doesn’t ghettoize them.

Private Sector: Is the most central ask of the Panel for ‘UN Habitat explore ways to encourage private sector actors to look at the unintended negative impacts of their investments and to find ways to mitigate them?’ . The Panel goes on to say ‘that UN-Habitat develop a strategy for cooperation with multilateral banks, financial institutions, and private sources of finance in order to increase the available resources for inclusive and sustainable urbanization.’ What it should focus on is supporting the development of principles for PPPs or whether PPPs are the right approach for infrastructure. As it is in many cases sub national governments who are doing PPPs – UN Habitat could play a role in the UN family to collect best practice to support the UN developing core PPP principles and offer capacity building with the sub-national and local government bodies to help sub national governments to address where PPPs or Public-Public-Public Partnerships are the better way forward.

UN Urban: This is a good idea PROVIDED UN Habitat does not chair it. I say that because both for Habitat II and Habitat III the Executive Directors kept out the rest of the UN Family as much as they could. Either intentionally – because they were worried about competition or incompetence where they didn’t engage the family members early enough to enable them to bring their expertise to the table. UN Water has elections for the head of it – it did at one time rotate the chair. Both of these ideas would be work considering. UN Habitat should act as the Vice Chair. The secretariat for UN Urban should be seconded people from different agencies and programmes.  As with UN Water stakeholders should be enabled to join as non-voting members.

Funding: It has been estimated that we need $5-7 trillion a year to implement the SDGs. If NUA had actually been about the local implementation of the SDGS as opposed to a forgotten agreement languishing on people’s hard drives then you could work out the funding needed at the local level for the over 60% of the targets that need a local implementation. A Panel that had two years to do its work could have commissioned such a paper. This would have been the basis for then a conversation with Member States and other funders about what role UN Habitat might play.

The reason that UN Habitat is not funded adequately is that Member States DO NOT have confidence in the leadership of the body. Setting up new funds without new leadership and the beginning of a proven record is I think a waste of time.

Finally – the bits of the NUA which will survive will be those that support the implementation of the SDGs, the Paris Climate Agreement and the AAAA.

What this report doesn’t do is look at other options (a) merging with UNEP (b) going back into UNDP. It also doesn’t ask Member States and stakeholders what services they need from UN Habitat at the country level. This could have been undertaken over a two-year period but not in a less than five month period. How it fits into the Secretary Generals Re-positioning the UN Development System to Deliver on the 2030 Agenda is unclear. It probably means it will be seen as a feeding into the second report due out in December.

For UN Habitat to be a success it needs to focus on the SDG agenda it needs to make friends again with the UN family as a whole and not try and barriers around the localization of the SDGs and say MINE. So much of the UN family is working at the country level on similar parts of the agenda and should be doing this in cooperation with UN Habitat. It will be up to the next Executive Director of UN Habitat to do much of this. If they don’t, then they may be the last Executive Director of UN Habitat.