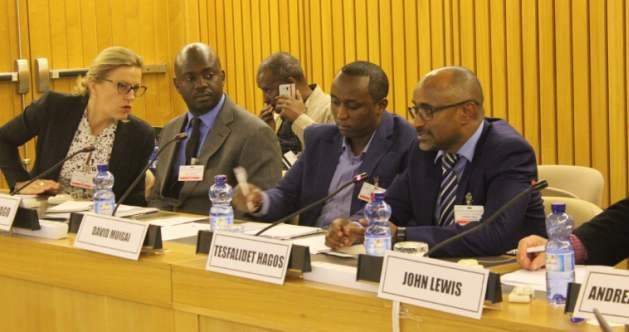 ADDIS ABABA, Oct 20 2017 (IPS) - Index insurance is being promoted as a solution to protect climate affected smallholder farmers in Africa. This type of micro insurance is slowly gaining ground as a way of compensating farmers for lost crops and livestock due to climate change.

A number of African governments have either introduced or are piloting index insurance while some are still waiting and watching to see if it will have any tangible impact. Various experts attending the Global Green Growth Week conference in Addis Ababa, Ethiopia discussed and shared experiences with index insurance as an innovation in agriculture for climate and food security in Africa.

“We have managed to serve over 1.3 million farmers. So we have proved that index insurance is scalable. But the key challenge is financial education for the farmers and the regulatory environment regarding use of technologies like mobile phones to provide the services.”
Dr. Bruce Campbell, Director of the CGIAR Research Program On Climate Change, Agriculture and Food Security explained how in the older days of insurance you had to go out and find out if anything is damaged and there would be a payout after everything is damaged “Index insurance is a really neat product because it is based on index. So if the rain drops below a certain amount, the insurance company knows the crop has failed and they will pay the money immediately.”

Campbell said with index insurance, the farmer gets the money immediately and does not have to sell his/her assets in order to survive. It also reduces the transaction costs.

According to Campbell, index insurance, also known as parametric insurance, has been around for close to 17 years and is slowly taking root in Kenya, Zimbabwe and other African countries. With this experience, countries can now share experience about it works and what needs to be improved.

A common example, Campbell told IPS, is of a remote rural farmer who buys seed, uses his mobile phone to take an image of the barcode on the seed pack and sends it to the insurance company to buy insurance. “When the rain fails, they can get the payment back as insurance,” Campbell explained.

It is estimated that sixty farmers in Kenya are registered under the index insurance schemes being rolled out with help of insurance firms partnering with mobile phone operators.

David Muigai, an Actuarial Officer with Sygenta Foundation For Sustainable Agriculture said their experience in East Africa has shown that index insurance offers affordable insurance and has helped farmers to benefit from agriculture.

“We have managed to serve over 1.3 million farmers. So we have proved that index insurance is scalable. But the key challenge is financial education for the farmers and the regulatory environment regarding use of technologies like mobile phones to provide the services.”

Zimbabwe’s mobile network, Econet Wireless, is providing services offering climate-based insurance to farmers via SMS and voicebased messages. “They also ensure that you shouldn’t just sell insurance. It should be bundled with other things like agricultural advisories and funeral policies,” explained Dr. Campbell, also resident in Zimbabwe.

Uganda is among the African countries that have just introduced an index insurance scheme run on a public private partnership basis between insurance firms, the insurance regulatory authority and the Central Bank of Uganda, which holds the money.

The Government of Uganda allocated a USD2 million budget this financial year to provide a 50% premium subsidy to smallholder farmers. Under the same scheme, large-scale farmers are given 30% premium subsidy.

Lukwago said the elite are being attracted to livestock and crop farming because they know they are covered under the index insurance scheme. He gave the example of a retired civil servant who invested his employment gratuity in growing passion fruit. “There was drought and the farmer lost the entire crop. He was found dead the following day. We believe he would still be alive if he had insurance,” Lukwago narrated.

But the reviews on index insurance remain mixed.

According to Lukwago, there is need for a lot of farmer sensitization. “You must convince the farmers that it works. They must see the benefits. If there is a season hit by drought and the insurance companies are not paying, expect a decline the next season”.

Based on Uganda’s experience, Lukwago added that index insurance requires a lot of meteorological data. “You need to put up weather stations to measure climatic changes, you must domesticate the products. Some of the concepts from Western Can Index Insurance Make African Farmers Climate-resilient? world may not work in our local situations.”

Muigai said challenges remain in persuading insurance regulators and Central Banks in East Africa to accept text messages as evidence of insurance purchases. Kennedy Tesfam, from the International Maize and Wheat Improvement Centre in Addis Ababa is of the view that while index insurance has been in Africa for quite a while it is not taking off.

Tesfalidet Hagos, Managing Director at Ethiopia’s Luna Exports Slaughterhouse Plc said his organization has tried index insurance in the vegetable sector and hopes that it can work in livestock production.

“The most important thing we are trying to achieve is to increase the income of the farmers. If we can ensure better productivity of the farmers, they will have better income and therefore take insurance. We want to begin from the root cause. And I believe the root cause of everything in Africa is poverty” Hagos said.