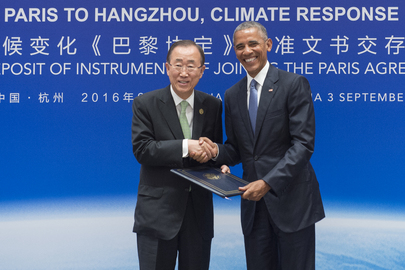 UNITED NATIONS, Oct 2 2017 (IPS) - Having faced a year of record temperatures and devastating hurricanes, the United States stands more to lose if it doesn’t take steps to reduce the risk and impact of climate change, according to a new report.

Launched by the Universal Ecological Fund, it details the costs of the U.S.’ climate inaction to the national economy and public health and urges for policies to move the country towards a sustainable future.

“It’s not about ideology, it’s about good business sense,” the former president of the American Association for the Advancement of Science (AAAS) and the report’s co-author James McCarthy told IPS.

“Many people say that they will not have the discussion because they are not convinced of the science—well then, let’s just look at the economics, let’s look at what it is costing to not have that discussion,” he continued.

A Wake of Destruction

The U.S. is still reeling from an unprecedented month of three hurricanes and 76 wildfires, devastating landscapes from Puerto Rico to Washington.

Hurricane Maria alone left Puerto Rican residents without food, water, or electricity. Approximately 44 percent of the population lacks clean drinking water and just 11 out of 69 hospitals have fuel or power, pushing the island to the brink of a humanitarian crisis.

“This year was nothing like we’ve seen,” said McCarthy.

Though aid delivery is underway, the economic losses from not only Hurricane Maria, but also Hurricanes Harvey and Irma along with the wildfires that swept through the Western coast, are estimated to be the costliest weather events in U.S. history.

The report estimates a price-tag of nearly 300 billion dollars in damage, representing 70 percent of the costs of all 92 weather events in the last decade.

Since hurricane season is yet to end, more expensive and damaging storms may still be in the forecast.

According to the National Oceanic and Atmospheric Administration National Centers for Environmental Information, the number of extreme weather events that incurred at least one billion dollars in economic losses and damages have increased in the last decade by almost two and a half times.

Such losses will only rise as human-induced climate change continues, contributing to dry conditions favorable for more wildfires and warm oceans which lead to more intense storms and higher sea levels.

McCarthy, who is also an Oceanography Professor at Harvard University, told IPS that investments beyond creating hurricane-proof infrastructure are needed to counter such damage.

“Infrastructure is important, but everything we can do to reduce the intensity of these events, by slowing the rate of global warming, will make future infrastructure more likely to be effective,” he said.

Among the major drivers of climate change is the burning of fossil fuels which the U.S. continues to rely on to produce energy.

Coal, oil and natural gas—all of which are fossil fuels— currently account for over 80 percent of the primary energy generated and used in the North American nation. When such fossil fuels are burned, large amounts of carbon dioxide (CO2) are released to the atmosphere, contributing to rapid changes in the climate.

If fossil fuels continue to be used, both economic losses and health costs are estimated to reach at least 360 billion dollars annually, or 55 percent of U.S.’ growth, over the next decade.

And the government won’t be footing the expensive bill, the report notes.

“Time after time, we are going to see the public bearing the costs…it becomes a personal burden for them,” McCarthy told IPS.

He highlighted the importance of the U.S. taking steps to transition from fossil fuels to renewable energy.

“To move people, literally and figuratively, into the future to be more healthy and more sustainable and a less expensive way of doing business just makes sense,” McCarthy said.

Not only will it provide sustainable clean electricity and reduce the rate of global warming, renewable energy also can add to the economy by producing jobs.

In order to successfully transition to a low-carbon economy, investments are essential, some of which can potentially come from taxing carbon emissions, the report states. A carbon tax aims to reduce emissions and promote a more efficient use of energy, including the transition to electric cars.

According to the Intergovernmental Panel on Climate Change (IPCC), a tax on carbon emissions can potentially produce revenues of up to 200 billion dollars in the U.S. within the next decade.

The carbon tax has been a controversial policy, with some expressing concern that companies will simply shift the cost to the consumer by way of increasing the prices of gasoline and electricity.

However, McCarthy noted that the public already currently bears the burden in terms of damages from extreme weather events and unhealthy air expenses.

Despite the evidence for climate change and the role of fossil fuels in driving such change, U.S. President Donald Trump has begun to unravel many essential environmental protections.

Not only did his administration announce the U.S. withdrawal from the landmark Paris Agreement, but it is currently working to dismantle the Clean Power Plan (CPP) which aims to reduce carbon pollution from power plants across the country.

The move is tied to President Trump’s repeated calls to renew investments in the coal industry, claiming that it will bring back jobs.

McCarthy said that these actions are not “borne out by the facts.”

“The notion that you will be able to return the U.S. to a coal economy—there is no evidence for that. And secondly, if you are going to create jobs, the sensible way to create them is in a forward-looking area such as renewable energy rather than the highly risky and repeated exposure of coal,” he told IPS.

In spite of a national strategy that may exacerbate climate change, McCarthy said that cities and states are taking the lead and will continue to move in the right direction regardless of bipartisan politics.

Iowa is the leading U.S. state in wind power with over 35 percent of its electricity generated from wind energy.

“When you look at a state like Iowa and see [their] electricity is coming from wind energy, it doesn’t say anything about the politics of Iowa—it says something about people being sensible about how they spend their money and what they invest in to get a particular product,” McCarthy said.

The U.S.’ reluctance to reduce greenhouse gas emissions not only impacts Americans, but also people around the world. Since the process of withdrawing from the Paris Agreement will take time, McCarthy expressed hope that the U.S. will change its course.

“We hope over that period of time that [President Trump] will see that this partnership has enormous value and not only what the U.S. is doing that affects the rest of the world but vice versa,” he said.

“We should find reason to join efforts with the community of nations that have recognized, much like what we try to say in this report, that if we don’t do something, these are going to be very expensive and, in some cases, life-threatening consequences of this sort of neglect,” McCarthy concluded.

Governments will be convening in Bonn, Germany for the UN’s Annual Climate Change Conference (COP23) in November to advance the implementation of the Paris Agreement. The focus will be on how to implement issues including emissions reductions, provision of finance, and technology.