This article forms part of the IPS coverage for World Food Day, celebrated on October 16. 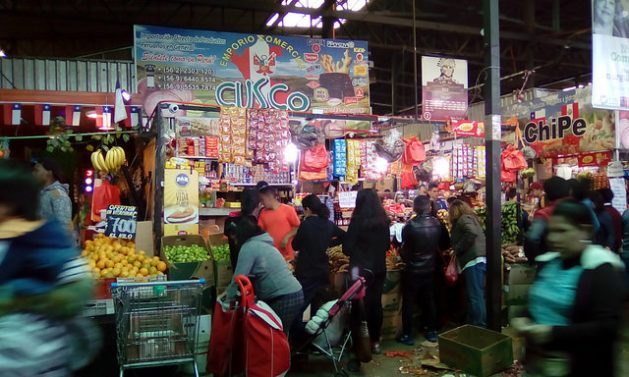 In Vega Central, the biggest fruit and vegetable market in Santiago, the stands of Peruvian migrants, 300,000 of whom live in Chile, offer typical produce and meals from that country. Credit: Orlando Milesi/IPS

SANTIAGO, Oct 13 2017 (IPS) - The aim is for migration to become just one option among others for the rural population of Latin America, says Brazilian expert Luiz Carlos Beduschi, referring to an issue that causes concern in the region due to its impact on food security.

The theme this year of World Food Day, celebrated Oct. 16, is “Change the future of migration. Invest in food security and rural development”, promoted by the United Nations Food and Agriculture Organisation (FAO).

“If living conditions improve in rural areas, people can use more autonomous strategies that can turn the decision of whether or not to migrate into just one more option among other alternatives,” Beduschi, policy officer in FAO’s regional office in Santiago, Chile, told IPS.

The Brazilian academic added that “the tendency to migrate increases or declines” depending on the specific characteristics and circumstances of the potential migrants.

He mentioned, for example, individual circumstances, such as “the search for independence among the young,” and family circumstances, because “among families with members in other countries, the tendency to migrate is stronger.”

Other reasons arise from where people live. With regard to this point, Beduschi explained that “in areas with greater economic opportunities and lower crime rates, better public services, etc, the tendency to migrate is weaker.

“In more remote areas with poorer quality land, where people don’t have savings or cash allowing them to migrate, social protection policies are even more necessary,” he said.

Some 30 million people from Latin America and the Caribbean live outside their home countries, equivalent to four percent of the total population of the region, according to Economic Commission for Latin America and the Caribbean (ECLAC) statistics, which are based on the latest national census information from the different countries. Of that total, some 20 million live in the United States and 11 million of them are undocumented.

Central America and southern Mexico account for the largest number of migrants from the region – 9.7 percent of the total population of this subregion known as “Mesoamerica” – and Mexico represents 40 percent of the region’s total migration, with approximately 12 million Mexicans living abroad, mainly in the United States.

The International Migration Report 2016, prepared by the Population Division of the Department of Economic and Social Affairs of the United Nations Secretariat, reported that migrants from Latin America are getting younger: between 2010 and 2015, the median age of immigrants from this region declined from 40 to 36 years.

Another phenomenon that ECLAC emphasises is that so far this century, inter-regional migration in Latin America has grown at an annual average of 3.5 percent, with more than eight million Latin American immigrants living in other nations in the region, 63 percent in countries that border their own.

For Víctor Hugo Lagos, a lawyer with the Jesuit Service for Migrants that operates in three Chilean cities, poverty is the main factor driving immigration today.

“Poverty is a factor that makes people decide to leave their home countries and seek opportunities elsewhere. And poverty has different causes, such as a lack of access to education or jobs,” he told IPS.

Jorge Martínez with the Latin American and Caribbean Demographic Centre (CELADE) said that in this region, rural migration to urban areas has declined.

“That was an issue in previous decades, which accompanied broad social and economic changes – migration driven by a lack of opportunities, by modernisation in agriculture, and the simultaneous draw of urban areas,” he told IPS at CELADE headquarters in Santiago.

He added that most of the migrants from Latin America come from urban areas, with a few exceptions, such as Mexico, where migration is still leading to the depopulation of rural areas.

“One factor that can have a potentially heavy influence is natural disasters/climate change, which requires a new assessment of the consequences of mobility, affecting the most disadvantaged and the least resilient,” he warned.

In 2015, more than 19 million people worldwide were displaced within their countries as a result of natural disasters, according to FAO.

Between 2008 and 2015, an average of 26.4 million people a year were displaced by natural catastrophes.

Lagos lamented that “at the level of international law (natural disasters) have not been recognised as grounds for granting refugee status in another country,” because “practice shows that today the environment is one of the main factors leading people to leave their countries.

“One classic example is Haiti, which is not only a country steeped in poverty and whose leaders have shown a high level of corruption, but which has also been plagued by different natural disasters,” he said.

Beduschi, meanwhile, stressed that the projects, programmes and policies supported by FAO seek to strengthen the decision-making autonomy of rural families, including the decision of whether or not to migrate.

The idea is “to change the future of migration, investing in food security and agriculture.

“What we are trying to do in FAO, with a broad, diverse set of partners, is to eradicate rural hunger and poverty, improve nutrition, make better use of natural resources, and strengthen people’s livelihoods,” he said.

“International cooperation is not aimed at reducing the number of migrants, but at helping to make migration a safe, orderly and regular process,” he added. “The idea is also for people and families to decide to migrate, not as the only option for their development, but as one option in a broaders range of opportunities.”
Beduschi said “conflicts over ownership and use of natural resources are also related to migration flows,” as are aspects such as “changes in climate conditions and the exhaustion of natural resources.”

He said that “expanding access to assets and services is part of the response to build up resilience in rural areas, as is promoting more environment-friendly production methods.”

According to FAO, investing in sustainable food production and rural development systems helps to address the main global challenges in feeding the growing global population, protecting the climate, and tackling some of the fundamental causes of migration and displacement.

It adds that the 17 Sustainable Development Goals (SDGs) cannot be reached without putting an end to hunger and without achieving agriculture and food production systems that respect the climate and are sustainable and resilient.

Of 129 countries monitored by FAO, 72 reached the goal of halving the proportion of people suffering from hunger, by 2015, although the U.N. agency issued an alert that in 2016 the fight against malnutrition suffered a setback.