The World Is Running Out of Much Needed New Antibiotics 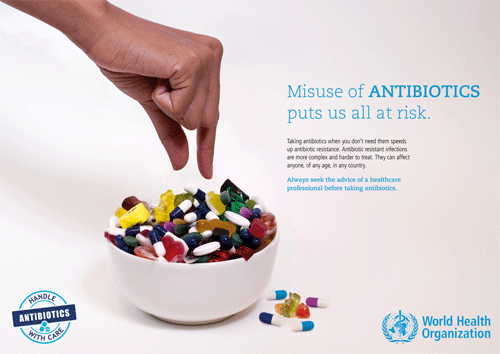 Posters: Misuse of antibiotics and risks. Credit: WHO

ROME, Oct 4 2017 (IPS) - The world is running out of new antibiotics to combat the growing threat of antimicrobial resistance, a new specialised report warns ahead of this year’s World Antibiotic Awareness Week, adding that most of the drugs currently in the clinical pipeline are modifications of existing classes of antibiotics and are only short-term solutions.

The latest World Health Organization (WHO) report on this issue “Antibacterial agents in clinical development – an analysis of the antibacterial clinical development pipeline, including tuberculosis” found very few potential treatment options for those antibiotic-resistant infections identified by the organisation as posing the “greatest threat to health,” including drug-resistant tuberculosis which kills around 250,000 people each year.

In fact, the indiscriminate, excessive use – and misuse – of synthetic products, such as anti-microbial medicines, to kill diseases in humans, agricultural and food systems, may be a major conduit of the anti-microbial resistance that causes 700,000 human deaths each year and has the potential to raise this number to up to 10 million annually.

According to the United Nations, Antibiotic Resistance (AMR) is a natural phenomenon of micro-organisms such as bacteria, viruses, parasites and fungi that are no longer sensitive to the effects of antimicrobial medicines, like antibiotics, that were previously effective in treating infections.

Nevertheless, commercial practices meant to increase benefits have been leading to the dramatic fact that these drugs are more and more used almost entirely to promote animal growth, the UN explains.

“Anti-microbial resistance has the potential to be even more deadly than cancer, to kill as many as 10 million people a year,” the UN warns. See: When Your Healers Become Your Killers

“Antimicrobial resistance is a global health emergency that will seriously jeopardize progress in modern medicine,” says Dr Tedros Adhanom Ghebreyesus, Director-General of WHO. “There is an urgent need for more investment in research and development for antibiotic-resistant infections including TB, otherwise we will be forced back to a time when people feared common infections and risked their lives from minor surgery.”

In addition to multidrug-resistant tuberculosis, the UN specialised agency has identified 12 classes of priority pathogens – some of them causing common infections such as pneumonia or urinary tract infections – that are increasingly resistant to existing antibiotics and urgently in need of new treatments. 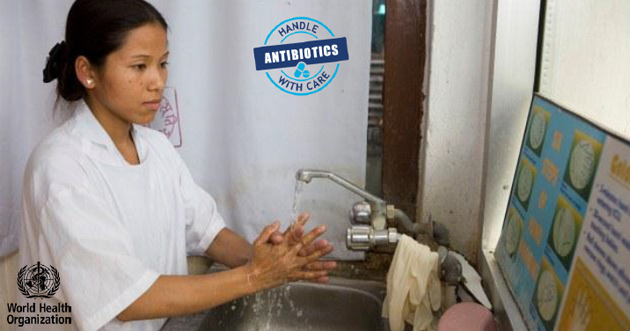 WHO survey reveals widespread misunderstanding about antibiotic resistance . Credit: WHO

The report identifies 51 new antibiotics and biologicals in clinical development to treat priority antibiotic-resistant pathogens, as well as tuberculosis and the sometimes deadly diarrhoeal infection Clostridium difficile. Among all these candidate medicines, however, only 8 are classed by WHO as innovative treatments that will add value to the current antibiotic treatment arsenal.

“Pharmaceutical companies and researchers must urgently focus on new antibiotics against certain types of extremely serious infections that can kill patients in a matter of days because we have no line of defence,” says Dr Suzanne Hill, Director of the Department of Essential Medicines at WHO.

To counter this threat, WHO and the Drugs for Neglected Diseases Initiative (DNDi) set up the Global Antibiotic Research and Development Partnership. On 4 September 2017, Germany, Luxembourg, the Netherlands, South Africa, Switzerland and the United Kingdom and the Wellcome Trust pledged more than 56 million euro for this work.

“Research for tuberculosis is seriously underfunded, with only two new antibiotics for treatment of drug-resistant tuberculosis having reached the market in over 70 years,” says Dr Mario Raviglione, Director of the WHO Global Tuberculosis Programme. “If we are to end tuberculosis, more than US 800 million dollars per year is urgently needed to fund research for new anti-tuberculosis medicines.”

The world health agency explains that antibiotics are medicines used to prevent and treat bacterial infections. Antibiotic resistance occurs when bacteria change in response to the use of these medicines. Bacteria, not humans or animals, become antibiotic-resistant. These bacteria may infect humans and animals, and the infections they cause are harder to treat than those caused by non-resistant bacteria.

“The world urgently needs to change the way it prescribes and uses antibiotics. Even if new medicines are developed, without behaviour change, antibiotic resistance will remain a major threat. Behaviour changes must also include actions to reduce the spread of infections through vaccination, hand washing, practising safer sex, and good food hygiene.” 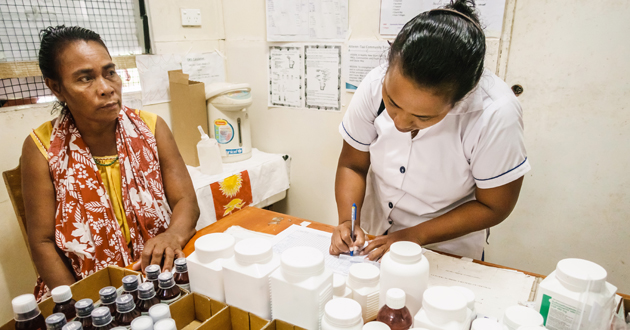 Seek advice from a qualified healthcare professional before taking antibiotics . Credit: WHO

Antibiotic resistance is rising to dangerously high levels in all parts of the world, WHO reports, adding that new resistance mechanisms are emerging and spreading globally, threatening our ability to treat common infectious diseases, while a growing list of infections – such as pneumonia, tuberculosis, blood poisoning and gonorrhoea – are becoming harder, and sometimes impossible, to treat as antibiotics become less effective.

“Where antibiotics can be bought for human or animal use without a prescription, the emergence and spread of resistance is made worse. Similarly, in countries without standard treatment guidelines, antibiotics are often over-prescribed by health workers and veterinarians and over-used by the public. Without urgent action, we are heading for a post-antibiotic era, in which common infections and minor injuries can once again kill.”

How to Prevent, Control

Antibiotic resistance is accelerated by the misuse and overuse of antibiotics as well as poor infection prevention and control. Steps can be taken at all levels of society to reduce the impact and limit the spread of resistance.

The theme of this year’s World Antibiotic Awareness Week (on 13-19 November) is ‘Seek advice from a qualified healthcare professional before taking antibiotics’ and the WHO says that antibiotics are a precious resource, so it is important to get the right advice before taking them.

“This not only ensures you and your family get the best treatment, responsible use of antibiotics will also help reduce the threat of antibiotic resistance.”