UNITED NATIONS, Nov 30 2017 (IPS) - The 57 small island developing states (SIDS), including 20 described as territories which are non-UN members, are some of the world’s most vulnerable – both economically and environmentally.

The United Nations says their vulnerabilities are due primarily to their “small size, remoteness, narrow resource and export base, and exposure to global environmental challenges and external economic shocks, including to a large range of impacts from climate change and potentially more frequent and intense natural disasters.” 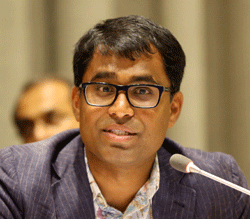 Dhananjayan Sriskandarajah, the secretary general and CEO of CIVICUS

As a result, they are faced with threats of sea-level rise and frequent hurricanes and typhoons resulting in a devastating impact on social and economic development, including on poverty, hunger, health care and human security, which are part of the UN’s 17 Sustainable Development Goals (SDGs).

Of the 37 SIDS who are UN member states, 16 are in the Caribbean, 13 in the Pacific and 8 in the Atlantic and Indian Oceans, Mediterranean and South China seas.

A major conference of non-governmental organisations (NGOs) in Fiji next week (December 4-8)— billed as International Civil Society Week (ICSW) — will specifically focus on the plight of small island developing states in the Pacific.

An annual forum co-organized by CIVICUS and regional or national platforms, ICSW brings together NGOs worldwide for a key global gathering for civil society and other stakeholders to engage constructively in finding common solutions to global challenges.

And for the first time in more than 20 years of international convening, CIVICUS will hold its flagship event in the Pacific region.” The theme of the forum is: “Our Planet. Our Struggles. Our Future.”

Asked why Pacific islands need particular attention, Dhananjayan Sriskandarajah, the secretary general and CEO of CIVICUS, the global civil society alliance, told IPS the Pacific region has been at the forefront of global issues, from climate change to nuclear non-proliferation.

This is partly because as small island states – or large ocean states – they are particularly vulnerable to changes in the environment, whether rising sea levels, ocean acidification or super storms. “But I think that their leadership on these issues is also about much more than the threats they are facing,” he said.

The Pacific Climate Change Warriors often use the phrase “we’re not drowning, we’re fighting”. “To me, this reflects the spirit and strength of how the peoples of the Pacific are responding to climate change — and something that should inspire the rest of the world.

This is why I was delighted when the CIVICUS Board decided to hold this year’s International Civil Society Week (ICSW) – one of the biggest and most diverse gatherings of civil society leaders – in Fiji.

Having grown up in Australia, I fear that there’s a certain creeping “hemispherism” in which Pacific peoples are often overlooked in global discussions and debates, despite everything they have to offer.”

Asked how civil society plans to respond to the growing crises facing the world’s most vulnerable states, including the least developed countries (LDCs), he said: “We can certainly look to our fellow activists in the Pacific for inspiration”.

Indeed, one of the most important ways to address both global and local issues is to remember that often local, and indigenous activists and organisations are at the forefront of action, he noted.

Protecting civic freedoms of local activists, and their ability to organise and mobilise is essential in terms of ensuring that the world’s most vulnerable people don’t get left behind.

“While we’re holding our meeting in the Pacific, it’s important to remember that it’s not just Pacific Island nations that are affected by climate change. We’ve just had an absolutely devastating hurricane season in the Caribbean.”

Other countries at risk include river delta countries, mountainous countries and countries at risk of drought, so really every type of country in terms of geographical features. In reality, the people who will be most hurt by climate change are already among the world’s most vulnerable.

“What’s forgotten sometimes is these same people often have some of the best solutions, so we need to make sure that we’re letting them do their jobs. Our delegates include leaders from the Standing Rock Sioux Tribe, so we’ll have a chance to hear firsthand from some of the Indigenous Environmental defenders, who too often face violence and even death when protecting natural resources from exploitation,” Sriskandarajah said.

Asked if the crises was primarily a shortage of funds for climate adaptation or lack of political will, Sriskandarajah told IPS: “When I think about the biggest risks facing the world, there is no shortage of external risks. From climate change to war to rising populism. But one risk that I see is that civil society doesn’t step up to meet those challenges”.

Often civil society, he pointed out, trades in incremental change, “we’re not at the vanguard of progressive change. So for our part as civil society we need to be an effective force that needs to drive behavioral change, whether on climate action, resisting populism or promoting democracy.”

When it comes to financing, he said, the problem is that the funds are not reaching the right places. One of the biggest challenges across the board, whether in humanitarian financing, international development or climate adaptation, is that too little support flows to the people and organisations working at the local level to address these issues.

For example, only a fraction – around 2 percent – of international humanitarian funds go to local or national organisations in the countries where humanitarian crises happen.

In climate change adaptation and mitigation, funds set aside to go to developing countries, are primarily going to middle income countries, not to the poorest countries, that still lack basic access electricity and are eager to leap frog to sustainable, renewable energy, he added.

Asked what the Fiji meeting hopes to achieve in the long run and whether it will adopt a plan of action, Sriskandarajah said: “Importantly this will also be an opportunity right off the bat for civil society to convene around the decisions made at this year’s UN Climate Change COP 23, which was hosted remotely by Fiji in Bonn, Germany. We’ll be particularly able to hear first hand from Fijian delegates to the meeting about the next steps in areas including the implementation of loss and damage programs.”

“One goal that we particularly hope to achieve at the ICSW is to amplify the voices of young leaders in civil society from around the world. 43 percent of the world’s population is under the age of 30, yet this age group is consistently underrepresented in politics.”

“We have some fantastic young leaders joining our meeting, including UN Youth Envoy, Jayathma Wickramanayake, from Sri Lanka, and Yolanda Joab, from Micronesia, the founder and executive director of Island PRIDE.”

“There will also be launches of several new initiatives that we hope will help in the long-run, ranging from a declaration on climate- induced displacement and a new Global Standard for CSO Accountability that will help with strengthening civil society’s own role.”

Asked what next after Fiji? And will there be a follow up, if any?

ICSW is in part a members’ meeting, Sriskandarajah said, so bringing together all these delegates from around the world has many benefits in terms of learning and sharing ideas. It’s great to see that this year’s ICSW will be just as diverse as our last ICSW held in Colombia in 2016.

He said he is expecting delegates from more than 100 countries, from Afghanistan to Zimbabwe.

As the largest global alliance of this sort, “we hope that CIVICUS can help connect activists and organisations, across issues and across geographies, who are working building a more just, inclusive and sustainable world,” he declared.