António Guterres, Secretary-General of the United Nations, in his remarks on International Day for the Elimination of Violence Against Women

UNITED NATIONS, Nov 23 2017 (IPS) - Every woman and every girl has the right to a life free of violence. Yet this rupture of human rights occurs in a variety of ways in every community. It particularly affects those who are most marginalized and most vulnerable. 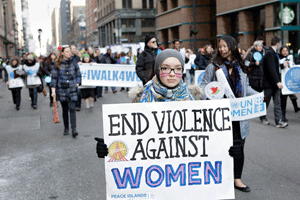 As it was just said, around the world, more than 1 in 3 women face violence throughout their lifetime; 750 million women were married before age 18, and more than 250 million have undergone Female Genital Mutilation.

Women who run for office are more likely to encounter violence than men; women human rights defenders are at greater risk; and horrifying sexual violence in conflict shows no sign of abating.

There is increasing recognition that violence against women is a major barrier to the fulfilment of human rights, and a direct challenge to women’s inclusion and participation in sustainable development and sustaining peace.

There is also increasing evidence that violence against women and girls is linked to other attacks, including violent extremism and even terrorism.

This violence, the most visible sign of pervasive patriarchy and chauvinism, directly impacts women’s physical and psychological health. It affects whole families, communities and societies. While it continues, we will not achieve the 2030 Agenda for Sustainable Development.

The recent emergence of reports detailing sexual harassment in the workplace from many organizations and institutions worldwide shows how pervasive this form of sexual violence is.

I have stressed a zero-tolerance policy towards sexual harassment at the United Nations. The Under-Secretary-General for Management, Jan Beagle, will follow up by chairing an Interagency Task Force that will examine our policies and look at strengthening our capacities to investigate reports and to support victims.

Attacks on women are common to developed and developing countries. Despite attempts to cover them up, they are a daily reality for many women and girls around the world.

As Prime Minister of Portugal, one of my most difficult battles was to win recognition that family violence and especially against women was a serious issue, and that we as a government should take measures to reduce and prevent it. I had to fight against a conspiracy of silence to push through urgently-needed reforms to the police and the judiciary.

It is time to further our collective action to end violence against women and girls — for good. That takes all of us working together in our own countries, regions and communities, at the same time, towards the same goal.

The United Nations is committed to addressing violence against women in all its forms.

First, the UN Trust Fund to End Violence against women has been funding civil society organizations for twenty years. It has successfully awarded $129 million to 463 initiatives across 139 countries and territories.

Second, we recently launched the ‘Spotlight Initiative’, a large-scale effort by the UN and the European Union to eliminate all forms of violence against women. By connecting our efforts with those of national governments and civil society, this initiative aims to strengthen action on laws and policies, prevention, and services for survivors.

Third, the UN Safe Cities and Safe Public Spaces Global Initiative is leading to a comprehensive programme to end sexual harassment and other forms of sexual violence in public spaces.

And fourth, earlier this year I launched a new, victim-centred approach to sexual exploitation and abuse committed by those serving under the UN. I am determined to prevent and end these crimes, which cause such lasting damage to the people and to the institution itself.

These initiatives should help us deliver transformative change. But much more needs to be done. We need strong political will, increased resources and coordinated action.

Violence against women is fundamentally about power. It will only end when gender equality and the full empowerment of women will be a reality.

My policy on gender parity in the United Nations is one step towards achieving this goal so that we can access and capitalize on the full potential of all staff.

More broadly, I hope we are now seeing unprecedented momentum towards empowering women and achieving gender equality across the board and across the globe.

It is time for united action from all of us, so that women and girls around the world can live free from all forms of violence.