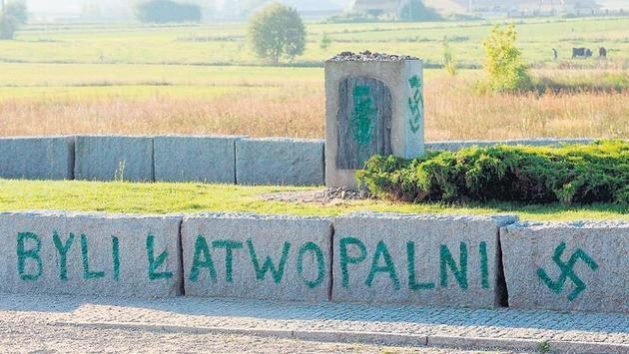 The monument in memory of the Jedwabne massacre, vandalised with pro-Nazi grafitti. In 1941, in that Nazi-occupied town in Poland, 1,600 Jews were massacred by their neighbours. Credit: Courtesy Página 12

BUENOS AIRES, Mar 27 2018 (IPS) - Can an official historical truth be universally imposed in defence of a nation’s reputation? Poland believes that it can, and launched a crusade against those who accuse the Polish State or citizens of complicity with the Holocaust. An Argentine newspaper was its first victim.

An article about a massacre of Jews perpetrated by their own neighbours in a Polish town during World War Two (1939-1945), which was not ordered by the Nazi occupiers, prompted a lawsuit in the Polish courts against the newspaper Página 12 in early March.

Just a few days earlier, an unusual law that caused an international controversy had entered into force in the eastern European country, creating penalties of up to three years in prison for those who claim, anywhere around the world, that Poland or the Poles were responsible for the crimes committed against the Jews in their territory during the Nazi occupation.

“The lawsuit was filed by a group linked to the Polish government. We are going to make an international case of this, not to make ourselves famous, but because they are trying to impose a kind of global censorship for which there are not many precedents around the world,” the chief editor of Página 12, Martín Granovsky, told IPS.

“The article published in Página 12 did not mean to say that all Poles were anti-Semitic or that there were no non-Jewish Poles killed under Nazism. We told about a case of neighbours who tortured and killed other neighbours,” he added.

Granovsky said the lawsuit – of which the newspaper has not yet been notified – will be fought in the courts as well as in the court of public opinion. To this end, Página 12 is contacting organisations that defend journalism and freedom of expression around the world.

The complaint against Página 12, a centre-left newspaper that was founded in the 1980s, after Argentina’s return to democracy following the 1976-1983 dictatorship, was filed by the Polish League Against Defamation, a non-governmental organisation created in 2012 with the aim of “initiating and supporting actions to correct false information about the history of Poland, in particular about the role of the Poles in the Second World War, their attitudes towards the Jews and the German concentration camps,” according to its website.

There is a patent similarity between the organisation’s aims and the philosophy that inspired the bill passed by the Polish parliament on Feb. 1 and signed into law by ultraconservative President Andrzej Duda five days later.

The law, according to a statement issued by Poland’s Foreign Ministry, seeks to “combat all forms of denial and distortion of the truth about the Holocaust, as well as attempts to underestimate (the responsibility) of the real perpetrators.”

“Accusing the Polish State and nation of complicity with the Third German Reich in Nazi crimes is wrong, deceptive and hurtful for the victims,” the text continues.

The U.S. State Department had released a statement, when the Polish parliament was about to sanction the law, saying that it “could undermine free speech and academic discourse.” 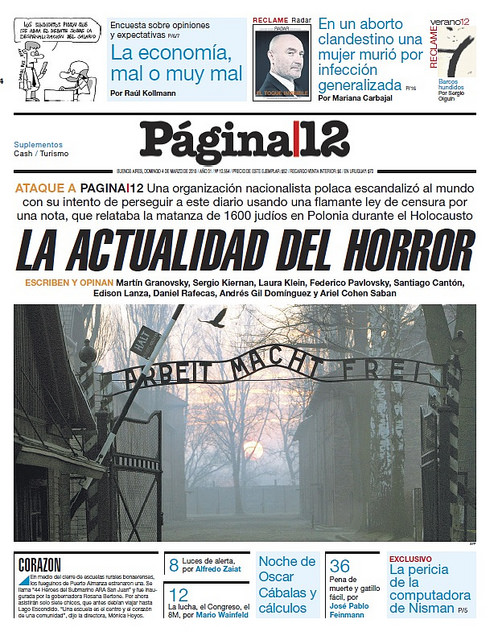 Mar. 4 headline in the Argentine newspaper Página 12, reacting to a lawsuit brought under a controversial Polish law that penalises anyone, anywhere around the world, who states that the Polish State or citizens were complicit in the Holocaust. Credit: Courtesy Página 12

The questioning by the United States is of particular significance since it is the main ally of Poland, a country that has been accused of violations of the rule of law by the European Union, of which that country is a member.

In December, the EU began to take steps to sanction Warsaw for the enactment of laws that, it argued, sought to weaken judicial independence.

The U.S. State Department suggested that the attempt to restrict opinions about Poland’s role in the Holocaust will lead the country to greater international isolation, as it pointed out that the law could have repercussions “on Poland’s strategic interests and relations, including with the United States and Israel.”

For Damián Loreti, former director of Communication Sciences at the University of Buenos Aires, the Polish law on the Holocaust “violates all international standards in the field of freedom of expression and scientific research.”

“This is because it tries to impose an official historical truth, against which there can be nothing said to the contrary,” Loreti told IPS.

The academic said that “a country’s honour is not a legitimate legal subject to be protected by imposing restrictions on free speech, according to the European Convention on Human Rights, and it also violates United Nations resolutions.”

The op-ed that triggered the lawsuit was published by Página 12 on Dec. 18, 2017, under the title “Familiar Faces”. It was written by Federico Pavlovsky, a psychoanalyst who told IPS that he preferred not to make public statements while the case was making its way through the courts.

In his column, Pavlovsky describes “one of the cruelest and most incredible events recorded in the Second World War,” which occurred on Jul. 10, 1941 in Jedwabne, 190 km from Warsaw.

“That day, 1500 people killed or watched another 1600 being killed, the latter of whom were of Jewish origin,” reads the article, adding: “One of the peculiarities of this massacre is that in Nazi-occupied Poland, the Germans did not order the killing or participate in it, they merely authorised the sequence of events and took photographs.”

The op-ed basically collects the information made public in 2001 by historian Jan Gross in his book “Neighbours: the destruction of the Jewish community in Jedwabne, Poland”, which had a strong impact both in that country and in the United States.

Gross is a Pole born in 1947, the son of a Jewish father and Christian mother, who in 1969, during the communist regime, went into exile in the United States.

The Polish law punishes in particular anyone who speaks of “Polish concentration camps”, instead of clarifying that they were in Polish territory but were the responsibility of the Nazi regime, which was occupying the country.

“It is true that the Polish state had ceased to exist and that there was only a Polish government in exile in London, which fought the Nazis,” psychotherapist and writer Diana Wang told IPS. The daughter of Holocaust survivors, she was born in Poland in 1945 and has lived in Argentina since the age of two.

“However, Poland has a long tradition of anti-Semitism at a cultural level, and hundreds of thousands of Poles participated in the murder of Jews and appropriated their property,” added Wang, who heads Generations of the Shoah, an organisation dedicated to keeping alive the memory of the Holocaust in Argentina.

“It’s true that to talk about Polish concentration camps does not exactly represent the historical truth, because they were under the control of the Germans, but everyone has the right to say what they want,” said Wang, who after hearing about the lawsuit published an op-ed in Página 12 titled: “Poland can sue me too.”

Since the lawsuit was filed, the newspaper has published daily articles about the legal case and about the history of Jewish people in Jedwabne.