Why Israel Dropped Out of the Security Council Race: Not Enough Votes 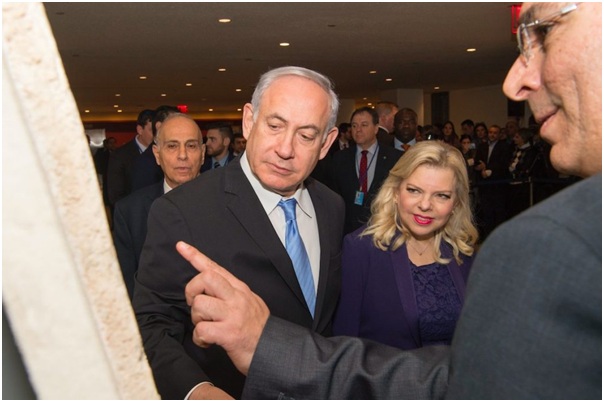 On March 8, 2018, Prime Minister Netanyahu of Israel and his wife, Sara, toured the “3000 Years of History: Jews in Jerusalem” exhibition at the UN in New York. Danny Danon, Israel’s ambassador to the UN, right. Israel recently dropped its campaign to run for a seat in the next term of the Security Council. The election is June 8. Credit: ESKINDER DEBEBE/UN PHOTO

UNITED NATIONS, May 29 2018 (IPS) - From the start, it was a closely watched contest pitting Germany, Belgium and Israel against one another for their regional bloc’s two seats in the next term on the United Nations Security Council. Israel has never held a seat on the Council, and as it celebrates its 70-year membership in the UN in 2018, the country was aiming high for the June 8 election.

But it was never going to be a shoo-in for Israel. It has been a permanent member of WEOG, or the Western Europe and Others Group, since 2004, falling into this UN regional slot first as a renewable member in 2000, because its Arab neighbors refused to let it into their Asia-Pacific group.

So, when Israel announced abruptly on May 4 that it was withdrawing from the Council race, just as a debate for the contestants was being staged at the UN, the campaigning by Germany and Belgium was done.

Competing for the 10 elected seats on the Council seats is always intense, but Israel’s last-minute withdrawal leaves the overall election for the 2018-2019 term with few surprises. Only the Maldives and Indonesia, from the Asia-Pacific group, are left competing — for that region’s open seat.

For the upcoming term, the African group has pre-selected South Africa; the Latin American and Caribbean group has preordained the Dominican Republic. The one seat allotted for Eastern Europe will be open next year.

The work to win a Council seat can begin years before the election. Besides events like cultural affairs (Italy, campaigning in 2016 at UN headquarters, showcased its cinema and food), freebies like felt satchels and more extravagant ventures such as a free trip for diplomats to visit a candidate’s country, the campaigns’ expenses are rarely publicized. There are virtually no rules on spending limits.

According to a report by the CBC on Canada’s candidacy for the 2021-22 Council term, countries have spent anywhere from $4 million to $85 million on campaigns.

The money goes to everything from postage stamps to travel and hospitality, but it does not include the salaries of those appointed to lead the efforts, although not all countries have a designated campaign staff, like Canada.

Israel, however, never had a slogan, website or logo. According to the General Assembly Affairs Branch of the Department for General Assembly and Conference Management, it never received notification from Israel that it was a candidate.

Israel’s campaign was less focused on cultivating an image with the UN press corps and civil society and more on currying favor among countries whose votes it needed. The Israeli mission paid for three visits of groups of UN diplomats to Jerusalem over the last few months.

The delegates were predominantly from countries in Africa and Latin America and Pacific island nations. Some Eastern European countries, such as Hungary, were rumored to have supported Israel’s bid, as well as a handful of US allies, like Guatemala.

When asked a few days after its withdrawal from the race which countries had supported Israel, Ambassador Danny Danon told PassBlue that it was a “long list” but not enough to meet the two-thirds’ threshold to win the election, which is held in the UN General Assembly among all 193 member nations. Danon declined to name any of the countries on the list.

When the Israeli mission announced its decision to drop out, some ambassadors at the UN said they were not surprised. Arab countries in the UN had been actively lobbying against Israel, especially after the Great March of Return in Gaza began this spring and Israeli forces killed more than 100 protesters at the rallies. Various high-level officials said there were rumors that Danon had even hinted about Israel foregoing the race.

One irony of Israel’s decision is that Nikki Haley, the US ambassador to the UN, has repeatedly bemoaned the back-room negotiating and lack of competition in UN elections generally.

The race among Israel, Belgium and Germany had been awkward all along, notably because of Israel’s odd place in WEOG as a Middle Eastern country among Western Europeans and Australia, Canada and New Zealand. The United States is not a member of any regional group but votes in the WEOG bloc.

But in 2013, Germany announced it too would run, meaning Israel and Belgium would no longer be running uncontested. Germany could not have announced its intention earlier because it served on the Council from 2011-2012, and it is against UN election rules to campaign for a Council seat until a country is done with an active term. Germany has repeatedly contended it decided to run because by practice it sought a seat every eighth year.

In March 2018, reports in Israeli and American media contended that Germany’s bid violated an agreement brokered in the 1990s by Richard Holbrooke, the US ambassador to Germany from 1993-1994, to allow Israel to run unopposed for a seat after Israel became a member of WEOG.

In an interview with PassBlue in April 2018, Christoph Heusgen, Germany’s ambassador to the UN, said, “Israel is very grateful to Germany for its help getting Israel out of the Asian group and into the Western Europe and Others Group.

“We have excellent bilateral relations with Israel, but there has never been an agreement between Israel and Germany. We have been very straightforward to all our partners since we arrived at the UN in 1973. We have been a candidate for the Security Council every eight years and we have never departed from this. We want to be very clear in what we do. There was no deal with Israel that I read in some papers, and the Israeli government has never accused us of breaking any deal.”

Both East and West Germany joined the UN in 1973, but when German officials reference the country’s history on the Security Council, they usually refer to West Germany, which has served on the Council about every eight years since its first term in 1977-78. According to the United Nations Association of Germany, until German unification, the two nations took turns serving on the Council.

The May 4 announcement by Israel seemed timed to coincide with the start of the debate among the WEOG candidates. The public forum, sponsored by the New York-based World Federation of United Nations Associations, was designed to make Council elections more transparent.

WFUNA, as the group is known, held hearings for Council candidates for the first time in 2016, but last year there were no competitive slates, so no hearings were held.

Up to the minute the debate began, the organizers still did not know whether Israel would show up, but soon into the program, the Israeli press release arrived in email in-boxes, saying that “after consulting with our partners, including our good friends, the State of Israel has decided to postpone its candidacy for a seat on the Security Council.

“It was decided that we will continue to act with our allies to allow for Israel to realize its right for full participation and inclusion in decision-making processes at the U.N. This includes the Security Council as well as an emphasis on areas related to development and innovation.”

After the debate, a question-and-answer format proceeded. Kelley Currie, the US representative for the UN’s Economic and Social Affairs Council, asked about human rights being discussed more actively in the Security Council. She then gave a statement about Israel, America’s close ally.

“We respect the decision by Israel to postpone its Security Council candidacy today,” Currie said. “We note the United Nations’ poor record of inclusion of Israel in membership in UN bodies and on the Security Council throughout Israel’s nearly 70 years as a UN-member state in good standing. This is a shameful record. The United States looks forward to the day when Israel is treated like every other member state and is appropriately included in this organization.”

Heusgen responded by saying the US gave “a remark, not a question with regard to Israel.”

He continued, “We can only underline that Germany together with others in the west European and others group have seen to it that Israel has become a member of this group to be able to exercise its rights and possibility to participate in this organization.”