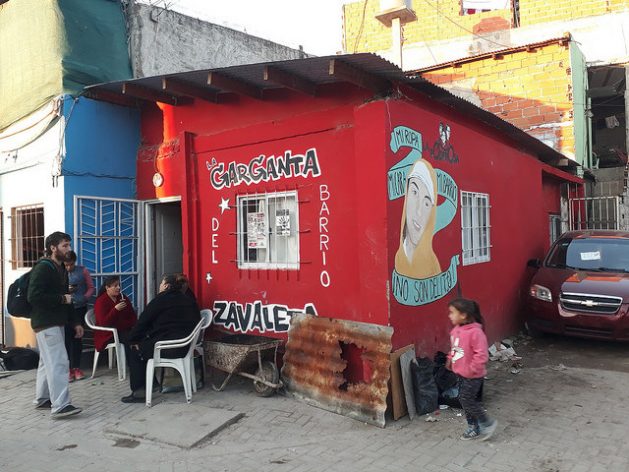 One of the offices in Buenos Aires of La Poderosa, the social organisation that publishes the magazine La Garganta Poderosa and is involved in a number of activities, ranging from soup kitchens to skills training for adults and workshops for youngsters in the “villas” or slums in the capital and the rest of Argentina. Credit: Daniel Gutman/IPS

BUENOS AIRES, Jul 5 2018 (IPS) - Between the dimly-lit, narrow alleyways of Villa 21, only 30 minutes by bus from the centre of the Argentine capital, more than 50,000 people live in poverty. It was there that La Garganta Poderosa (which means powerful throat), the magazine that gave a voice to the “villeros” or slum-dwellers and whose members today feel threatened, emerged in 2010.

“’Villeros’ don’t generally reach the media in Argentina. Others see us as people who don’t want to work, or as people who are dangerous. La Garganta Poderosa is the cry that comes from our soul,” says Marcos Basualdo, in one of the organisation’s offices, a narrow shop with a cement floor and unpainted walls, where the only furniture is an old metal cabinet where copies of the magazine are stored.

Basualdo, 28, says that it was after his house was destroyed by a fire in 2015 that he joined La Poderosa, the social organisation that created the magazine, which is made up of 79 neighbourhood assemblies of “villas” or shantytowns across the country.

From that time, Basualdo recalls that “people from different political parties asked me what I needed, but nobody gave me anything.”

“Then the people of La Poderosa brought me clothes, blankets, food, without asking me for anything in return. So I decided to join this self-managed organisation, which helps us help each other and helps us realize that we can,” he tells IPS.

Villa 21, the largest shantytown in Buenos Aires, is on the south side of the city, on the banks of the Riachuelo, a river polluted for at least two centuries, recently described as an “open sewer” by the Environment Ministry, which has failed to comply with a Supreme Court ruling ordering its clean-up.

Small naked cement and brick homes are piled on each other and crowded together along the narrow alleyways in the shantytowns and families have no basic services or privacy.

As you walk through the neighbourhood, you see sights that are inconceivable in other parts of the city, such as police officers carrying semi-automatic weapons at the ready.

Across the country, villas have continued to grow over the last few decades. Official and social organisation surveys show that at least three million of the 44 million people in this South American country live in slums, without access to basic services, which means approximately 10 percent of the urban population. 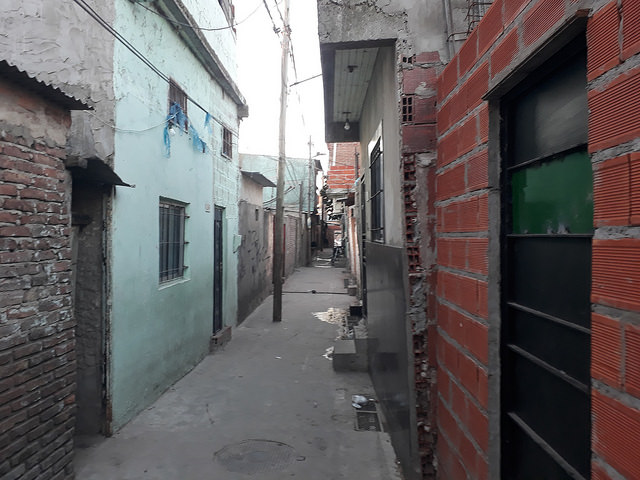 In this alleyway in Villa 21, a slum in the capital of Argentina, is located the house where nine-year-old Kevin Molina was hit and killed by a stray bullet in a shootout between drug gangs in 2013, and the police refused to intervene, according to reports. Credit: Daniel Gutman/IPS

La Garganta Poderosa, whose editorial board is made up of “all the members of all the assemblies” of the villas, also grew, both in its monthly print edition and in its active participation in social networks and other projects, such as a book, radio programmes, videos and a film.

It has interviewed politicians such as former presidents Dilma Rousseff or Brazil and José “Pepe” Mujica of Uruguay or sports stars like Lionel Messi and Diego Maradona of Argentina, and has established itself as a cultural reference in Argentina, with its characteristic covers generally showing the main subjects of that edition with their mouths wide open as if screaming.

The writing style is more typical of spoken than written communication, using idioms and vocabulary generally heard in the villas, and the magazine’s journalism is internationally recognised and is studied as an example of alternative communication at some local universities.

The work this organisation carries out, as a means of creative and peaceful expression of a community living in a hostile environment, was even highlighted by the U.N. Special Rapporteur against Torture, Nils Melzer, who visited the villa in April.

However, recently, after the magazine denounced abuses and arbitrary detentions by security forces in Villa 21, the government accused it of being an accomplice to drug trafficking.

On Jun. 7, all media outlets were summoned by e-mail to a press conference at the Ministry of National Security, “to unmask the lies told by La Garganta Poderosa.” 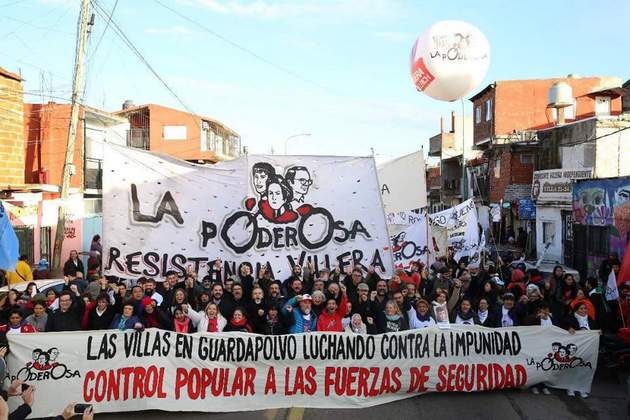 Activists from La Poderosa, on Avenida Iriarte, the main street of Villa 21 in Buenos Aires, on Jun. 1, as they leave for the courthouse to follow a trial against six police officers for alleged brutality against two teenagers from the slum. Credit: Courtesy of La Garganta Poderosa

The next day, Minister Patricia Bullrich stated that the magazine and the social organisation that supports it are seeking to “free the neighbourhood so that it is not controlled by a state of law but by the illegal state.”

“This is a message that authorises violence against us. The minister showed images of our main leader, Nacho Levy, and since that day he has been receiving threats,” one of La Poderosa’s members told IPS, asking to remain anonymous for security reasons.

A few minutes walk from La Poderosa’s premises is the house where Kevin Molina, a nine-year-old boy, was shot in the head inside his house during a shootout between two drug gangs, in 2013.

“The neighbours called the police, but they didn’t want to get involved and said they would come and get the bodies the next day,” says the La Poderosa’s activist.

In recent weeks, the situation has become more tense.

Minister Bullrich’s accusation was a response to the repercussions from the arrest of La Garganta Poderosa photographer Roque Azcurriare and his brother-in-law. It happened on the night of May 26 and they were only released two days later. 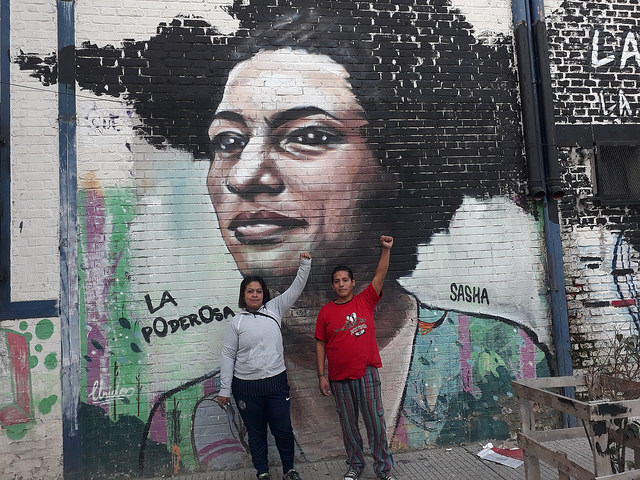 Lucy Mercado and Marcos Basualdo, two members of La Poderosa’s social organisation, pose in front of a mural in Villa 21, a slum in Buenos Aires, that pays tribute to Marielle Franco, the Brazilian politician and human rights activist who was murdered in March in Rio de Janeiro. Credit: Daniel Gutman/IPS

Using his cell-phone, Azcurriare tried to film police officers entering his house, which is located at the end of a short alleyway next to the house of Iván Navarro, a teenager who a few days earlier had testified about police brutality, during a public oral trial.

Navarro said that one night in September 2016, he and his friend Ezequiel were detained without cause in a street in the villa. He said the police beat them, threatened to kill them, stripped them naked, tried to force them to jump into the Riachuelo, and finally ordered them to run for their lives.

In connection with this case, which has been covered and supported by La Poderosa, six police officers are currently being held in pretrial detention awaiting a sentence expected in the next few weeks.

“Ivan Navarro was arrested because he was wearing a nice sports jacket. That’s how things are here in the villa. When someone is wearing brand-name sneakers, the police never think they bought them with their wages, but just assume that they’re stolen,” says Lucy Mercado, a 40-year-old woman born in Ciudad del Este, on the Triple Border between Paraguay, Brazil and Argentina, who has lived in Villa 21 since she was a little girl.

“It’s no coincidence that this is happening now. In April we had filed six complaints of torture by the police. And this very important oral trial. Never in the history of our organisation have we achieved anything like this,” another La Poderosa activist told IPS, who also asked not to be identified.

Azcurriare’s arrest gave more visibility in Argentina to the trial of the six police officers, to the point that on Jun. 1 there was a march from Villa 21 to the courthouse, in which hundreds of members of human rights organisations participated.

“We will no longer stay silent because it is not a question of harassing a charismatic reporter, but of systematically clamping down on all villa-dwellers,” La Garganta Poderosa stated on its social network accounts.