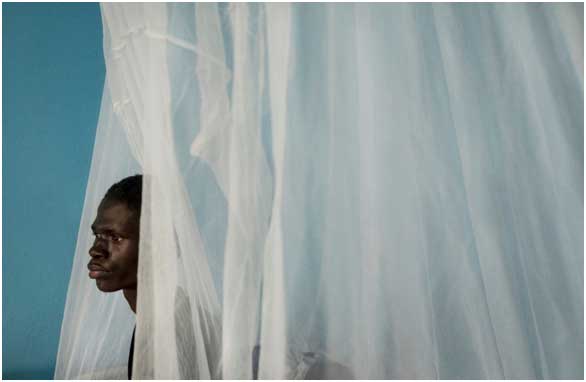 A TB patient in a treatment facility in Liberia. Unlike him, many infected persons do not get the care they need. Credit: Francesco Pistilli

WASHINGTON DC, Oct 10 2018 (IPS) - A disease that we know how to prevent, treat, and cure has become the world’s leading infectious killer: tuberculosis (TB), an airborne bacterial infection.

A new report by the World Health Organization (WHO), launched in New York on September 18, found for the fourth year in a row, that TB remains the world’s single largest infectious killer, responsible for 10 million infections and 1.6 million deaths in 2017.

Still, in many countries, the disease — and those who suffer from it — is overlooked as a normal part of poverty and treated as an unsolvable problem.

Such neglect is the real problem. Currently, we do not know the full extent of who is sick with TB. Out of the estimated 10 million people who became sick with the disease in in 2017, national health systems only identified 6.4 million.

This means they have failed to find and treat one out of every three people, or 3.6 million, with TB. In the TB community, we refer to these people as “missing”; they are real people out there suffering, who are undiagnosed or unreported, and where the quality of care – if there was care at all – is simply unknown.

How can we quell an epidemic where over one-third of people with the disease are missing? The truth is, we cannot. Infected with an airborne infectious disease, these “missing” people unknowingly spread TB to others. It is the responsibility of governments to invest the resources needed to find, treat, and prevent TB.

The good news is during the last two weeks, governments have taken historic steps to fight TB. On September 26, heads of state met in New York for the first-ever United Nations High-Level Meeting (UNHLM) on TB and committed to finding all people with TB, including those who are “missing.”

The Political Declaration of the UNHLM calls on governments to find and treat 40 million people with TB by 2022 — a move that could finally change the course of history for the disease.

To find the missing people, governments must take a few key actions.

To reach the missing millions, each government first needs to understand who is being missed and why. Many people with undiagnosed TB belong to vulnerable groups such as migrants, miners, refugees, children, and people living with HIV.

Sometimes, members of these groups are reluctant or unable to access healthcare due to stigma and fear of displacement. Others access care through the private sector, but their treatment is not reported to the Ministry of Health, so its quality cannot be assured.

Once a government knows who the system has missed, it should implement public health policies that focus on finding and treating those people. For example, if a large portion of missing TB cases are among children, policies should implement TB screening in places that serve children such as pediatric clinics, child care settings, and schools. Linking TB services with other health interventions (e.g., maternal and child health, nutrition, and HIV) can help identify and treat the sick.

Each government needs to improve the effectiveness of its TB program overall by adopting best practices and tools. Contact tracing is extremely effective in finding the missing people with TB. Starting with a person who has active TB, public health officials identify and screen for TB all those who have been in close contact with that person — family members, coworkers, or schoolmates – and screen them for TB.

Even if the contacts are not sick, they can take a prophylaxis that can prevent them from becoming sick with TB. Additionally, governments need to deploy appropriate tools. Microscopes often fail to detect TB in children, so chest X-rays may be a better option. Newer diagnostic tools such as GeneXpert and the LAM urine test have proven particularly effective at finding TB among people living with HIV.

Finally, when it comes to TB, the more you look, the more you find. Former U.S. Vice President Joe Biden once said, “Don’t tell me what you value; show me your budget, and I’ll tell you what you value.” Governments, donors, and the private sector need to back up policies for finding the missing people with funding to treat them.

Experts estimate that current investment in TB needs to be doubled to US$13 billion per year to effectively address TB — a target that countries have agreed to at the UNHLM.

Together, we can end TB

Each of us needs to hold our respective governments accountable to their UNHLM commitments by investing in either their national TB program budgets or foreign assistance.

Every government, as well as philanthropy and the private sector, has a role to play in reaching the UNHLM goal of finding and treating 40 million people with TB by 2022.

Countries that have prioritized finding their missing people, implementing effective policies, and increasing investments have had success. In 2011, the South African Minister of Health Aaron Motsoaledi rolled out the latest TB diagnostic tool, GeneXpert, as the first-line test to diagnose TB across the country.

Since then, the government has pushed TB screening among at-risk groups such a prisoners and mining communities with laudable results. As of 2017, all South African prisoners were screened for TB, and an estimated 90 percent of mines began routinely screening workers for the disease.

TB is preventable and curable and does not have to be the crisis that it is. By making commitments at the UNHLM on TB, governments have taken an important first step to correct this problem.

We in civil society and affected communities are ready to take the next steps with our governments. I am hopeful TB will soon be in the history books, on the list of deadly conditions eradicated from the human experience.