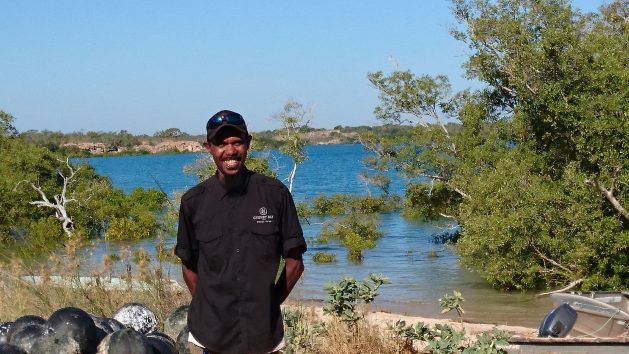 Terry Hunter is a cultural tour guide at Cygnet Bay Pearl Farm. Being an extractive and extensive form of farming, pearl oyster aquaculture is one of the most environmentally sustainable industries. Credit: Neena Bhandari/IPS

Australia is the only country in the world that uses wild oyster stocks. To ensure its sustainability, the pearling industry operates on a government-regulated quota system that sets a maximum number of wild stock pearl oysters that can be caught each year from the Eighty Mile Beach, south of Broome in the state of Western Australia. These wild pearl oyster beds represent the last wild commercial fishery for Pinctada maxima oysters in the world.

There are currently 15 wild stock pearl oyster licence holders, but the majority of licences are owned by Paspaley subsidiaries. As Paspaley Group of Companies’ Executive Director, Peter Bracher tells IPS, “Our wild pearl oyster quota is hand-collected by our divers. This is an environmentally friendly and sustainable form of commercial fishing that causes no damage to the seabed and produces no wasteful by-catch. Elsewhere in the natural habitat of Pinctada maxima, which includes much of the Indian and Pacific Oceans, the wild oyster populations have been depleted by overfishing.”

In recent years, the Total Allowable Catch (TAC) has been set between 600,000 and 700,000 pearl oysters. The 2016 TAC was 612,510 pearl oysters and the total quota that could be seeded was approximately 907,670 (557,670 wild stock and 350,000 hatchery-produced), according to the Western Australia Department of Primary Industries and Regional Development’s 2016-17 Status Reports of the Fisheries and Aquatic Resources.

Australian pearling companies have been conscious of the need to protect the oysters’ habitat as there is a strong co-relation between Kimberley’s pristine environment and the production of high-quality pearls.

“The nutrient-rich Kimberley waters, in which our pearls are farmed, are our most valuable asset and monitoring their condition forms an integral part of our operations and management. We have opened our infrastructure and expertise to the academic world and established the Kimberley Marine Research Station to encourage independent marine research and to help bridge the indigenous cultural knowledge with scientific knowledge, which we believe will help in our attempt to ensure our production practices are sustainable,” says James Brown, the third-generation owner and managing director of Cygnet Bay Pearls, the first all-Australian owned and operated cultured pearling company.

Being an extractive and extensive form of farming, pearl oyster aquaculture is one of the most environmentally sustainable industries. Oysters are voracious filter feeders drawing their nutrition from micro-organisms like algae from the water column and in so doing effectively clean the water.

Professor Dean Jerry, Deputy Director at James Cook University’s (JCU) Centre for Sustainable Tropical Fisheries and Aquaculture tells IPS, “Pearl farms also act as fish attraction devices (FAD). The oyster lines, buoys and panel nets hung in the ocean provide habitat and structure for larger and small fish. Often this is the only form of structure in the ocean where farms are providing habitat for marine life to live.”

But Pinctada maxima oysters are very sensitive to pollution and environmental changes. “Global warming and increased carbon dioxide levels in the ocean will make it harder for the pearl oysters to quickly and efficiently lay down calcium carbonate for the mother of pearl that makes the nacre for the pearl. This means that oysters will have to spend more energy for growth, leaving less for immune functioning thereby increasing their exposure risks of disease as rises in water temperatures speed up microbial and parasitic lifecycles,” Jerry adds.

Since 2006, Australian companies have battled Oyster Oedema disease and Juvenile Oyster Mortality Syndrome, which impacts oysters before they are seeded with a pearl and may result in 90-95 percent mortality. Scientists haven’t yet been able to find a causative agent for the two diseases, which have almost halved the worth of the industry.

To make the industry more sustainable, Jerry says, “We need to adopt technology to make oyster breeding programs more productive and disease tolerant. Pearl oysters will really benefit from selective breeding, which will help them grow faster and therefore get to a point where they can be seeded at a younger age and ultimately produce the pearl quicker.”

It takes two years for an oyster to grow where it can be seeded and another two years for when the pearl is harvested. During these four years, the oysters have to be regularly cleaned. “It can cost up to AUD1 an oyster each time, which is a huge financial cost to businesses. If we can get to a stage of harvesting the pearl from a younger oyster, say three years, it will not only increase financial sustainability, but also environmentally sustainability,” Jerry adds. 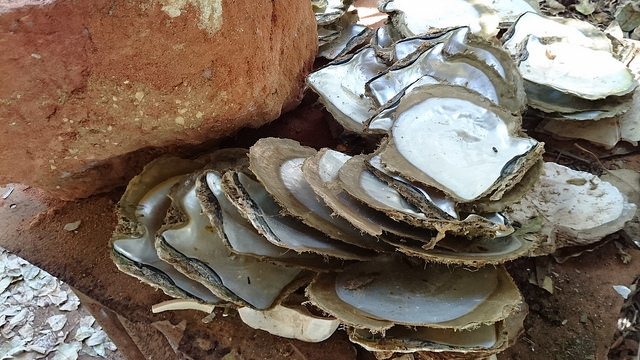 Mother of Pearl at Cygnet Bay. Australia is the only country in the world that uses wild oyster stocks. To ensure its sustainability, the pearling industry operates on a government-regulated quota system that sets a maximum number of wild stock pearl oysters that can be caught each year. Credit: Neena Bhandari/IPS

Hatchery-bred pearl oysters are now a major part of pearl production. Three oysters are required to create one pearl. A nucleus is inserted from one oyster into another healthy oyster with a small piece of mantle tissue selected from a donor oyster. With time, the mantle tissue that produces nacre (the secretion known as mother-of-pearl) grows completely around the nucleus, forming a pearl sac in which the pearl grows.

An oyster can be reseeded up to three times, and, when it reaches the end of its reproductive life, it is harvested for the mother of pearl shell used in jewellery and inlay for furniture, and pearl meat.

Last year, the Australian South Sea pearling industry of Western Australia and the Northern Territory, have been certified sustainable by the Marine Stewardship Council (MSC).

Australia is the world’s first pearl fishery to be certified against the MSC’s standard for sustainable fishing. MSC Oceania Program Director Anne Gabriel says, “It’s an exciting development and opens the door to engage a whole new world of consumers on the important issue of fisheries sustainability. We are looking forward to seeing the MSC ecolabel on wild pearls in the jewellery and fashion markets of the world, as well as on mother of pearl and pearl meat products. By buying sustainable pearl products, consumers can also play their part in maintaining healthy ocean ecosystems and securing the future of our fish stocks.”

Paspaley, Australia’s leading pearling company, exports over 95 percent of its production to wholesalers and jewellery manufacturers around the world. Bracher tells IPS, “We sell to many of the world’s leading brands for which ethical supply chains are a high priority. Although we cannot communicate directly with their end-customers, our environmental credentials are an important differentiator as a supplier.”

Cygnet Bay Pearls uses tourism as a way of educating consumers about the making of the Australian South Sea Pearl and the environment it thrives on. Brown tells IPS, “Our new business model welcomes general public to the farm. Our Giant Tides tour shows visitors the unique Kimberley marine environment, which is now regarded as having the largest tropical tides by volume of water and also the fastest tidal currents in the world. This is what powers our pearl farm and allows Australians to grow the finest pearls in the world.”

Terry Hunter, a fourth generation Bardi man, is a cultural tour guide on the Cygnet Bay Pearl farm. He tells IPS, “Cygnet Bay has been my playground. My father and grandfather worked here. The Browns have always recognised, acknowledged and respected Indigenous knowledge. When I hold a mother of pearl oyster shell, I feel alive – connected through ceremony and ancestors.”

Traditionally, the indigenous Aboriginal Bardi and Jawi tribes collected the mother of pearl to make a riji, which boys wear as a pubic covering at the time of initiation or formal admission to adulthood. The engravings on the shell symbolise their connection to earth and water. Now, the riji is worn for ceremonial purposes.

Bart Pigram, an indigenous Yawuru man, worked as a pearl shell cleaner and now owns and operates Narlijia Cultural Tours and shares the unique pearling history of Broome with visitors. He tells IPS, “The environment’s health is integral to not only sustaining the pearling industry, but also the local indigenous communities.”

The pearling industry employs about 800 people. The value of the pearl aquaculture sector was about AUD78.4 million for the 2015-16 financial year, according to the Australian Bureau of Agricultural and Resource Economics and Sciences (ABARES) Australian fisheries and aquaculture statistics 2016 report.