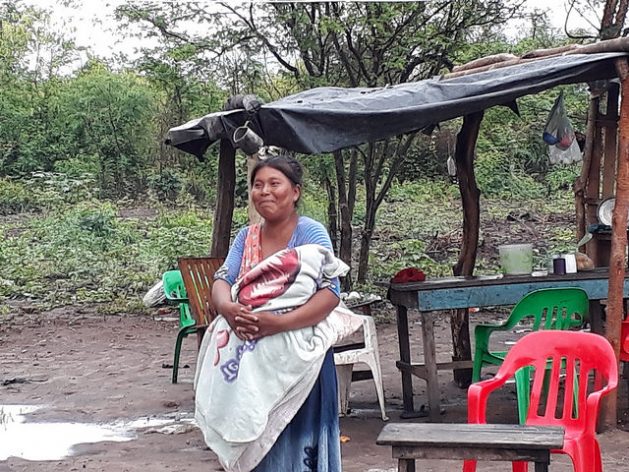 A Wichí woman holds her baby in her arms in a community of this indigenous people in the northern Argentine province of Salta, in the Chaco ecoregion, where poverty levels are high. She is an illustration of the poverty in which 59 million people live in Latin America's rural areas, 48.6 percent of the total rural population. Credit: Daniel Gutman/IPS

BUENOS AIRES, Nov 24 2018 (IPS) - Only 18 percent of the population of Latin America and the Caribbean live in rural areas, but these are increasingly hotbeds of poverty, and climate change is playing a major role in this phenomenon.

Stories of extreme drought followed by flash floods that virtually destroy entire crops and wreak chaos abounded during the region’s first Week of Agriculture and Food, held Nov. 20-23 in the Argentine capital.

The more than 1,000 officials, experts and civil society representatives who participated in the meeting agreed that the fall in agricultural yields and migration from the countryside are visible consequences of global warming.

"In the south, Argentina had the worst drought in 50 years this year, after crops had been lost to flooding the previous year. And in the Caribbean, Dominica's entire agricultural crop disappeared from the map in 2017 because of devastating hurricanes." -- Julio Berdegué

“This year we had a lengthy drought that destroyed about 80 percent of the basic grains of subsistence farmers, and two months later we saw tremendous flooding that affected 23,000 hectares in the south of the country,” Honduran deputy agriculture minister José Alberto Benítez told IPS.

“We are the country most affected by climate change in the world. And when we see that thousands of young Hondurans have started migration caravans to Mexico or the United States, it’s largely because it’s increasingly difficult for them to stay in rural areas,” he added.

There are 59 million poor people in the countryside, according to the Panorama of Rural Poverty in Latin America and the Caribbean, which was presented during the Week of Agriculture and Food by the United Nations Food and Agriculture Organisation (FAO), which organised the event together with the Argentine government.

This figure marks a historic setback, because between 1990 and 2014 rural poverty in the region had fallen from 65 percent to 46 percent.

However, from 2014 to 2016 it increased more than two percentage points and today it affects 48.6 percent of the rural population. Of that proportion, 22.5 percent live in extreme poverty.

FAO regional representative Julio Berdegué told IPS that “no country is safe from the impact of climate change on food production.”

“In the south, Argentina had the worst drought in 50 years this year, after crops had been lost to flooding the previous year. And in the Caribbean, Dominica’s entire agricultural crop disappeared from the map in 2017 because of devastating hurricanes,” he said.

The senior regional official warned that “preparing or half preparing for climate change will take hundreds of billions of dollars. Latin America and the Caribbean are not going to be able to finance this on their own.”

“We need international funding, but official, government-to-government aid is not sufficient. We need a lot of private investment, in renewable energy, in new forms of infrastructure or in resilient agricultural systems,” said Berdegué. 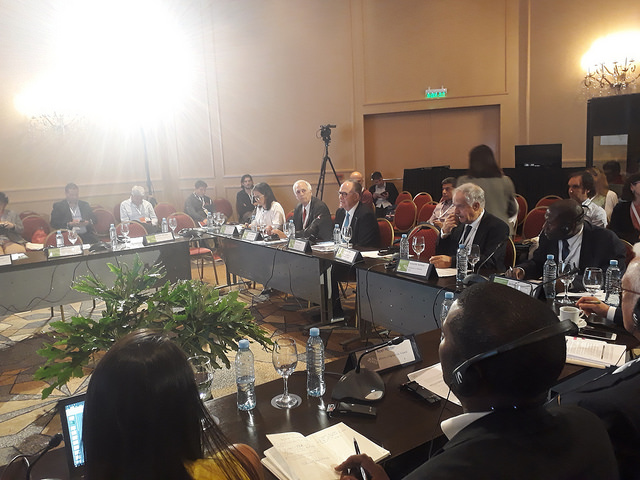 Ministers and agricultural authorities debate in Buenos Aires on the socio-economic impacts of climate change on Latin American rural areas, during one of 40 sessions held in the Argentine capital to assess the future of agriculture and food in the region. Credit: Daniel Gutman/IPS

FAO’s Panorama of Rural Poverty reveals that rural workers in Latin America earn less than half of what urban workers earn. The average income of the former, in 2015, was 363 dollars a year, compared to 804 dollars for those working in towns and cities.

The result is that many flee the hardship of rural life. In Honduras, 76 percent of those who leave their places of origin leave behind rural municipalities. And the proportion stands at 70 percent in El Salvador and 61 percent in Guatemala.

In that sense, she said that “each country must find its own path, because technology transfer has not been successful, and there is no agenda for joint, integrated work,” despite the resources that the international community allocates to the issue of climate change.

El Salvador, he said, has been hit hard, since “all the groundwater monitoring networks show a tendency towards a reduction,” and global warming makes water even more necessary.

“The best future scenario, of a temperature increase of 1.5 degrees Celsius, will mean that maize crop productivity in El Salvador will fall 30 percent over the next 15 years,” he said.

In a world where the agricultural agenda is increasingly overlapping with the environmental agenda, the sector is also singled out for the generation of greenhouse gases.

According to FAO’s data, 61 percent of the 33 countries in the region pledged at the United Nations to reduce agricultural emissions, in the Paris Agreement on Climate Change, reached in December 2015.

The director of the Inter-American Institute for Cooperation on Agriculture (IICA), Manuel Otero, stressed that agriculture, “although it generates problems, can also be part of the solution.”

“Many of the measurements linked to climate change are taken with indicators that we have not generated ourselves. This means they do not take into account situations in which, far from emitting, we are actually sequestering carbon,” he told IPS.

For Otero, “Argentina is a clear example with its widespread zero tillage system. And Brazil is making incredible progress with agri-silviculture integration.”

The director of IICA also drew attention to the fact that “there are many losers with global warming, but a few winners, which are the temperate countries.”

The Buenos Aires meeting came at a particularly dramatic time for the region: in the last three years, the number of hungry people has increased.

There are 39 million hungry people, despite the fact that, according to FAO, Latin America and the Caribbean produce enough food not only for the region’s 646 million inhabitants but also for 169 million more.

In addition, 294 million people (46 per cent of the population) suffer from some form of malnutrition.

The extraordinary movement of resources generated by climate change could also be an opportunity for the region, according to Deissy Martínez Barón, coordinator of the Center for Research on Tropical Agriculture (CIAT), an institution based in Cali, Colombia.

“Since the 1990s there has been a downward trend in the participation of the agricultural sector in the economies of the countries of the region. This could be due to climate change,” she explained.

“In order to do this, it is essential to build sustainable agriculture adapted to the climate. If we do nothing, there are 36 million people in the region whose food security is at risk due to loss of agricultural yields. But climate change can give us the financing we need,” she concluded.