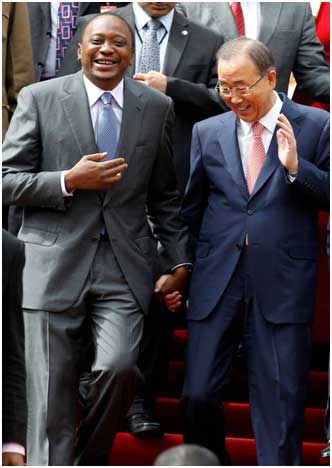 NAIROBI, Kenya, Dec 12 2018 (IPS) - One of my proudest accomplishments as the former UN secretary-general was playing a part in the ambitious global agenda for sustainable development (SDGs), including the goal of universal health coverage (UHC) by 2030.

Kenya’s leadership was key. To give momentum to the SDGs an Open Working Group was established in 2013. One of the co-chairs of the working group was Ambassador Macharia Kamau, who was the Permanent Representative of Kenya to the UN.

As the world celebrates UHC Day on 12 December 2018, more and more countries across Africa, including Ethiopia, Rwanda, South Africa and Senegal, are taking up the mantle of health for all and providing strong leadership to make the vision a reality.

The UN Secretary General Mr Antonio Guterres has said, “When we invest in health – particularly of women and adolescents – we build more inclusive and resilient societies.”

With 11 million Africans being pushed into extreme poverty each year because of high out-of-pocket expenses on health, there is an urgent need to explore innovative models that provide adequate care alongside financial protection.

One country which could provide a blueprint for others to follow is Kenya, where the president is personally invested in delivering UHC.

I forged a strong connection with President Uhuru Kenyatta over our shared commitment to maternal and child health. In 2015, at the UN General Assembly in our presence, a public-private partnership to improve the health of over 3.5 million women, newborns and children in Kenya was announced. Led by the Government of Kenya, it brought together the UN, the private sector and civil society to leapfrog improvements in maternal and child health.

We found a strong advocate in First Lady Margaret Kenyatta, whose Beyond Zero Campaign ensured the scale-up of proven interventions to improve maternal and child health. The government also moved to eliminate payments for primary and maternal health services in public facilities.

These were important first steps.

Now I am heartened by Kenya’s remarkable political commitment to expand UHC to include every man, women and child. Affordable health care is one of the top priorities of President Kenyatta’s “Big Four” development agenda for his second term in office.

To achieve progress at such a rapid pace, Kenya plans to increase health spending by nearly 20% between 2018 and 2021 and strengthen primary health care. The country has set out to design a model that provides quality health care while ensuring it remains affordable.

Approaches are being tested over one year in four counties – each with its particular health challenges. These pilots aim to identify gaps in delivering UHC before nationwide rollout so that lessons can be learned. The acid test will be how quickly the country can go to scale and ensure no one is left behind.

Big data, technology and innovation will be critical to achieve progress at scale. Eight countries in Africa, including Kenya, have committed to use data to identify priority areas for health systems improvement, track and trend progress over time, and enhance accountability by using a new Primary Health Care Performance Initiative tool.

According to a forthcoming analysis by McKinsey, Kenya will need an investment of US$6 billion over and above government resources and individual subscriptions in the next decade to reach government targets for primary health care.

The Government of Kenya and the UN family in Kenya have come together to form the Kenya Sustainable Development Goals (SDG) Partnership Platform, which is bringing together civil society and the private sector to catalyze new models for quality, affordable health care delivery. They are seeking new ways to unlock health care financing, which has been identified by the Dag Hammarskjold Foundation as a best practice.

The reforms Kenya is pursuing will have a major impact on people’s lives and livelihoods and help stem poverty. Nearly 1 million Kenyans are being pushed below the poverty line every year as a result of catastrophic out-of-pocket expenses.

With such high-level political commitment, I am confident that Kenya will forge its own way with courage and resolve by ensuring the health and well-being of all its citizens.

Ban Ki-moon is a former UN Secretary General, and former South Korean Foreign Minister. He is the co-chair of the Ban Ki-moon Centre for Global Citizens. The Centre was founded in 2017 and is co-chaired by Ban Ki-moon and by Heinz Fischer, President of the Republic of Austria from 2004 – 2016.