Roma the Movie: The Hidden Drama of Domestic Workers 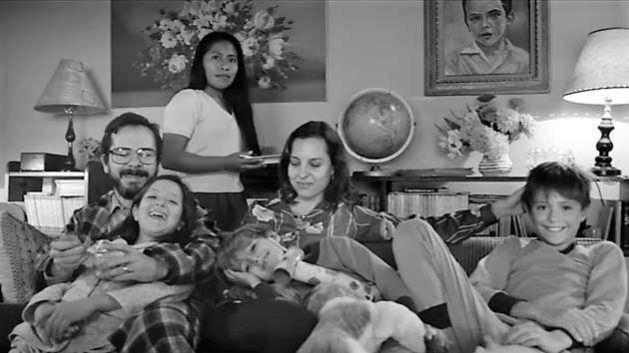 STOCKHOLM / ROME, Feb 18 2019 (IPS) - Roma, a 2018 Mexican film written and directed by Alfonso Cuarón, is currently on a triumphal journey through the world. It won the Golden Lion at the Venice Film Festival, the best director and best foreign language film at the Golden Globe Awards, best director and best picture at the Critics´ Choice Awards, best film, best direction and best cinematography at the British Academy Film Awards. Furthermore, Roma has a record high ten nominations for the upcoming Academy Awards (The Oscars). Not at all bad for a black-and-white movie, which appears to have been directed by a sophisticated cineaste and custom-made for an art-house audience. Moreover, Roma deals with a highly controversial and seldom treated theme – the plight of poor, women domestic workers.

Of course, it was with high expectations that I sat down to watch this highly acclaimed movie, but it produced more disappointment than admiration. Let me begin with the aesthetics. I got an uncanny feeling that I had seen cinematography like this before. I was reminded of movies that Michelangelo Antonioni directed during the 1960s. He did not build his movies around traditional plots or intrinsic, character analysis. He rather used visuals as a tool for his message, which nevertheless was quite radical, critical of social ills and the feeling of alienation they created. Antonioni’s films were characterized by scant action and dialogue, complex and detailed composition and extremely long and well-planned shots. His characters were submerged in their inner life, unable to communicate their feelings, while Antonioni made their surroundings reflect their feelings. His persons moved around in simple, but at the same time visually stunning environments, saturated with moods and atmospheres.

Alfonso Cuarón´s movie is made like that and apart from Antonioni it reminded me of another skilled director, Luis Buñuel. Watching the wealthy people in Roma carousing on a hacienda during New Year´s Eve I came to think about Buñuel´s devastating criticism of the emptiness of higher class life in his The Discreet Charm of the Bourgeoisie and when a fire starts in the woods I was back in a surreal scene from Miloš Forman´s The Firemen´s Ball. I spite of these impressive models Cuarón´s movie lacks the desperation, the shocking condemnation of inner-city poverty of Buñuel´s Los Olvidados, which he in 1950 filmed in the slums not far from Colonia Roma, the wealthy middle class district in Mexico City, where Cuarón´s film takes place twenty years later. Roma has the refinement and aesthetics of Italian neo-realistic movies, but lacks the heart-braking compassion of films like Umberto D. and Bicycle Thieves, in which the desperate and poor protagonist in the end cries out: “I curse the day I was born!”

Like in the movies mentioned above, the setting of Cuarón´s characters is depicted with cinematographic splendour, but they do not advance the strong compassion you feel for a person like da Sica´s poor pensioner or bicycle thief. Cuarón´s “Cleo” Gutiérrez is an indigenous live-in maid in a wealthy middle-class household. Unfortunately, she remains a stereotype, as if she had been cast and solidified in the same mold as so many other working people imagined by upper middle-class moviemakers. A strong, silent, all-enduring and all-tolerating heroine, depraved of a voice of her own.

Cleo appears to speak the language of the Zapotecs of the valleys of Oaxca in southern Mexico, but we learn nothing about her roots among a people who uphold their strong traditions and who gave birth to Mexico´s president Benito Juárez (1806 – 1872), who from poor, rural, indigenous origins rose to become a well-educated, urban professional and a worldwide symbol of Latin American nationalism and resistance to foreign intervention.

Quiet and patient Cleo is dating Fermín, equally poor but a ruthless egocentric, who in an absurd scene naked is displaying his martial art skills, confessing to the usually silent Cleo: “I owe my life to martial arts. I grew up with nothing, you know.” Cleo becomes pregnant and Fermín avoids all responsibilities, insulting Cleo by calling her gata, cat, a common slur for maids “unable to take care of themselves”. Her employers sympathize with her and Cleo continues to work for them, receiving good medical care, thanks to the family’s connection to a major urban hospital.

The general background to Cleo´s drama is that the family father is leaving his wife and their four children, as well as the politically motivated Corpus Christi Massacre of June the 10th 1971, when 120 unarmed protesters were killed. Fermín happens to be part of the paramilitary Halcones, Falcons, who were guilty of the slaughter. The weakest moment of the movie is when this Fermín suddenly appears with a gun in the store where Cleo is looking for a crib for their expected child and he kills a man in front of her, at the same time as she goes into labour and is brought to the hospital by the mother of her employer. In spite of excellent care her baby is born dead. In connection with this comes the film´s most revealing scene: When Cleo is taken to the delivery room, the grandmother Teresa is asked by a nurse about Cleo’s last name, her date of birth and if she has insurance. Teresa cannot answer any of those questions.

Here the movie, as well as the reality, reveal themselves – poor women who work as maids are not considered as close friends and family members. Their employers often declare that “they are part of the family”, but this may serve as a means to deny them decent wages and social security. In spite of its shallowness, its lack of social, psychological and political sting Roma makes us aware of the plight of female, domestic workers; their poverty, defencelessness and marginalisation. Nevertheless, the soft, apolitical approach of Cuarón may just as well be a whitewash of inequality and discrimination and result in what I heard a Mexican woman state on TV: “Roma constitutes a homage to all the brave women who make it possible for us other women to make our contribution to society.”

As of June 2018, there were 2.2 million domestic workers in Mexico. Around 95 per cent of them were women and more than half of them had an indigenous background. The International Labour Organization (ILO) estimates that there are at least 67 million domestic workers worldwide, not including child domestic workers, and that this number is increasing steadily in both developed and developing countries. Approximately 83 percent are women and many are migrant workers.1 For the most part, domestic work is demanding and undervalued. Even if legislation protecting domestic workers exists in many countries, it is seldom enforced. Domestic work is generally poorly paid and regulated. It is also common that domestic workers are subject to serious and various forms of abuse. Maybe a change is on its way. In July 2011 an ILO Convention on Domestic Workers was adopted.2 It recognized domestic workers as workers with the same rights as other labourers and it was entered into force on 5th September 2013. However, the Convention is still far from being implemented everywhere. In spite of its shortcomings a popular film like Roma might constitute a small step in the right direction.