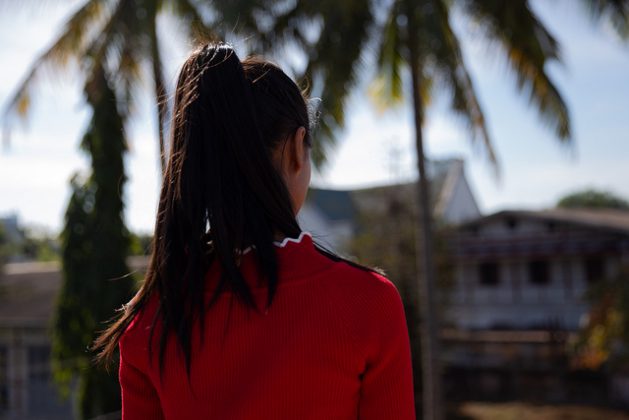 Women and girls from Myanmar are increasingly being trafficked as “brides” to China. Aung Ja* was 18 when a woman from Myitkina, northern Myanmar, convinced her to take a ‘factory’ job in China. She was rescued in 2017 and is taking part in a UN Women-supported trafficking prevention programme. Photo: UN Women/Stuart Mannion

UNITED NATIONS, Mar 22 2019 (IPS) - Women and girls from Myanmar are increasingly being trafficked as “brides” to China, a human rights group found.

In a new report, Human Rights Watch (HRW) documented numerous cases of women and girls from Myanmar’s Kachin and northern Shan States who were trafficked and forced into sexual slavery in China, as well as the alarming lack of law enforcement on the issue.

“Myanmar and Chinese authorities are looking away while unscrupulous traffickers are selling Kachin women and girls into captivity and unspeakable abuse,” said Acting Women’s Rights Co-Director at HRW and author of the report Heather Barr.

“The dearth of livelihoods and basic rights protections have made these women easy prey for traffickers, who have little reason to fear law enforcement on either side of the border,” she added.

Over the past 40 years, conflict in Kachin and norther Shan states has caused long-term displacement and left many struggling to survive.

As humanitarian aid is largely blocked by Myanmar’s government, internally displaced people (IDPs) living in camps do not receive enough food and renewed fighting has pushed families to the brink of desperation.

Since many men are taking part in the conflict, women often become the sole breadwinners for their families and have no choice but to seek work across the border in China. But often they are enticed under false pretences, falling prey to traffickers.

“Those living in the camps are without money or anything. Not being able to make ends meet, it is women and girls who pay the price,” said a worker from Kachin Women’s Association (KWA) which assists trafficking victims.

Another Kachin activist echoed similar sentiments, stating: “Normally the target is the family who are facing financial crisis…but now the [brokers] are targeting the IDP camps. It’s a better place to gather people. They are in one space. Most of the brokers are involved as relatives or acquaintances.”

HRW found that out of 37 survivors interviewed, 15 were recruited by friends and 12 by an acquaintance. Another 6 were recruited and sold by their own relatives.

Many of the trafficking survivors interviewed were sold for between 3,000 and 13,000 dollars. Once delivered to their “buyers,” they were often locked in a room and raped frequently so as to make them pregnant.

After fleeing conflict in Kachin State and living in an IDP camp, 16-year-old Seng Moon was told of a job as a cook by her sister-in-law in China’s Yunnan province.

In the car, Seng Moon’s sister-in-law gave her something she said prevented car sickness causing Seng Moon to fall asleep immediately. She told Human Rights Watch that she woke up with her hands tied behind her back and was left with a Chinese family.

“My sister-in-law left me at the home…the family took me to a room. In that room I was tied up again…they locked the door—for one or two months…each time when the Chinese man brought me meals, he raped me,” Seng Moon said.

After another couple of months, she was told that she was married to the Chinese man who continued to be abusive.

Once Seng Moon was pregnant and gave birth, the husband said,“No one plans to stop you. If you want to go back home, you can. But you can’t take my baby.”

After two years, she was able to escape with her son.

Other survivors however were forced to leave behind their children. Of the people interviewed, eight left behind children.

Some trafficked women and girls were also forced to be both “brides” and labourers.

Ja Seng Nu was held for almost a year on a watermelon farm near Shanghai, locked in a room, physically abused, and raped every night by the son of the family who owned the farm “because [they] wanted a child as soon as possible.”

At the same time, she had to get up very early, cook breakfast for the farm’s workers, and then work in the fields all day.

Those who were caught trying to escape usually faced even more abuse.

Mai Mai Tsawm, who was trafficked at 21, told HRW that she met a woman who tried to run and after being caught by her “husband,” he tied her neck and hands to the end of a motorbike and dragged her behind the bike.

Tsawm said she did not know whether the woman had survived or not.

If they are able to escape successfully, many trafficked women and girls have difficulty grappling with trauma and face stigma within their communities.

“Most victims face terrible situations. They come back, and they are totally different from us. They are just gazing, staring…People who just came back don’t even dare to go outside and show their faces…They feel guilty for being [trafficked],” a KWA worker said.

A Long Road to Justice and Recovery

Among the reasons for the rise in trafficking has been attributed to the “woman shortage” in China.

According to the Chinese government’s 2000 census, there were over 120 boys born for every 100 girls between 1996 and 2000. The World Health Organization has stated a normal ratio at birth is approximately 105 boys to 100 women.

The estimated 30 to 40 million “missing women” in the East Asian nation is partly due to its one-child policy which led to a preference for boys.

The gender imbalance is leaving many Chinese men without wives. In fact, by 2030, projections show that 25 percent of Chinese men in their late 30s will never have married.

Despite evidence for trafficking, HRW expressed concern over the lack of law enforcement and services to prevent trafficking and help those who have been trafficked.

The organization found that law enforcement officers in both China and Myanmar made little effort to recover trafficked women and girls, and those that sought help to find missing relatives were turned away and told that they would have to pay if they wanted they police to act.

HRW also reported that when trafficking survivors escaped and ran to the Chinese police, they were sometimes jailed for immigration violations rather than treated as crime victims.

“The Myanmar and Chinese governments, as well as the Kachin Independence Organization, should be doing much more to prevent trafficking, recover and assist victims, and prosecute traffickers,” Barr said.

“Donors and international organizations should support the local groups that are doing the hard work that governments won’t to rescue trafficked women and girls and help them recover,” she added.

HRW also urged for both China and Myanmar to develop formalized recruitment pathways for people from Myanmar to safely travel and legally obtain employment in China and establish measures to encourage reporting of suspected trafficking.

They also stressed the need to provide comprehensive services to survivors to combat stigma and provide access to livelihood support such as education and training and end the practice of jailing trafficking survivors.