Why the Prosecution of Julian Assange is Troubling for Press Freedom 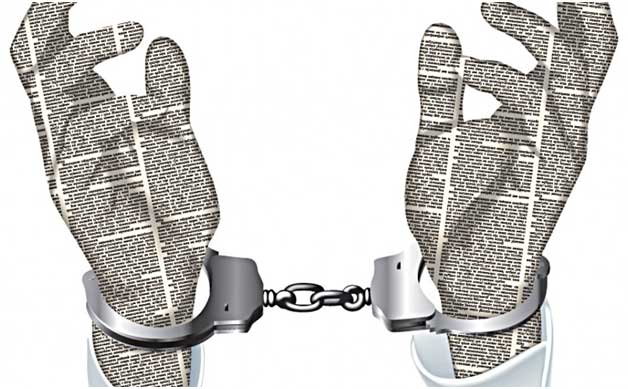 For years, journalists and press freedom advocates worried the U.S. would prosecute Assange under the Espionage Act for the publication of classified information, a scenario that potentially would have set a devastating legal precedent for U.S. news organizations that regularly publish such material.

During the Obama administration, officials ultimately said they would not prosecute because of the possible consequences for press freedom.

It was unclear whether the Trump administration would have the same compunction: while Trump praised WikiLeaks, then-CIA Director Mike Pompeo labeled it a “non-state hostile intelligence service.”

Trump has shown little concern for freedom of the press, once allegedly urging then-FBI Director James Comey to jail journalists. (In response to news of Assange’s arrest, Trump said he would leave it to the Justice Department).

In this context, the charge on which Assange was arrested seemed modest: A single count of conspiracy (with former Army Pfc. Chelsea Manning) to “commit computer intrusion” under the U.S. Computer Fraud and Abuse Act, with a maximum penalty of five years.

Unlike the publication of classified information, hacking computers is not a tool for reporters. Some journalists were quick to point out this out.

“[The] charge here is attempting to help crack a password to steal classified material. Didn’t work but would news orgs do that? (Not in my experience.),” said Greg Miller, a national security reporter at The Washington Post, said on Twitter.

But press freedom advocates, and some journalists, have not expressed relief based on the indictment. A host of organizations, including CPJ, spoke out against the prosecution. Here’s why:

(1) The indictment is flimsy and could simply be a pretext to punish Assange for publishing classified information.

The diplomatic time and resources expended between three countries to detain Assange strikes some observers as disproportionate to the single computer misuse charge.

The indictment is vague about the exact nature of the aid Assange allegedly provided Manning in the course of their interaction, but it does not appear that Assange successfully hacked any password.

Even if his attempts were successful, they would have helped Manning cover her tracks, but not let her break into a system to which she didn’t already have access.

Prosecutors have wide range of latitude; it’s worth remembering that the Obama administration likely had all the same information, but declined to pursue an indictment.

Matthew Miller, a former Justice Department spokesperson in the Obama administration, told The New York Times that he thought the charge was justified but “This is not the world’s strongest case.”

So, is it just a pretext on the part of the U.S. government to punish Assange for the publication of classified information — a practice that should be constitutionally protected? The issue comes in a time of heightened concern for investigative journalists and national security reporters.

Since the September 11 attacks, the government has increasingly classified large amounts of material and punished those who share it with the press. CPJ has written extensively about the chilling effect of this crackdown on reporting in the public interest.

“Given the nature of the charge — a discussion 9 years ago about an unsuccessful attempt to figure out a password — I think it’s fair to debate whether this is a fig leaf for the government punishing someone for publishing stuff it doesn’t want published,” tweeted Scott Shane, a national security reporter for The New York Times.

“If it wasn’t Julian Assange, it would be very unlikely you’d see this prosecution,” Cindy Cohn, executive director of the Electronic Frontier Foundation, told CPJ. “This is what over-broad discretion in prosecution does, it gives them a pretext for going after people they don’t like.”

(2) The charge could be a placeholder, with more to come.

Another reason why the charge may seem so modest: It could be the first of several. Last week, CNN cited U.S. officials promising additional charges against Assange. The press freedom implications of any future charges could be significant–especially if they involve the Espionage Act.

“It may be part of a larger case,” Ben Wizner the director of the American Civil Liberties Union, told CPJ. The current indictment already cites the Espionage Act and describes the cracking of a password as part of a conspiracy to violate it.

The DOJ’s legal strategy could be to pile on more charges after Assange is extradited. The extradition treaty between the U.S. and the U.K. says an individual can only be charged for the “offense for which extradition was granted” or similar offenses, but it also stipulates how governments can waive this rule.

Assange has an extradition hearing on May 2, which gives the U.S. government time to develop new charges.

(3) The language of the case seems to criminalize normal journalistic activities.

While the charge against Assange relates to the alleged conspiracy to hack a password, the language of the indictment sweeps in a broad range of legally protected and common journalistic activity.

Count 20 of the indictment states, “It was part of the conspiracy that Assange encouraged Manning to provide information and records from departments and agencies of the United States.”

The indictment goes on to characterize a number of journalistic practices as part of a criminal conspiracy, including use of a secure message service, use of a cloud-based drop box, and efforts to cover Manning’s tracks.

The cultivation of sources and the use of encryption and other means to protect those sources are essential to investigative journalism. While the government may include these details to show intent or to describe the means and context for the alleged criminal action, they seem to go beyond what is necessary.

Barton Gellman, who led The Washington Post’s Pulitzer Prize-winning reporting on the Snowden documents, told CPJ, “If asking questions and protecting a source are cast as circumstantial evidence of guilt, we’ll be crossing a dangerous line.”

“A lot of the way the crime is described here could be applied to other journalists,” Wizner, at the ACLU, told CPJ. “If the government wanted to just target the attempted intrusion, they could have written a very different complaint.”

(4) The Computer Fraud and Abuse Act is incredibly broad.

In all of the concern over the Espionage Act, journalists may not have sufficiently raised alarm over the law under which the U.S. charged Assange: the Computer Fraud and Abuse Act (CFAA). “Thinking we should breathe a sigh of relief because it was the CFAA instead of the Espionage act is premature.” Cohn, of Electronic Frontier Foundation, told CPJ.

The CFAA carries its own set of free expression issues. While it encompasses clearly illegal behavior like hacking, it also criminalizes “unauthorized access to a computer.”

Manning was prosecuted under the CFAA in addition to the Espionage Act, but prosecuting a publisher under the under the CFAA for conspiracy in obtaining the classified information could potentially create a dangerous legal model.

While reporters do not conspire to decrypt passwords, they are often aware of, and might actively discuss with sources, activities that could fall under the broad frame of “unauthorized access.”

As the Cato Institute’s Julian Sanchez wrote on Twitter, “The way ‘helping to hack’ is being charged is as a conspiracy to violate 18 USC §1030 (a)(1) [of the Computer Fraud and Abuse Act]. And good reporters conspire with their sources to do that constantly.”

She added that any journalists who don’t think there are broader press freedom implications to the Assange prosecution are “whistling past the graveyard.”

In a video statement accompanying the tweet, he cited Assange’s repeated “intervening in the internal affairs of other states” via WikiLeaks publications.

Ecuador had previously restricted Assange’s access to the internet based on allegations that he was interfering in U.S. elections and in the referendum for Catalan independence from Spain.

While Assange’s unusual presence in a diplomatic mission created tensions–both inside the embassy and in Ecuador’s broader international relations–withdrawing asylum is an extreme measure, and one that could have troubling implications if it was done in response to publishing.

*Alexandra Ellerbeck, CPJ’s North America program coordinator, previously worked at Freedom House and was a Fulbright teaching fellow at the State University of Pará in Brazil. She has lived in Chile, Bolivia, and Brazil.

*Asher-Schapiro is CPJ’s research associate for North America. He is a former staffer at VICE News, International Business Times, and Tribune Media, and an independent investigative reporter who has published in outlets including The Atlantic, The Intercept, and The New York Times.