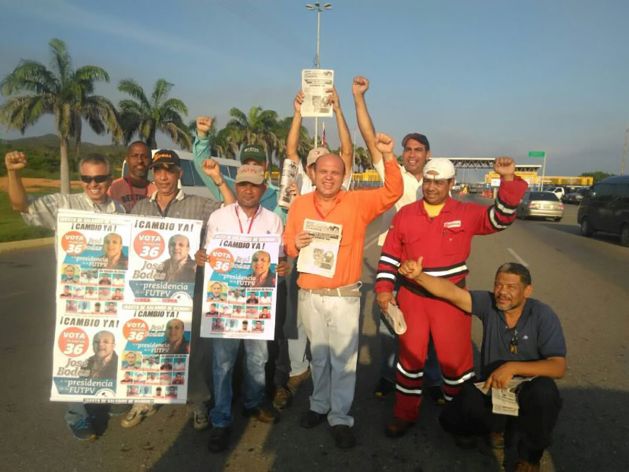 José Bodas, in the middle, is an oil worker and a trade union activist. Credit: José Bodas.

STOCKHOLM, Apr 30 2019 (IPS) - Maduro or Guaidó? Neither, according to José Bodas. He is the former General Secretary of the FUTPV, Venezuela’s main oil workers trade union, and according to him, neither the president nor the challenger from the opposition has the people’s best interests in mind.

More than 60 countries, including the United States, have recognised Juan Guaidó as legitimate interim president. What is your stance on the matter?

“The fact that the United States is trying to decide the presidency of Venezuela is an unacceptable intrusion on our national sovereignty. Donald Trump has referred to Latin American countries as “shithole countries” and called Mexican people “criminals”, he violates the human rights of refugees in the United States. I don’t believe that the United States, Bolsonaro in Brazil, the Lima Group, or Duque in Colombia will be there to protect human rights or workers’ rights in Venezuela. They will protect the interests of multinational companies.”

What is your view on Maduro? How has his government been treating trade unions in the country?

The majority of the members work for the state owned oil company PDVSA.

José Bodas, a plant worker at PDVSA’s refinery in Puerto la Cruz since 30 years, was the General Secretary of FUTPV from 2009–2014.

Bodas is part of the trade union current C-Cura, which is connected to the Party for Socialism and Liberation (PSL) which, in turn, describes itself as marxist. In Venezuela, different currents within the unions fight over influence. The political stance of a union might change depending on who gets elected.

“Nicolás Maduro’s government isn’t progressive or left wing. It doesn’t defend workers’ rights. It’s a government that oppresses, with a financial policy that is destroying collective interests in order to pay off foreign debt. The government has cut off all import of food and medicine. It is suffocating the democratic freedom of young people and workers.”

Is it true that the government is labelling critics from the trade union “counter-revolutionaries”?

“The government has imposed laws to protect the oil industry and to outlaw trade union activity and limit the right to strike, both for private and public employees. Those of us who are still fighting have been labelled counter-revolutionaries or agents from foreign organisations, such as NATO. Even workers who sympathise with the government but who are standing up for union rights are being called counter-revolutionaries. Therefor, in Venezuela, trade union organisation is a criminal activity.”

What is the financial situation like for your members at the moment?

“Our salaries are at five dollars per month. It is close to slave wages, and it is destroying any chance of decent working conditions and collective agreements. And it forces public employees to go out and support the government party.”

How should the crisis in Venezuela be solved?

“We believe in an alternative programme for our country and we are certain that Nicolás Maduro’s government would never support that. It’s said that the flight of capital from the country through the oil industry exceeds 25 billion dollars per year. We believe in an oil industry controlled entirely by Venezuelans. With the interest from the oil money, we could invest in decent wages, in pensions, in an agricultural reform that would ensure we can produce the food we eat, in education, in health care. We believe in a strong Venezuelan oil industry, free from foreign interests. But to accomplish that we need to beat Nicolás Maduro, and we don’t have any faith in Juan Guaidó either.”

“We need democracy in order to beat the financial policies that this government is running, the suffering caused by these extremely low wages. And that is something that us Venezuelans need to do together; young, old, the indigenous population, farmers, and women. But not through a military coup and not through foreign actions.”