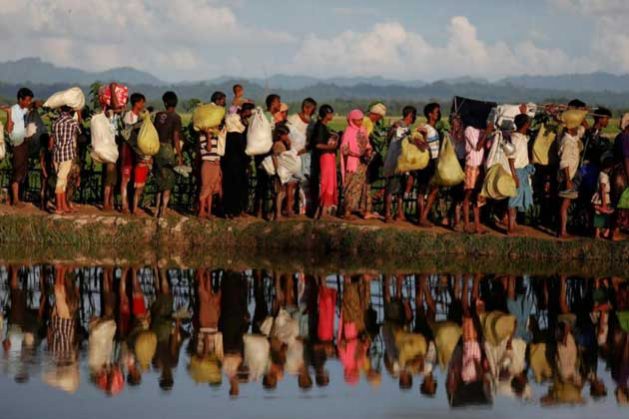 May 3 2019 - (The Daily Star) – Some one million Rohingyas face serious health risks due to acute air and water pollution in the crammed camps of Cox’s Bazar, says a new study that assessed environmental conditions in one of the world’s largest refugee settlements.

The use of firewood as the main fuel in the small tents with no ventilation facilities, high frequency of vehicular movement, proximity of drinking water points to latrines and absence of a proper waste management are the main factors posing danger to the refugees.

Diarrhoea, fever, jaundice, cough and skin, heart and respiratory diseases have become some of the very common health problems in the camps, said the study.

Air quality analysis in the refugee camps showed the level of carbon dioxide (CO2) and nitrogen dioxide (NO2) were higher both indoors and outdoors than Bangladesh standard.

Bangladesh standard for CO2 is 350 parts per million (ppm) but the study found it between 600 to 1,207ppm at the Rohingya camps.

The standard for NO2 is 0.057ppm but in Rohingya camps it was up to 0.1ppm. The level of volatile organic compounds (VOC) or organic chemicals in air was also very high, the report said.

“Breathing in high amounts of carbon dioxide can also be life threatening. Prolonged exposure to carbon dioxide may cause changes in bone calcium and body metabolism,” said the report.

Excessive levels of these gases may cause some acute and chronic health effects such as suffocation, incapacitation and unconsciousness, headaches, vertigo and double vision, inability to concentrate, tinnitus and seizures, it added.

During the survey, 61 percent of the respondents were being treated for medical conditions like wheezing, tightness of chest, rapid breathing, eczema, high fever, skin irritation, shortness of breath and burning or irritated eyes.

Increased transportation and use of firewood and deforestation could be the potential factors for the rise in such gases, the report said.

The study found that 76 percent households in Rohingya camps typically cook at least thrice a day in the rooms with no ventilation facilities. Besides, some 2,000 hectares of forest was destroyed due to the Rohingya settlement and firewood collection.

Particulate matter, or solid and liquid particles suspended in air, in November last year was significantly higher than the Bangladesh standard.

Exposure to such inhalable particles can affect lungs and heart, and children and older adults may be at greater risk from exposure to those.

About volatile organic compounds, the report said higher concentrations of VOC may cause irritation of lungs as well as damage to the liver, kidney or central nervous system.

The ICCCAD analysis found all surface water samples and a significant (highest 62 percent) number of groundwater samples tested contain coliforms, a group of bacteria. One of its possible reasons could be the proximity of tube wells to latrines.

Additionally, manganese was detected in 48 percent tested samples at concentrations higher than the Bangladesh standard (0.1 mg/L), which may impede cognitive development in children.

Survey results showed that diseases and illnesses such as diarrhoea, coughing and skin diseases are major concerns in the camp area. Since 38 percent of the surveyed water supply lines are passing through the drainage system, chances of spread of diseases from waste are higher.

The report says only 17 percent respondents throw their waste in a public bin while others do it in the open space.

There is no proper drainage system in the camps — around 30 percent of them are mud-built, 37 percent open, and only 19 percent concrete drains. The disposed waste stays for a longer period of time, polluting the atmosphere.

This inadequate drainage facility results in foul odour and spreads mosquitoes and flies. While this study could not explore if there was any connection between unmanaged solid waste and camp health issues, 623 respondents showed concerns about poor waste management in their areas.

The ICCCAD recommended creating environmental awareness within the Rohingyas and local communities, engaging them in its protection, setting up a proper drainage system and sewage treatment facilities and ensuring solid waste management.

Dr Azharul Islam Khan, head of hospitals at ICDDR,B, said he has no idea of air pollution in Rohingya camps but water and sanitation status is much better than the initial days of the influx in 2017.

“Also, massive cholera vaccine and health campaigns were undertaken. These measures helped prevent outbreak of diseases,” he told this correspondent.

The ICDDR,B official, however, expressed worries that shortage of funding may be an issue in terms of promoting health campaigns — something that the international community needs to look at.