An Urgent Need to Advance Peace

Dr Marina Caparini is a Senior Researcher and Director of the Governance and Society Programme at SIPRI. Her research focuses on peacebuilding and the nexus between security and development. 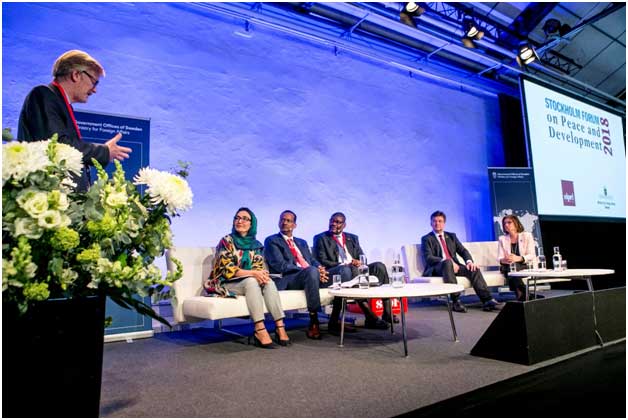 At the 2018 Stockholm Forum

STOCKHOLM, May 10 2019 (IPS) - Let us be blunt: the world is in crisis. Peace, human rights, our planetary ecosystem, and our systems of conflict management and global governance are under enormous strain.

Global military expenditures reached 1.8 trillion in 2018, their highest level in real terms since the Cold War, driven by great power competition between the US and China. The ‘Doomsday clock’ is now set at 2 minutes to midnight, as the world has moved closer than ever to nuclear self-destruction as a result of US withdrawal from the Iran nuclear deal (the Joint Common Plan of Action (JPOA)), and withdrawal from the Intermediate Range Nuclear Forces (INF) Treaty, and uncertainties about North Korea’s nuclear plans.

And, buttressed by regular reports about the growing effects of global warming, rapidly declining biodiversity and the extinction of thousands of species, climate change is now widely acknowledged by citizens and experts in many countries as the world’s biggest threat.

The past decade has seen a reversal of the long-term trend of declining civil wars. According to the UN-World Bank publication Pathways to Peace, the world has seen sharp increases in the number of internal armed conflicts in the world over the past decade, most involving numerous non-state armed groups, and such conflicts are both increasingly internationalized and protracted.

Mostly as a result of conflict, some 68.5 million people are currently displaced, with the overwhelming majority of refugees residing in poor or middle-income countries. While there are often multiple, complex causes of conflict, key structural factors include weak institutions in combination with political and economic exclusion.

In developing and post-industrial states alike, factors such as growing income inequalities and the continued failure of most countries to significantly control corruption are undermining governance and faith in the ability of states and the political class to uphold the public good. Across the world we are witnessing a rise in populism rooted in anti-pluralism and exclusionary nationalist politics, attacks on the basic democratic tenets and a crisis of democracy.

And within the leading global governance bodies, such as the UN Security Council, divisions among major powers and failure in leadership to constructively address current crises in Libya, Sudan, Yemen and Venezuela are calling into question the continued credibility of such arrangements.

Within this fraught context, leading individuals from the humanitarian, development and security fields will be convening in Stockholm next week*. The Stockholm Forum on Peace and Development, cohosted by SIPRI and the Swedish Ministry of Foreign Affairs, will discuss how the world can better respond to emergencies and crises, and how it can stabilize and strengthen prospects for peace and longer term development.

By bringing together subject and regional specialists, humanitarian workers, human rights defenders, peace researchers, police and military representatives, political leaders and policy makers, the Forum seeks to stimulate essential, sometimes difficult, conversations among those who are working to support peace, rule of law and development embodied by the 2030 Agenda for Sustainable Development.

The international and professional diversity of those who will attend reflects the recognition of the need for interdisciplinary understanding of drivers of conflict, coordination across sectors and comprehensive approaches in responding to violence, hunger and injustice.

Substantial participation by representatives from the Global South reflects the need to develop truly people-centred approaches that are context specific, politically informed and locally owned. It embodies the realization that technocratic, template approaches to preventing conflict and assisting shattered states and societies are not acceptable and do not work.

With its commitment to advancing peace through evidence-based data, research and analysis, SIPRI is proud to co-host the Forum and to contribute to global efforts to find solutions to the grave problems that confront us.