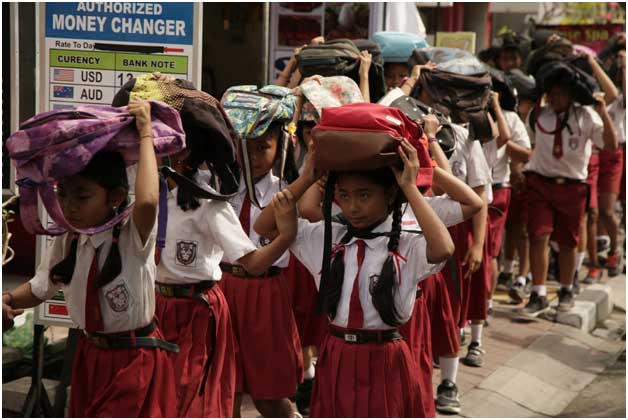 UNITED NATIONS, Nov 5 2019 (IPS) - Once considered rare in their occurrence, in the last 10 years tsunamis have struck nearly every year: from Samoa to Chile, and from Iceland to New Zealand.

Usually triggered by a massive earthquake which is impossible to predict, there is often very little time to respond to a tsunami warning. Yet, if the warning is clear and people know what to do, thousands of lives can be saved.

As we mark World Tsunami Awareness Day November 5, I’d like to express my appreciation to the Government of Japan for supporting the United Nations Development Programme (UNDP) in raising tsunami awareness among school children in disaster prone countries in Asia and the Pacific.

In Japan, every school child knows what a tsunami is, and how to respond to it. Now, through this initiative, Japan’s good practice and experience is helping school children in the region learn and improve their preparedness.

Under the three-year partnership until mid-2020, at least 10-12 schools each in 23 tsunami prone countries would have updated their preparedness plans and tested them through drills.

To date, we have already trained over 100,000 students and teachers from about 250 schools in 19 countries. Preparedness plans have been updated, School Committees have been set up, evacuation routes have been identified – and in some instances newly built – and safe evacuation zones have been designated.

What started off as strengthening school preparedness has gone beyond expectations in many countries. I’d like to elaborate by sharing four country examples.

In Indonesia, one of the most tsunami prone countries in the world, we held our very first drills under this initiative. The drill was in a school in Bali, right in the middle of a highly urbanized locality.

Since the latest risk assessment had shown that the school premises would get inundated in the event of a tsunami, students were made to evacuate and move to higher ground – in this case to the roof of a six-storey hotel.

The drill resulted in creating awareness on the need for providing a safe evacuation area and led eight hotels in the locality to sign agreements with the local government offering their space for safety to the local school children and neighbouring communities.

In the Pacific Ocean, the terrain in Gizo, Solomon Islands looks quite different from Bali, with the sea on one side and steep hills on the other. Fifty two children and adults had lost their lives in the 2007 tsunami that had hit the island.

The school drills exposed the lack of preparedness and new evacuation routes were constructed to help students safely escape to higher ground. The National Disaster Management Organisation is now committed to scaling up drills in other vulnerable islands.

The reality in the Maldives is yet again unique. The 2004 tsunami swept over nearly all the atolls. Unlike other countries, there were no waves, rather it was as if the low-lying islands were sinking.

Survivors do not wish to recall the devastating memories and most of the young people have little or no knowledge of a tsunami. The safest evacuation is by boat and by moving to higher ground – in this case a building that may not be higher than two-storeys. Most islands have only one school, so our preparedness initiative helped to educate the entire community.

Typhoons and storm surges hit the Philippines, often creating tsunami like waves with very little warning. While earthquake drills are regularly conducted, our tsunami preparedness initiative has spurred the government to combine earthquake with tsunami drills.

Together with Government agencies and local partners, we’ve held several drills in disaster prone provinces reaching 60,000 students and teachers in the country.

Based on the positive feedback of the preparedness initiative from students, teachers and communities in various countries and our own experiences, we have developed a regional guide for schools to help them to be prepared so that we can scale up awareness and preparedness in more at risk schools.