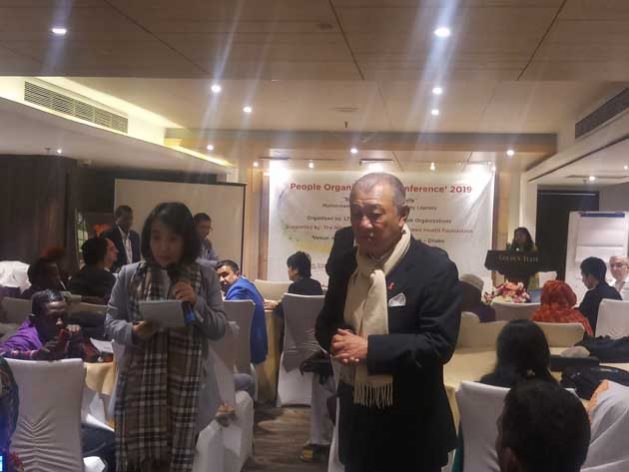 Chairman of the Nippon Foundation and Sasakawa Health Foundation in Japan Yohey Sasakawa speaking at the Conference of Organizations of Persons Affected by Leprosy in Dhaka, Bangladesh. Credit: Rafiqul Islam / IPS

Sasakawa was speaking at the opening of the first ever meeting of organizations working on leprosy in Bangladesh.

“The government has already announced the Zero Leprosy Initiative that will help eliminate the discrimination the leprosy patients have been facing,” he told a conference in the country’s capital. Prime Minister Hasina on Wednesday (December 11) also addressed the conference and Sasakawa reminded activists that the country’s leader expressed her commitment to make Bangladesh free from leprosy in the next decade.

Several organizations working in the field of leprosy, like members from the Leprosy and TB Coordinating Committee (LTCC) and People Organizations with support from The Nippon Foundation and Sasakawa Health Foundation, are attending the gathering.

Bangladesh’s leprosy burden ranks fourth-highest in the world. Four thousand new cases are detected annually – an average of 11 to 12 cases per day over the last 10 years. Every year an estimated 3000 leprosy sufferers are affected by complications that require specialized treatment in hospital.

Although the the number of leprosy cases are declining, more than one-third of leprosy patients are facing the threat of permanent and progressive physical and social disability.

Calling upon the leprosy patents to extend their support to the government in this regard, Sasakawa said Bangladesh’s Ministry of Health could not fight leprosy alone.

Sasakawa, also a World Health Organisation (WHO) Goodwill Ambassador, said: “You, the leprosy patients, know better about the disease than doctors. Your government is working to eliminate leprosy by 2030. And we are here to learn how we can help your government fight leprosy.”

He asked the participants to play a strong role in eliminating leprosy in Bangladesh. “I hope you will convey the lessons you learnt from the conference today to your community.

“If you all raise voice together, it would be stronger. So, you have to be stronger to fight leprosy (in Bangladesh). Your support is important to reach the goal,” he said.

About his journey as WHO goodwill ambassador, Sasakawa said he has been working on fighting leprosy around the world for the last 40 years.

“I have been providing assistance to about 120 countries, while I have traveled to different parts of the world 700 times to help (leprosy patients),” he said. “No matter which country I visited, the plight of the leprosy patients is the same.”

Sasakawa said he came here to share his opinion and experiences on leprosy from his journey. “I am very happy seeing the faces of leprosy patients who are participating in the conference, as this is the first time … we have met together,” he added.

Highlighting the nature of leprosy patients, the Goodwill Ambassador said the people who get disabilities suffering from leprosy and those become disabled due to road accidents are not the same, because leprosy is an infectious disease.

“That’s why leprosy patients fear to meet and their communities also do not accept it,” he said.

Role of NGO’s in the fight against Leprosy-free world

Sasakawa also praised the role of the NGOs, including Lepra Bangladesh, TLM Bangladesh and the Damien Foundation, in fighting leprosy in the country.

Shandha Mondal, district coordinator of SHALOM (leprosy), a local NGO working in Meherpur, said Prime Minister Hasina’s announcement on the Zero Leprosy Initiative will increase the voice of the people who have been working on leprosy elimination, and this will help them fight leprosy together.

Motiur Rahman, a leprosy patient of Gazipur, said the prime minister always gives priority to leprosy patients. For example, he said he had sought accommodation from the Bangladesh premier and he received a house from the Government.

The participants attending the national conference said that the prime minister’s call to local pharmaceuticals to produce medicines and distribute among leprosy patients free of cost is really commendable.

Speaking at the National conference on Zero Leprosy Initiative 2030, Prime Minister Hasina said many Bangladeshi pharmaceutical companies export medicines, and she called on these companies to produce drugs for leprosy locally and distribute those among leprosy patients free of charge.

But, they said, the PM should also instruct the authorities concerned to launch a new programme and announce a special budget for leprosy. This would be more helpful in fighting leprosy in Bangladesh, they said.