KUALA LUMPUR, Malaysia, Apr 27 2020 (IPS) - Thandika Mkandawire (1940-2020) had a wicked sense of humour. But he was so considerate that he often made himself the butt of his jokes which typically had a moral. When others struggled to pronounce his surname, he would help them out, “Me kinda weary”. 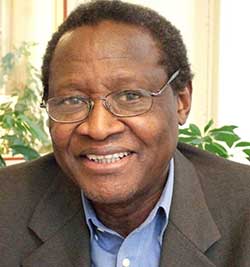 But as tired as he might have been, he would often summon up the energy for yet another struggle. As Thandika was never one for self-pity, I shall always be ashamed that I did not know that he had succumbed to his third battle with cancer on 27 March.

Loving Africa, loving life
Blessed at birth with two Pan-Africanist names, he was always generous with me, for which I shall always be most grateful. Through example, he showed that a progressive pan-Africanist could be anti-imperialist without being racist, ethno-populist or jingoist.

Although both trained as economists, we rarely ‘talked shop’, and then usually about some new controversy in economics, preferring instead to banter about everything else which interested us, where there was far more coincidence than I ever expected.

His intellectual reputation had preceded him when we first met a quarter century ago in Dakar, listening to West African instrumental music as I tried to meet filmmaker, author and former railway worker, Ousmane Sembene. Later I learnt that Thandika was even an impresario of sorts for Senegalese singing sensation, Youssou N’Dour.

In Buenos Aires for a UNESCO conference years later, we were on a panel with the late Brazilian First Lady Ruth Cardoso and then Senator Cristina Fernandez de Kirchner. Again, he reminded me of his joie de vivre, tangoing in La Boca and listening to the music of Astor Piazzolla and Daniel Barenboim. In Johannesburg more years hence, he introduced me to South African pianist extraordinaire, Abdullah Ibrahim.

A life in exile
Having experienced racist settler colonialism, African despotism and other social injustices first-hand, Thandika’s experiences undoubtedly shaped his choices and thinking. From an early age, his family was forced to move — first from his mother’s Zimbabwe, then Southern Rhodesia, to Zambia, then Northern Rhodesia, and then to his father’s Malawi, then Nyasaland, where he had his secondary education.

Thandika became active in nationalist student politics, then served as assistant editor of Malawi News for the newly formed Malawi Congress Party. Then accused of sedition and inciting violence, he was sentenced to 18 months hard labour after a farce of a trial. On appeal, he was released after three months breaking rocks in a colonial prison.

He later went to study journalism and economics in the US, but could not return after several student activists, including Dr Guy Mhone of the International Labour Office (ILO), had their passports withdrawn by Malawian dictator Dr Hastings Kamuzu Banda in 1965.

Stranded for a period in Ecuador, he became a political refugee in Sweden. After a difficult transition, he taught economics in Swedish at the University of Stockholm with Nobel laureate Gunnar Myrdal. His appreciation of social democracy and the now much maligned ‘welfare state’ grew during this unplanned extended sojourn.

African researchers unite
After a decade in Sweden, Thandika returned to his beloved continent with grants to visit several research institutions. One planned six-month trip later extended to 13 years, including a decade (1986-1996) helming the Council for the Development of Social Science Research (CODESRIA), following the renowned Samir Amin and then Abdulla Bujra.

Thandika’s tenure as Executive Secretary was marked by tremendous organizational innovation, and mobilization of the researchers themselves, rather than their institutions, around emerging themes, often even before they became fads elsewhere.

Against the tides
Despite a quarter century of African economic stagnation from the late 1970s, Thandika rejected the widespread mood of ‘Afro-pessimism’ among Western scholars of African development, including ostensibly radical social scientists.

Instead, he argued that the African malaise was an outcome of its unique colonial and post-colonial histories rather than due to something inherently African.

He also consistently rejected the neoliberal development ‘solutions’, strategies and policies strongly recommended, if not demanded as conditionalities by international financial institutions and like-minded foreign economic advisors and consultants from the 1980s.

Thandika reminded us how well Africa had done economically and socially, e.g., in extending education and health provision, in the early years after independence before the counter-revolution against development economics.

Almost single-handedly, he countered the narrative that African states were too corrupt to bring about development, urging Africans to look to East Asian and other developmental states while rejecting authoritarianism as necessary for such development.

Social development and the UN
From 1998 to 2009, Thandika served as Director of the United Nations Research Institute for Social Development (UNRISD) in Geneva where his considerable mobilization and fund-raising skills, honed at CODESRIA, injected new life into UNRISD as it entered the new century.

The uniquely independent, but unfunded research institute had first been established by later Nobel economics laureates Jan Tinbergen and Myrdal in the mid-1960s, to mobilise researchers to work on pressing social issues in the course of economic development.

Leaving UNRISD, Thandika became Professor at Stockholm’s Institute for Future Studies and then first Chair of African Development at the London School of Economics. Africa’s best-known imperialist must surely have squirmed in his grave when Rhodes University recognized Thandika’s work with an earned doctorate, i.e., not honoris causa.

Viva Thandika! A luta continua
Thandika had a life well lived indeed, much richer than most of us can even imagine. Sadly, persistent patterns of intellectual hegemony and his iconoclastic predilection and democratic insistence are likely to prevent the typically universal implications of much of his oeuvre from being more widely appreciated.

Thankfully, despite, or perhaps because of various hardships, including long exile, his wide ranging, progressive intellectual legacy extends beyond his ideas and writings to include the initiatives and opportunities he selflessly created for African intellectuals at CODESRIA.

While he published some of his most significant work after UNRISD, being the perfectionist that he was and still rethinking so much, there was much more in the pipeline which he hesitated to put out, which I hope his family will let Codesria publish as works in progress with his erstwhile colleague and intellectual biographer Yusuf Bangura as editor.