Malawi is a source, destination and transit country for human and sex trafficking. But the poverty-stricken nation, where almost 80 precent of its population is employed by the agriculture sector, doesn't have the funds to combat the crime. 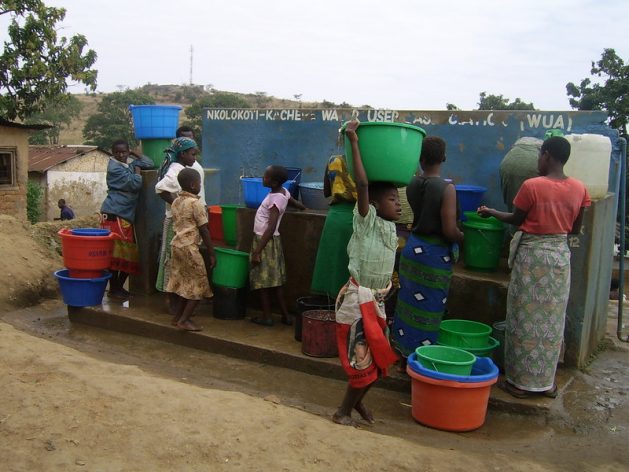 Malawi, one of the poorest countries in the world, just doesn’t have the financial resources to combat human trafficking. With 50 percent of this country’s 18 million people living below the poverty line, many are susceptible to the crime of trafficking. Credit: Charles Mpaka/IPS

BLANTYRE, Malawi , May 13 2020 (IPS) - Malawi is not doing enough to enforce its laws on human trafficking, resulting in a number of cases against perpetrators being dismissed by the courts, according to a local rights group. But local officials say that this Southern African nation — one of the poorest countries in the world — just doesn’t have the financial resources to do so.

No funds to help trafficking victims

Caleb Thole, the national coordinator of the Malawi Network Against Trafficking (MNAT), a coalition of NGOs, told IPS that they are concerned that the TIPF was empty and not enough assistance was being given to victims.

“When we’re rescuing victims they need to be fed, transported and kept in a shelter, but there are literally no funds in the TIPF, the government cannot show you any…there aren’t even shelter homes to provide safety for victims,” he said.

However, senior deputy secretary for Homeland Security and the national coordinator for NCCATIP, Patricia Liabuba, told IPS that government funding to TIPF has increased, but acknowledged there were financial shortfalls.

“Government funding from 2017 has increased gradually from $66,000 to $200,000 in 2019. It is an undisputed fact that trafficking in person issues are multi-sectoral in nature and that the key challenge is insufficient funds to provide shelter and protection services for the victims,” she told IPS.

Liabuba acknowledged the government was, by law, responsible for “repatriating victims and reintegrating them with the community as well as international victims”.

Some victims make their own way home

Modestar* was one of those young Malawian women who had been stranded overseas. She had left her home in Zalewa, a town in Malawi’s southern region for Kurdistan in northern Iraq, some 5,400 miles away, after being promised a well-paying job looking after the elderly.

But the salary she had been promised was slashed in half, and her phone and passport was confiscated upon her arrival. She was forced to work long hours caring for an elderly patient in a private home.

“I was not allowed to go outside of the compound. I worked long hours, at times from 7am to 1am [the next day], without getting paid,” she told IPS.

Eventually she was rescued by Iraqi police who had been tipped off by another woman who had also been in domestic service with Modestar. But the women soon realised they may not be able to return home, as the employment agent refused to return their passports.

“It took the police threatening to shut down their agency for them to agree to let us go; so they went and cancelled our visas and gave us our money and we left,” she recalled.

She had been fortunate that the ‘agent’ had agreed to pay her return airfare — but it was only as far as Johannesburg, South Africa.

While the TIPF is meant for repatriation, there had been no funding available for her. Instead, MNAT stepped in cover the costs her journey from Johannesburg back to Malawi.

Most cases of trafficking are local

Liabuba pointed out that in Malawi, most women and girls are trafficked from rural areas “to work as prostitutes in urban centres and to foreign countries for forced labour, prostitution and sexual exploitation”.

Thole confirmed this: “The country registers between 15 and 20 cases daily nationwide, mostly from border districts such as Phalombe, Mulanje, and Thyolo. Cases are also reported due to cross border businesses with countries like Tanzania, Zambia, Zimbabwe and South Africa and also to countries such as Kuwait and the Arab Emirates seeking job opportunities.”

Are trafficking criminals are being charged correctly?

Liabuba said that in 2019 the country had recorded 142 trafficking victims, with 32 suspected traffickers charged.

“Following the prosecution and successful trial, 16 of the 32 suspects were convicted and four were discharged and the other 12 are being tried in different courts across the country,” Liabuba said.

Malawi’s Police Service had slightly different figures, stating that in 2019 140 victims of human trafficking where rescued, of which 65 were children.

“Out of the 48 convicts the longest term was given to one who is serving 12 years imprisonment with hard labour; he was arrested in Phalombe on his way to Mozambique with six boys,” said Kadadzera.

But Thole said MNAT was concerned that many cases ended up being dismissed and that perpetrators are being fined for their crimes — which is against the law — instead of being given jail sentences.

“Convicts who are supposed to be jailed are being released on fines, with some getting light sentences. There’re some agencies which cannot even be questioned as to what sort of activities they’re operating in the country…law enforcement agencies don’t even fully understand the law and how it is supposed to be interpreted,” Thole told IPS.

Last year, Malawi was downgraded to a Tier 2 watchlist country by the United States Department of State. A Tier 2 country, means that while the country does not comply with the minimum standards for the elimination of trafficking, they are making significant attempts to do so.

According to a U.S. Department of State report on trafficking in Malawi, the “government did not investigate or hold any complicit officials criminally accountable despite these credible allegations and several past cases of Malawian diplomats, police, health, and immigration officials engaged in trafficking abroad. The government did not report referring or otherwise providing protective services to any trafficking victims”.

But Kadadzera called for intensive civic education on trafficking, especially for young women and girls, who are disproportionately affected by the crime.

“Just last week a young lady approached us privately saying she was having doubts about a certain gentleman who claimed to be an agent who could help her get health care work in the United Kingdom. She had already paid the man [about $650] which she has since gotten back and swears not to get carried away again,” he said.

The U.N’s International Organisation for Migration (IOM) in Malawi is one of the agencies working with the government to combat human trafficking.

“However, more needs to be done in creating services that increase employment opportunities and reduction of poverty among at-risk population,” said IOM Chief Commissioner Mpilo Nkomo.

Modestar is a case in point. While funding from the TIPF had not been available to her, upon her return home, MNAT provided her with capital, which she used to start a small business selling clothing and cosmetics.

But Liabuba acknowledged that the government needed to do more in its fight against trafficking.

“The Malawi government should do more to lobby with donor partners for resources for construction of shelters and direct assistance to victims of trafficking…enhance capacity for law enforcers, judicial officers, the National Coordination Committee and protection officers…and develop more nationwide educational programmes targeting mainly women and children,” she said.

But Thole told IPS there was lack of political will to eliminate human trafficking in Malawi.

“We need structures, systems and financial resources in place to support the fight against trafficking in persons in Malawi. Other countries like the U.S. have put stringent measures in place to deal with trafficking for example banning visas for domestic workers for Malawian diplomats. We’re currently we’re on Tier 2 on the watch list which means we’re slowly moving into Tier 3, which is the worst,” Thole said.

* Name changed to protect her identity.

** Writing with Nalisha Adams in Bonn.