Children in Out-of-Home Care: Lessons from the Pandemic 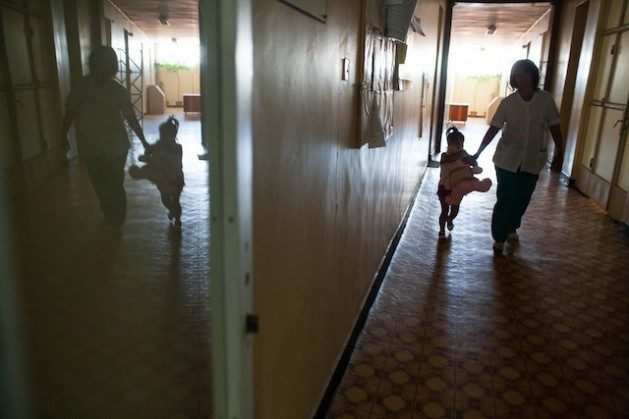 . Credit: Hope And Homes for Children.

LONDON, Jun 22 2020 (IPS) - As the world continues to struggle with the Covid-19 pandemic, the situation in institutions like prisons or care homes has shown how quickly overcrowded facilities can become a breeding ground for an infectious disease. But what about other congregate facilities like residential institutions for children, such as orphanages? What risks do they face? And how should governments be responding during – and after – this pandemic?

How has the pandemic affected orphanages?

The Covid-19 pandemic has had one significant impact on so-called orphanages – or residential homes for children. In the majority of cases, lockdowns and social distancing have meant that there are fewer staff taking care of institutionalised children, as those not living on site are not allowed to return – a measure to avoid the risk of infection. It goes without saying that poorly staffed facilities increases the risk of neglect and abuse.

The vast majority of children living in orphanages worldwide are not orphans - over 80 percent have a living parent. Evidence from different regions shows that many of the children will have been sent to institutions for child protection reasons; though not because of violence or neglect in the home, but because of socio-economic conditions in the family

Understanding that it’s not possible to provide adequate care during the current crisis, numerous institutions have either closed or stopped admitting more children, including in Bangladesh, Cambodia, India, Kenya and Ukraine. In cases where children have been sent back to their families, proper planning, support and monitoring have been rare. But there’s a glaring question here: if these children have families, what are they doing in orphanages?

The vast majority of children living in orphanages worldwide are not orphans – over 80 percent have a living parent. Evidence from different regions shows that many of the children will have been sent to institutions for child protection reasons; though not because of violence or neglect in the home, but because of socio-economic conditions in the family, such as low household income or substandard housing conditions – a result of families not receiving enough support to take care of their children. This is especially the case for children with disabilities who often require considerable assistance but for whom local authority support is rare.

The circumstances in which these contexts arise may differ, but they are all linked to financial difficulties. In Ethiopia, India and Guatemala, for example, many rural farmers facing drought and crop failure and with no means to support their family resort to placing their children in orphanages. Meanwhile across Africa and South Asia, the recent wave of privatisation of education often means that poor families cannot afford even the minimum cost of sending children to school, and are lured by so-called orphanages promising an education and better life for their children.

The Covid-19 pandemic risks further entrenching this culture of institutionalisation. Concerns have been raised that many children will be abandoned or separated from their families as a result of increased poverty, poor health, family stress or domestic violence. In many cases, large numbers of children will be orphaned.

A likely global economic recession will also have an impact. Recent history shows us that economic stagnation can actually become the main reason for institutionalisation of children, as occurred in post-conflict Bosnia and Herzegovina in the mid-1990s, where the number of orphanages increased by more than 300 percent.

And history may repeat itself as a consequence of the current pandemic, even though research amply shows that institutional care is harmful for all individuals, in particular for children, causing long-term effects on their health and psychosocial development.

Particularly for children with disabilities, who are usually overrepresented in residential care, the risks posed by this pandemic are life-threatening, as many have underlying health conditions and weak immune systems, so they are more vulnerable to developing severe complications from contracting Covid-19 or because of neglect, as we’ve seen in recent cases in Belarus and Kazakhstan, respectively.

Notwithstanding these dire situations, the current pandemic also presents opportunities to move away from a culture of putting vulnerable children in institutions. International consensus is that children are better off in a family or a family-type setting, as the institutional nature of care means that even a small, clean and safe care home is still an institution which doesn’t allow children to establish long-term emotional bonds with a significant adult.

As a positive example, some countries where children have been released from orphanages at the start of the pandemic are now trying to avoid readmitting them to institutions after lockdowns end, as is the case in parts of India.

Experts agree that children can be best served through family reintegration, adoption, kinship care, foster care, kafalah, and other family-based care models – not forgetting that families may take different and diverse forms, including married and unmarried couples, single parents, same sex parents and others.

Investing to keep families together or ensuring family-type care is available is therefore crucial, and the current pandemic has already prompted some countries to take the first steps or accelerate ongoing reform. Bulgaria is investing 10 million euros in municipalities to expand their social support services and cover more vulnerable people, including children with disabilities.

Ukraine also announced plans to increase the number of social workers across the country from 3,000 to around 11,000 in order to help vulnerable families cope during the pandemic. In countries with poor social protection systems, national cash transfer programmes have previously shown to preserve families and support relatives caring for children, as we saw during the Ebola outbreak.

A call to action

The current public health crisis is a brutal reminder that residential care for children is not only a dated concept, but a dangerous one. More than ever now is the time to fundamentally rethink how to support vulnerable children living or at risk of being placed in an institution. Human rights advocates, for instance, are calling for “emergency deinstitutionalisation” and immediate provision of housing and support in the community for people with disabilities living in institutions.

What’s key is to stop the cycle of institutionalisation because, once established, orphanages are difficult to reform or replace. Governments must recognise that supporting vulnerable families and investing in communities is not only better for children, but cheaper for the governments too. Institutions can never – and should never try to – replace family-based care.