HYDERABAD, India , Jun 5 2020 (IPS) - In the Philippines, May has long been a month of joy when farmers harvest their rice crop and celebrate the Pahiyas harvest festival. But this year, the mood was somber. The food production and supply system also affected, thanks to the coronavirus lockdown, and the economy frozen. As a result, millions of Filipinos, especially senior citizens, are now looking at an uncertain future.

Vulnerable Elderly in a Pandemic

Currently, 8.2 million of the country’s 109 million people are in the 60 and above age group, with almost 5 percent of the population aged 65 years and above. However, according to projections made by the Commission of Population and Development, a government institution, the numbers are growing and by 2030 the Philippines will have an elderly population of above 7 percent, putting it alongside the ageing Asian countries of Japan, China and South Korea.

But the welfare of the elderly has been a matter of public concern in the Philippines.

The country’s Human Rights Commission says that at least 40 percent of senior citizens experience abuse of some kind. This includes verbal, physical and financial abuse, perpetrated mostly by their children and other family members.

The commission, however, admits that there is a dearth of credible research done on the issue. A 2017 presentation by the advocacy group Coalition of Services of the Elderly also mentions that elderly Filipinos often become “the subject of discrimination, ridicule and even abuse. Some consider them merely as objects of charity and not individuals with inherent, equal and universal rights as other members of the society”. 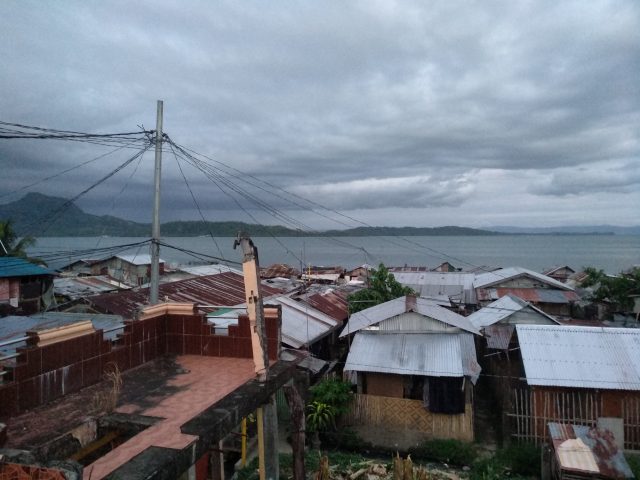 An urban slum in Manila, Philippines. The COVID-19 pandemic has increased the vulnerabilities of the urban poor, especially senior citizens. Credit: Stella Paul/IPS

As part of its current work in Asia, the Asian Population and Development Association is looking primarily into the issue of the advanced ageing of Asian societies.

It’s policy brief on Ageing in Asia acknowledges that “policy responses to population ageing inherently involve questions of values, any responses require both the active involvement of parliamentarians and the creation of platforms for public discussions on these issues”.

Indeed, the abuse of senior citizens has prompted lawmakers in the Philippines to propose a special law to protect them. The “Anti-Elder Abuse Act,” was introduced to parliament last January and proposes to fine and penalise those who abuse senior citizens physically, psychologically, financially or sexually.

The proposed law also recognises senior citizens as a vulnerable sector who should receive a PhP 5,000 to PhP 8,000 (between $100 to $160) in cash assistance. It was approved by the country’s House of Representatives in February but is still to be formally passed into law.

But in the meantime, the lockdown and subsequent restrictions put into place to fight the COVID-19 pandemic increased the vulnerabilities of the elderly. Local media regularly reported on senior Filipinos suffering from a lack of food and medicine as they remained indoors.

Risa Hontiveros, the Philippines first socialist woman senator and one of the country’s youngest lawmakers, has been a fierce advocate for senior citizen’s rights and protection. Hontiveros tells IPS that the COVID-19 pandemic has magnified the vulnerabilities of the Filipino elderly, particularly the poor.

“Since the government imposed what it calls the Enhanced Community Quarantine (ECQ) under which people are prohibited from leaving their houses except for frontliners and other essential personnel, poor senior citizens who still work, many in the informal sector, have been deprived of their main source of livelihood. They are left with very little choice but to rely on local government food packages that are simply not enough, and in many cases, inconsistent in their distribution,” Hontiveros says.

The lockdown in the Philippines started on Mar. 8 and and by the end of April the government had announced people over 60 and younger than 20 would be forbidden from leaving their homes even after “enhanced community quarantine” measures were lifted in early May.

It drew massive protests from senior citizens as an overwhelming majority of them (over 6 million) were still in active jobs. The country currently has a workforce of 45 million.

The regulation was based on the number of COVID-19 patients and casualties aged 60 and above, and initial cases that showed transmission occurred mainly among the elderly who generally have weaker immune systems. 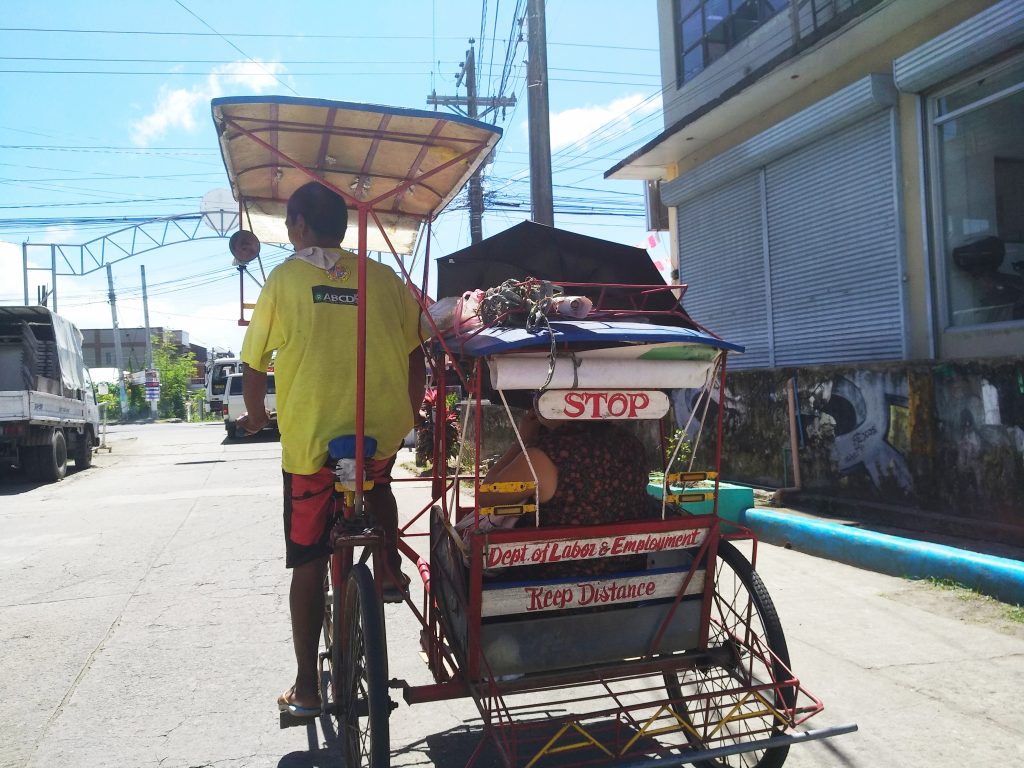 An elderly pedicab driver in Manila. The elderly, especially from poor communities, continue to face multiple vulnerabilities and sustainability challenges in the Philippines, which have increased due to the COVID19 pandemic. Credit: Stella Paul/IPS

But seniors citizens argued that not many of them are sickly or weak and those who were still earning, have to support their families financially.

To put a blanket curb on their mobility served to push them towards acute financial struggle and insecurities.

Finally, in May, the government allowed senior citizen who are part of the formal workforce to return to work. The stay-home order for those outside of the organised job sector, however, still remains valid and continues to be opposed by senior citizens who have taken social media to voice their anger.

According to members of one such group on Facebook “Seniors sa Panahon ng COVID”, the government’s decisions are only hurting the already vulnerable seniors further.

“It only goes to show that our voices are still not being heard by the Inter-Agency Task Force for the Management of Emerging Infectious Disease (IATF) ) and we will remain in ISOLATION until full quarantine is lifted and by approximating it, it might last until somewhere next year. That is too much already for us to be imprisoned in our homes,” Virgilio Dedeles, one of the group members, says.

For poor senior citizens, locked in their homes and dependent on aid, this means continued uncertainty and vulnerability.

76-year-old Lola Rosita of Malabon city says that since the lockdown began, the government has provided relief goods twice, but it’s still not enough. “We really need medicines to treat our current health conditions, hygiene kits, and face masks but we can’t buy them,” Rosita tells IPS.

The struggles of seniors living with disabilities is even greater.

Lola Paz, 71, from Bagong Silangan in Quezon city has a leg impairment due to avascular necrosis. She says that the government relief works are inadequate and lacking transparency.

“Based on my observation, the government doesn’t make any considerations to older persons. They know that older persons are at risk but we are ignored, especially as we face all these difficulties. We, [senior citizens] should be one of the priorities,” she tells IPS.

However, the unclear guidelines and their actual implementation have caused much confusion in communities.

“My office, in partnership with the Coalition of Services of the Elderly and other senior citizens’ organisation launched a relief mission that provided immuno-packs containing masks, milk, vitamins, rice and other food items,” Hontiveros says.

But in some provinces, senior citizens are using innovative ways such as diverse use of land and community farming to save off insecurities.

But she is not retired. These days Anita spends hours supervising a plant nursery that is part of a community initiative led by senior citizens to ensure food security for all through environmental conservation.

The nursery is run by Divisoria Peatland Farmers Association (DPFA), a collective that has joined hands with local government to restore the peatlands endangered by indiscriminate agricultural activities, deforestation, land degradation and occasional forest fire.

The restoration of the peatland – originally an initiative of the ASEAN Peatland Forest Project – aims to replant areas to suitable crops for local people and restore the natural, indigenous vegetation in some areas.

In the nursery, Anita is joined by several other senior citizens who are collectively growing plants and vegetables that are indigenous to their province and which can help restore the peatland eco-system.

Since the COVID-19 crisis began, farmers have not able to market their produce due to travel restrictions.

But with their collective subsistence farming, these senior citizens are not just restoring the peatland eco-system, but are sustaining their community, checking potential food loss while doing this sustainably.

The collective nursery is part of a larger plan, explains Paulia Lawsin Naira, founder of a local NGO called WEAVER, which works closely with the peatland restorers by mobilising and training them.

“Each of the plants grown here has multiple uses and can open up more livelihood opportunities for the locals. For example, Lanipao is used both for fuel wood and house construction and Ticog grass is used for handicrafts,” Lawsin tells IPS.

For Anita, being able to sustain their community while doing this sustainably is the need of the hour.

“COVID-19 has affected us [senior citizens] so much. The nursery helps me stay productive and also earn by making meaningful contributions to our environment,” she tells IPS.