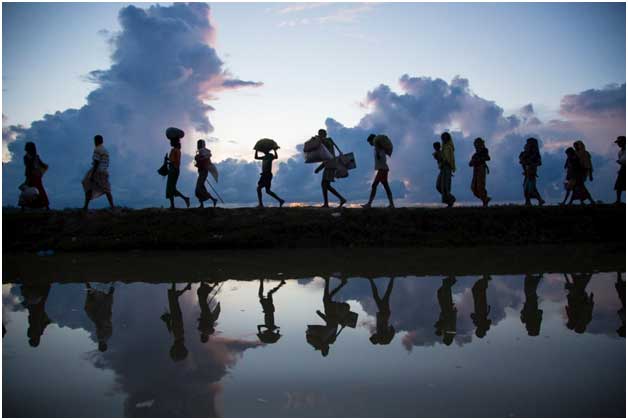 Over the past decade anti-immigrant views, and the cultural stereotyping on which it is based, has been elevated to the primary narrative in many political contexts. Credit: UNOHCR.

AMSTERDAM/ROME, Apr 8 2021 (IPS) - The notion of “Clash of Cultures” is most frequently used as a justification for anti-immigrant prejudice and, particularly in Europe and in the USA, for islamophobia. The reasoning goes as follows: immigrants, especially Muslims, have a deeply different culture from the hosting communities and these differences create unsurmountable tensions and conflicts.

Moreover, immigrants are accused of stealing jobs from local workers, especially low skilled workers; depriving the local population of social services; and, generally, act as a drag on the economy. The only real solution is to stop, or drastically reduce immigration – particularly what is called economic migration; and, if possible, start expelling immigrants that are already there.

Culture is a mix of norms, modes, conventions, beliefs and ideologies. There are major differences in culture between regions and countries; even neighbouring towns or villages may have very different ways of living joyful and sad experiences, such as marriage and deaths, or addressing issues and conflicts.

There is decades of empirical research that show the negative side effects of migration are exaggerated.  In particular the negative impacts of immigration on the wages of low-skilled native workers in developed countries are relatively small and short-lived

And there are frictions and irritations when people of different cultures live with each other. These frictions, if poorly handled, can explode into arguments, fights and even riots.

But over the past decade anti-immigrant views, and the cultural stereotyping on which it is based, has been elevated to the primary narrative in many political contexts. In the USA, President Trump made the campaign to “stop the rapists and murderers from Mexico” a signature issue and successfully drew in millions of voters.

In the UK it was a key factor in the Brexit vote. In Europe, the birthplace of democracy and liberalism, anti-immigrant movements are taking “hate-politics” to new heights – immigrants are blamed for crime, disease, scrounging state benefits and unemployment.

The success of anti-immigrant movements among voters has shifted the political balance and made even the traditional mainstream political parties hesitant to appear soft on immigrants.

Even Nobel Prize winner Aung San Suu Kyi fell into the trap of seeing action against aliens and intruders as justified. She stood by silently while the Myanmar army and vigilante Buddhist monks – often considered as icons of peace and solidarity – committed atrocities against Rohingya Muslims who have been living in Myanmar for several generations, arguing that they were illegally in Myanmar and that their ways polluted the purity of the country.

For those who emigrate, the benefits are clear. Emigration allows them to substantially increase their incomes often several-fold.

It usually also benefits their families and communities as the money they send home triggers higher investments in both physical and human capital. Generally, their countries of origin also benefit due to higher remittance, and due to the skills that they bring back should they return.

Immigration also benefits the host countries. It provides labour for the hardest and most arduous tasks, for example in agriculture and livestock; for the care of the elderly or of young children; or in running small businesses that require long hours for only low returns, such as neighbourhood convenience stores.

This keeps some of these essential services cheap and also releases natives to engage in more productive activities. In many countries immigrants are also net contributors to the tax system, paying significantly more than they draw in benefits though the extent of this depends on the factors such as the fiscal and benefits regimes in these countries, as well as the age profile, skills set and employment status of immigrants.

Immigration also brings in specific skills which may be in limited in the host country. This can range from doctors and health care workers, to highly technical know-how in ICT. In the UK and the USA, second generation immigrants are supplying the mainstream political parties with leadership and strategic thinking – clear indication that the host nations are in short supply of these rather vital skills.

But are there negative side effects? Does immigration cause harm, at least to some sections of the population, in the developed host countries? In particular, do they displace local unskilled workers and drive down their wages?

There is decades of empirical research that show the negative side effects of migration are exaggerated. In particular the negative impacts of immigration on the wages of low-skilled native workers in developed countries are relatively small and short-lived.

In the UK, unrestricted immigration from low income EU countries in Eastern Europe more than tripled and the foreign born component of the workforce increased to about 7%. Instead of creating unemployment among low wage British workers this influx has been accompanied by an expansion of jobs for locals.

Similarly getting rid, or reducing use, of low cost immigrants does little for jobs and incomes of low-skilled domestic workers. When the USA restricted use of seasonal migrant labour in agriculture, instead of hiring native workers, farmers reduced the number of employees by switching crops or investing in new, albeit more expensive technology.

So why has immigration become such an important issue with so much misinformation? One major reason is that it provides a smoke screen for other divisive changes in society, the most important of which is rising inequality.

Over the past three or four decades the world has rapidly become more globalised and interlinked. At the same time technology has drastically changed the employment landscape.

Overall productivity and incomes have increased and most people have seen living standards rise while extreme poverty had declined. But the gains have not been evenly distributed. Some people have done exceedingly well and but there have many losers – people who have lost their jobs or seen their incomes drop.

Particularly at risk are young people, especially those with limited skills and education, who have little prospect for a secure and stable job that would allow them to plan a future for themselves and their families.

These changes have created enormous social stresses and strains. Populist parties and populist leaders have been quick to exploit these feelings of unease and difficulty, and immigrants are an easy target to blame.

In fact they are so easy to blame that you actually don’t really need any. In the UK many of the Brexit voters came from areas where there are few immigrants but that were hard hit by deindustrialization.

In mainland Europe the most virulent and successful anti-immigrant rhetoric is in countries such as Poland and Hungary, despite the fact that immigrant flows are extremely small.

In the coming decades immigration will remain essential to both Europe and North America. Given their low birth rates, which is being driven down further by the COVID-19 pandemic, immigrants are needed to operate their farms and factories, maintain their living standards and, most importantly, to fund the pensions and health care for their aging populations.

It is therefore incumbent on responsible political parties in the development countries, as well as on intellectuals in both sides of the developing/developed country divide, to counter the toxic narrative on immigration, culture and conflict.

At the same time, the Governments of developing countries need to be more forceful and articulate in their defence of rights and treatment of immigrant communities.

And maybe it is time to go even further. Maybe it is time for the developing countries, especially countries from which large numbers of immigrants come – such as Bangladesh, India, Pakistan, Philippines and Romania – to ask to be reimbursed for the costs incurred for educating and caring for the immigrants before they departed.

These countries should request that a part of the taxes their immigrant workers pay should be remitted to their country of origin. And if they are concerns about how the host Governments would use these funds, they could be earmarked for certain activities such as health and education. Maybe even agencies such as the World Bank or the UN could offer to manage these funds.

Leila Yasmine Khan is an independent writer and editor based in the Netherlands. She has Master’s degrees in Philosophy of Cognition and one in Argumentation Theory and Rhetoric – both from the University of Amsterdam – as well as a Bachelor’s Degree in Philosophy from the University of Rome (Roma Tre). She provided research and editorial support.