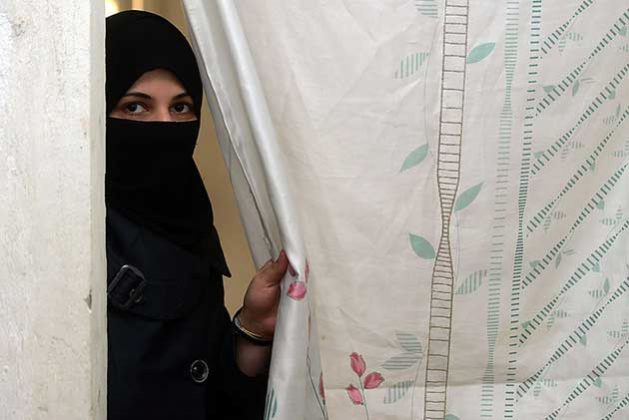 Activists and human rights lawyers have been speaking out about how rape and sexual violence, especially during communal conflicts, aims to humiliate religious and other minorities by turning the women into symbols of dishonour.

In one of the very few cases where the law was applied, the gang-rape survivor Bilkis Bano waited for 15 years to see the perpetrators brought to justice. At the press conference in 2017, she told journalists: “I want justice, not revenge.”

In 2002, the 19-year-old Bano was six months pregnant when she was gang-raped. She witnessed 14 members of her family killed in one of the most horrifying large-scale anti-Muslim violent riots that swept across Gujarat.

The pogrom saw 2,000 people, predominantly Muslim, killed across the state after a train fire, in which 60 Hindu pilgrims were burned alive.

Bano said she wanted to see an India where her daughters were safe. But evidence suggests that gang rape in communal protests and the lack of justice for these heinous crimes has continued in the nearly 20 years since her ordeal.

What binds Bano, gang-rape survivors of Muzaffarnagar riots, the women who allegedly faced sexual violence in the Delhi communal violence in 2020, and the rape victim of Hathras is that all the women come from marginalised communities.

Sexual violence against women has been a recurring feature of communal violence in India since independence.

The recurrent sexual violence inflicted upon women during communal violence in India bears witness to how perpetrators use rape and sexual violence as a means to “dishonour” the community or group and use rape as a tool of revenge. Women are “honour bearers” of a community, and violation of their “honour” or chastity is considered a victorious achievement because it brings shame to the community as a whole that is being targeted, say human rights lawyers and activists.

Bano’s lawyer, Shobha Gupta, told IPS in an exclusive interview that Bano’s rare victory unmasked the authorities’ efforts to cover up and frustrate the investigation.

The Supreme Court took note that she and her family lived a nomadic life for these 17 years, unable to find a safe place to live.

“There is specific finding in the judicial verdict that the police personnel and doctors in Bilkis’s case were guilty of deliberately frustrating the investigation and destroying evidence,” Gupta said.

“There was the failure of law and order at two levels. Firstly, when this incident took place and secondly when the concerned officials abused their positions in deliberately frustrating the investigation, who all were finally convicted by the High Court and Supreme Court.”

Starting with the largely anti-Muslim violence in Gujarat in 2002 to the Muzaffarnagar riots of 2013, Muslim women have been targeted. Their perpetrators, mostly from the dominant communities, have enjoyed impunity.

Only in rare cases like Bano has justice been served.

In the communal violence that engulfed Muzaffarnagar in western Uttar Pradesh in 2013, seven Muslim women filed First Information Reports (FIRs) for gang rape they alleged was perpetrated by men who mostly came from the dominant Jat community.

A look into their cases shows how the legal system failed these women, who, despite their poor socio-economic backgrounds, “dared” to file complaints against their perpetrators, human rights lawyers say.

“This incident happened in September 2013, their charge sheets were filed in April-May 2014, but the trials did not begin until late 2015-2016,” says Vrinda Grover, a human rights lawyer who was counsel for the women.

“This delay was used by the accused to pressurise, coerce and induce the women to give statements saying that the accused arrested in the cases are not the men who raped them. This resulted in acquittals.”

Six of the seven FIRs registered ended in an acquittal, she said.

With the stigma attached to rape, security issues and life at stake, what recourse can one take when even the courts do not seem to adhere to the basic rules and procedures?

Grover says she believes that the Muzaffarnagar District Court was either ignorant of or deliberately disregarded all procedural mandates that apply to rape trials.

“The mandate of in-camera trial, disclosure of the identity of the rape victims, completing the trial within two months of the filing of the charge-sheet, or of prohibiting cross-examination on the past sexual conduct of the victim were disregarded until insisted upon by the women’s counsel.”

Anti-Muslim sentiment in India has been on the rise, and concepts such as Love-Jihad on the rise. Hate speech and slogans directed at women and their agency are common features preceding and during communal tensions.

Slogans of “bahu lao, beti bachao” (“bring in the daughter-in-law, save the daughter”), for instance, were heard in rallies that preceded the violence in Muzaffarnagar. These were raised to instigate men from the majority community to ensure their daughters did not marry outside the community. Instead, they brought women from other communities into their homes and converted them.

An example of impunity and support enjoyed by those spreading this terror was the presence of the present chief minister of Uttar Pradesh, who shared the stage at a meeting where his supporter called for Muslim women to be dug up from their graves and raped.

The lack of outrage at the Muzaffarnagar violence and the justice system’s failure for the rape survivors is a stark reminder that Indian society may not be as offended or as affected when the victims belong to minority groups.

Why was it that the rape of a Muslim woman or a Dalit woman had received the same moral outrage and nationwide protests as the Nirbhaya case rightly received?

Gupta says the compensation of financial help of Rs. 50 lakhs (about US $68 023), a government job with accommodation of Bano’s choice, maybe the highest compensation ever awarded by any Indian Court in a rape case. However, she believes Bano should have received much more.

“Not only in view of the peculiar facts of the case, her sufferance, the failure of the system to rehabilitate her, to heal her wounds, but also to send a very strong message to all States that they cannot fail and also to the public at large.”

While sexual violence inflicted upon women to “punish” their communities continues even with the success of Bano’s case, most rapes go unreported.

In Delhi, for example, no cases were officially reported because of fear of backlash, say lawyers and activists who heard testimonies of women who faced sexual violence in the capital. They attribute this to a lack of trust in the system and fear that their families could be harmed.