The writer* is a former United Nations official who served in Europe, Africa, and Asia 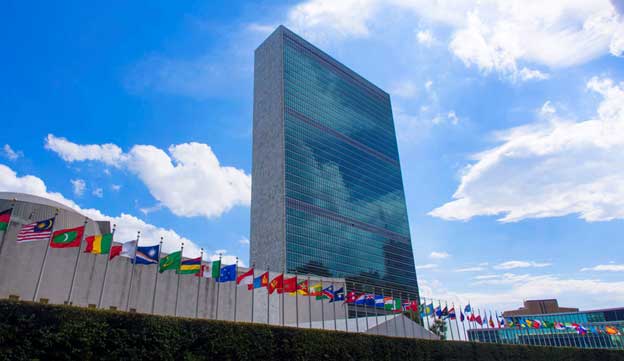 GENEVA, Apr 13 2021 (IPS) - Three recent developments bring about again the reasoning on the dire need to immediately reform the United Nations (UN) and avoid its predictable slide to redundancy.

First, the tragic killing near Goma in the Democratic Republic of the Congo (DRC) of Italian Ambassador Mr. Luca Attanasio on 22 February 2021 engendered a shock within the diplomatic community. Unfortunately, the assassination of top envoys and diplomats has regularly occurred for a long time.

The emissaries of Xerxes the Great, the fourth Achaemenid Emperor of Persia, were killed by Leonidas I, the King of Sparta, in 481 BC. More recently, Mr. Richard Sykes, Ambassador of the United Kingdom in the Netherlands, was gunned down by a terrorist organization on 22 March 1979.

Mr. Philippe Bernard, Ambassador of France, was killed on 28 January 1993 in Kinshasa in Zaire (now the DRC). A terrorist organization assassinated Mr. Christopher Stevens, Ambassador of the United States in Libya, and three of his colleagues on 11 September 2012 in Benghazi. These are a few among countless diplomats who lost their lives in the exercise of their functions.

The aircraft was apparently shot at by a ground-air missile. Mr. Folke Bernadotte, the UN mediator in Palestine, was killed by a terrorist organization on 17 September 1948 in Jerusalem.

Mr. Sergio Vieira de Mello, the UN Special Representative for Iraq, fourteen of his colleagues, and seven other people were murdered by a terrorist attack in Baghdad on 19 August 2003. Numerous other distinguished staff, police, and military personnel serving under the UN flag have, too, lost their lives in the line of duty.

Fateful missions have been part of the UN field staff reality in recent years. Peacekeeping and humanitarian operations in conflict-affected areas of the world are particularly hazardous and vulnerable.

However, the murder of Ambassador Attanasio, representing an influential member state, within the framework of a UN humanitarian mission is indeed a development that crosses a new line in some’s barbaric behavior. Does it signify that increasingly the UN becomes an instrument for political or financial haggles?

With the number of terrorist and other proscribed organizations swelling in Africa and Asia, there is a growing fear that humanitarian missions will routinely become targets of unlawful armed individuals or groups, hence preventing help to reach the neediest, averting monitoring of the programs by donors, and increasing further the tragic possibility of hostage-taking and loss of lives.

Unfortunately, Afghanistan is a perfect example of a situation where neither the diplomatic missions nor the UN can effectively have access to their funding beneficiaries. This allows an increased level of corruption by gangs who initiate insecurity for their unlawful gains, making humanitarian efforts questionable. A profound reflection on how the UN should do business in conflict-affected areas must be undertaken.

Second and as stipulated recently [https://www.ipsnews.net/2021/03/high-ranking-un-jobs-political-birthright-big-powers/], a significant number of senior UN positions are attributed through political understandings to the citizens of the five permanent members of the Security Council or Western and industrialized countries.

It has so far been a sad reality, and the UN culture does not seem to have evolved in a positive direction. While the organization needs desperately funding and political support to accomplish its noble tasks, it can only better flourish by having competent leaders, fair shares of responsibilities among “all nations, big or small,” and apply diversity in its real sense effectively.

Political pressure and games of influence play an essential role when senior positions, including that of the Secretary-General’s, are attributed. The so-called “transparent, inclusive, and merit-based appointment process” to headhunt the ablest candidates from all countries has always been a mirage.

As a result, many leadership positions are either rotating among citizens of the most powerful countries or occupied by individuals for a very long period, causing sclerosis that has already triggered brain and spinal damage to the system.

Besides, a sizeable number of senior staff rotates from one position to another, preventing the organization from the much-needed new blood. Such a practice renders innovation, transparency, competency, fairness, and diversity illusive. The majority of Member States increasingly believe that their concerns are not taken into account and voices not heard!

Third, the candidacy of Ms. Arora Akanksha, a young UN audit coordinator, to challenge the incumbent Mr. António Guterres is refreshing and audacious. In the past, only senior staff presented their candidacies – one of them, Mr. Kofi Annan, succeeded to be endorsed by the Security Council and elected – but only when a superpower vetoed the incumbent.

In principle, a staff never runs against the occupant of the position who is a candidate for a second term. Ms. Arora declared that “we are not living up to our purpose or our promise. We are failing those we are here to serve.” Does it imply that frustration grows among dozens of thousands of devoted staff members who justifiably realize that their leadership’s rhetoric becomes increasingly moot?

Most people idealize the actions and ethics of international entities. They seem puzzled by the quiet acquiescence of certain senior leaders of multilateral bodies to those who propel them to the supreme functions for fear of not being re-elected.

Defending human values and rights, mainly when issues are politically sensitive, must constitute the guiding principles for deeds! Reaction to the Black Lives Matter civil rights movement in the United States was a serious test for UN leadership as a whole and the Secretary-General in particular.

Indications that some preferred silence, endeavoring to get into Mr. Trump’s inner circle instead of denouncing police brutality, judicial discrimination, and unfair treatment of people of color was appalling. Now, their muzzled tweeter accounts loudly advocate for equal rights and social justice!

Ms. Arora’s candidacy should not be considered an accidental occurrence, though her chances are very slim. It may undoubtedly demonstrate an accumulation of ordinary staff members’ long-standing deep annoyance. The conclusion that some have given “away the store as part of [their earlier] campaign [and their] re-election effort will follow the same path” must be considered a matter of great concern by decision-making states.

In conclusion, the UN is at a very crucial crossroads. Inefficient and complaisant leadership is to blame. It must be underlined that authority, responsibility, and accountability are inseparable.

Unequivocal implementation of international standards, and rise against those who infringe them, be it states, big or small, institutions or individuals should be the prime concern of any leader. Moreover, fulfilling the indispensable requirements stipulated in articles 100.1 and 101.3 of the UN Charter must not be jeopardized for any given personal, political, or other reasons.

It is not too late to make the UN a credible international body again and avoid its looming redundancy. However, it has to be reformed profoundly. The Biden administration can be the precursor of such a change. The following aspects of the comprehensive suggestions about the necessity to preserve its integrity and efficiency [https://www.ipsnews.net/2020/08/reform-united-nations-organization/] require immediate actions:

A – The mandate of political positions, i.e., Assistant Secretaries-General, Under Secretaries-General, and Secretary-General, must be brought to one term of only five years at the end of their current terms. This will significantly reduce political pressure and fear for re-election on incumbents and allow faster rotation, increasing the chances of talented individuals from within the system and developing countries to compete.

In addition, the post of Secretary-General will alter quicker, hence making it possible for all continents to claim leadership of the organization more equitably. It is inconceivable that Latin America, with no permanent seat in the Security Council, an area of over 20 million square kilometers, and a population of over 650 million persons, had only one Secretary-General.

It is high time that continental inequalities be addressed equitably through the proposed measure so that even Australia and New Zealand could achieve their justified desire of leading the organization. Besides, the last sentence of article 97 of the UN Charter should be legally interpreted in such a way to allow gender equity. A Security Council or General Assembly resolution would be enough to enact such a fair measure.

B – The confusion over mandates of different entities must be clarified immediately. With the idea of delivering as one, every organization claims to have a role in responding to a challenge. Useless, and on some occasions harmful, competition for relevance and funding adds to the delayed or inadequate response, tarnishing the image of the UN.

A conclusive interagency discussion under the guidance of the Security Council or General Assembly can quickly draw a framework to prevent mandate overlapping while a more profound reform would be needed to streamline charters/statutes of different bodies (see point C below).

C – Other proposed reforms (mandates, UN actions in conflict-affected areas, structures, management, culture/ethics, and delivering as one) would be time-consuming. As specified in the proposed reform of the UN referenced above, external experts of some ten world-class personalities with critical views about the organization must come together with a resolution and, under the supervision of the Security Council to elaborate an implementable strategy, time-bound action plan, and budgetary requirements.

[*] Saber Azam is the author of SORAYA: The Other Princess, a historical fiction overflying the latest seven decades of Afghan history through the eyes of a bright woman and Hell’s Mouth, depicting the excellent work of humanitarian workers in Ivory Coast during the First Liberian Civil War between 1994 and 1997.