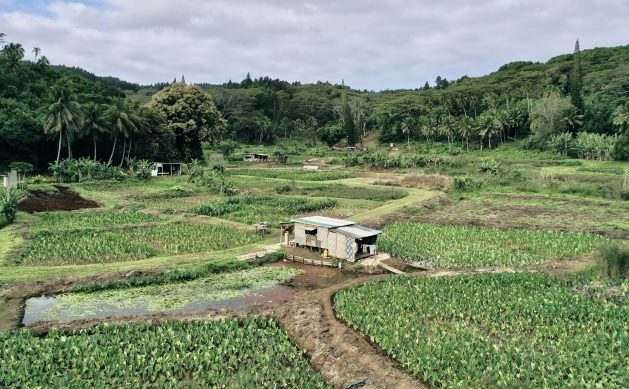 CANBERRA, Australia, Aug 29 2021 (IPS) - Finding ways to be smarter producers of food was a priority in small island developing states (SIDS) before the outbreak of Covid-19. Now the ideas of farmers and entrepreneurs, such as Piri Maao in the Cook Islands, are being avidly sought by governments and development bodies, which are keen to drive resilience and recovery as the pandemic moves into its second year.

Similar to other SIDS, the Cook Islands has limited arable land and finite water resources, while agricultural production has declined in recent decades and food imports increased.

In April this year, Maao was awarded a SMART AgriTech funding grant by the government of the Polynesian nation to establish a solar-powered hydroponics greenhouse to grow vegetables year round.

Considering the force and isolation of COVID-19, strengthening food production and distribution systems is key to fighting hunger and tackling the double burden of malnutrition. The development of aqua and hydroponics embraces all dimensions of food security

“Growing in a greenhouse eliminates any environmental issues, such as rain and wind, which I currently face in a soil-based system. There is a reduced use of pesticides; insect screens will help eliminate a lot of the larger insects, such as moths and beetles. Solar power to run the system ensures sustainability and low running costs,” Maao, an agricultural entrepreneur on the island of Rarotonga in the Cook Islands, told IPS.

The SMART AgriTech Scheme, which was launched in July 2020, is one way the Cook Islands government has responded to the pandemic with a long-term vision.

“Through the AgriTech grants, successful applicants were given the opportunity to pursue new ideas: ideas that can transform a business or the agriculture industry through innovation and productivity improvements, respond to opportunities that are driven by new ideas or meeting new market needs, facilitate better connections between producers, processors and marketers, and reduce farming’s environmental footprint through new technology and more efficient processes, mitigating the impacts of climate change,” Hon. Mark Brown, the Prime Minister of the Cook Islands, told IPS.

Rarotonga is one of 15 islands that make up the Pacific Islands nation, which is located in the tropical eastern Pacific Ocean, south of Hawaii and southeast of Samoa. Its economy and population of about 17,500 people were, until last year, hugely dependent on the tourism industry, which contributed about 67 percent of GDP.

Today the closing of national borders and rapid decline of tourism in the wake of Covid-19 has triggered a decline in local incomes and livelihoods, and highlighted the country’s need to rely less on food imports and grow more locally. The average value of food production in the Cook Islands declined from 231 US dollars per person in 2002 to 43 dollars per person in 2018, according to the United Nations’ Food and Agriculture Organization (FAO). Meanwhile, food is the second largest expense for islanders, amounting to 22.5 percent of household spending in 2016.

Recently, “production has remained consistent, but, when our borders closed, sales of local products plummeted due to the reduction in our tourism sector. Food security and nutrition remains a priority for us, so we advocate to ensure we have sufficient food to feed our population before seeking export opportunities,” Mrs Temarama Anguna-Kamana, Head of the Cook Islands’ Ministry of Agriculture told IPS.

Maao began working on his concept for a greenhouse several years ago and undertook market research to prove there was significant local demand for his produce before going ahead with the business project.

Hydroponics is a form of horticulture where crops are grown in an indoor environment with their roots immersed in a nutrient-rich aqueous solution. Some benefits of this technique are that it doesn’t use soil and minimises the use of land and water. On Rarotonga, agriculture accounts for a major 40 percent of all water usage. Standalone hydroponic systems, which can also be developed at the household level, provide the consistent growing conditions to support uninterrupted production.

“Considering the force and isolation of COVID-19, strengthening food production and distribution systems is key to fighting hunger and tackling the double burden of malnutrition. The development of aqua and hydroponics embraces all dimensions of food security,” advocates the FAO.

Maao is developing a ‘drip fertigation hydroponics’ system, in which irrigation of plants inside the greenhouse from a tank containing a nutrient solution is automatically triggered at the most optimum times of the day. Initially he will be growing red, yellow and orange capsicum, although the entrepreneur plans to diversify with other crops in the near future. Maao’s greenhouse is currently in the construction phase. “We anticipate to have it completed and, weather dependent, fully operational by the end of next month,” he said.

Maao said his project is responding to the country’s food security needs by “increasing local production, the availability of healthy vegetables, locally and consistently, and reducing their importation.” And, with his partner and son working alongside him, he said he was also supporting wider youth and gender participation.

Promoting innovation in all aspects of the agricultural industry, from cultivation to processing, value adding and marketing stages, will be further discussed among the region’s leaders and growers at the SIDS Solutions Forum. The virtual international conference, which is co-hosted by the FAO and Fiji Government, convenes on 30-31 August. Participating countries include Antigua and Barbuda, Seychelles, Madagascar, Barbados, Fiji, Samoa, Cook Islands, Tonga and Vanuatu.

The event will bring together national leaders, development organizations, experts, the private sector and farmers from SIDS around the world to discuss ‘digitalization and innovation for sustainable agriculture, food, nutrition, environment and health.’

“In this, the year of the UN Food Systems Summit, the forum will demonstrate that diverse types of digital and non-digital solutions, many of them home grown and local, are available for the unique challenges of agri-food systems in the SIDS. Strategies for scaling up efficiently with targeted investments in infrastructure and by providing an enabling environment for women and youth entrepreneurs will be outlined,” Sridhar Dharmapuri, Senior Food Safety and Nutrition Officer at the FAO Regional Office for Asia Pacific in Bangkok, told IPS.

It is hoped that knowledge sharing at the forum about better outcomes in food production and nutrition in SIDS will help them to ‘leap frog’ their progress toward the Sustainable Development Goals.