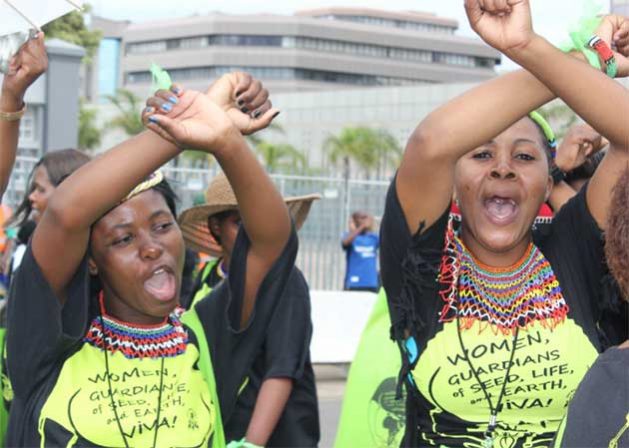 BOSTON, Aug 31 2021 (IPS) - As the United Nations gears up for its Food Systems Summit September 23, the urgent need for structural changes in how we grow, harvest, distribute, and consume food has never been more apparent.

According to the U.N. Food and Agricultural Organization’s (FAO) annual hunger report, released July 12, the world experienced a nearly unprecedented one-year rise in severe hunger from 2019 to 2020. The agency’s annual estimate of “undernourishment” showed an increase of up to 25% over 2019 levels, to between 720 and 811 million people.

Sub-Saharan Africa saw as many as 44 million more people suffer severe undernourishment, leaving 30% of the continent’s residents struggling to feed their families. A stunning 66% of the continent faced “moderate or severe food insecurity” in 2020, according to FAO estimates, up from 51% in 2014. That is an increase of 244 million food-insecure people in just six years.

You wouldn’t know it to listen to the Alliance for a Green Revolution in Africa (AGRA), which released its 2020 Annual Report the same day the FAO sounded its alarms. After noting the challenges of COVID-19 and climate change, the report gushes about the “evidence of improved productivity, better crop quality, higher incomes, and more months of food from [farmers’] surplus.”

In stark contrast to the well-researched data from the FAO, AGRA’s “evidence” was a sloppy set of hastily compiled data presented with examples carefully chosen to show progress. (See my analysis of AGRA’s report here.)

AGRA seems to be living in a different world from poor, rural Africans, oblivious to the documented shortcomings of its technology-focused approach to agricultural development. AGRA leaders and donors seem unaware that the number of severely undernourished people in Sub-Saharan Africa has risen nearly 50% since AGRA was founded in 2006.

That is why African farmer, faith, and community organizations are now challenging AGRA’s failing model, calling on donor agencies and foundations to stop funding the 15-year-old initiative.

Business as usual at the Food Systems Summit

The COVID-19 pandemic was of course largely to blame for the steep rise in hunger in 2020, but climate change and conflict also contributed. So did misguided agricultural policies.

It was the sixth straight year of increases in undernourishment, a trend that last year prompted U.N. Secretary General Antonio Gutierres to call for this year’s Food Systems Summit. The world was clearly not on track to achieve the core Sustainable Development Goal of eliminating severe hunger by 2030.

The summit has been mired in controversy from the outset. Gutierres was widely criticized for his partnership with the World Economic Forum, the corporate elites who gather each year in Davos to discuss the poor world’s problems, sidelining the Rome-based U.N. agencies that generally take the lead on such matters. He compounded the legitimacy crisis by naming AGRA President Agnes Kalibata as Special Envoy to lead the summit.

Major civil society networks and organizations boycotted the summit preparations, which were denounced for favoring technological solutions offered by corporations while failing to put the right to food – and COVID and climate change – at the center of the agenda. U.N. Special Rapporteur on the Right to Food Michael Fakhri recently issued a blistering critique.

The business-as-usual approach of the summit, with its Nairobi-based staff organizing virtual “dialogues” and vetting “game-changing solutions” to food systems failures, seemed deaf to the loud alarms from the FAO. The worst hunger remains in rural areas in developing countries.

For the last 15 years, the Green Revolution has been the dominant approach in Africa. AGRA has led the charge from its Nairobi headquarters, with $1 billion in funding, overwhelmingly from the Bill and Melinda Gates Foundation but also with support from the Rockefeller Foundation a small number of bilateral donors. African governments have chipped in with waves of subsidies to farmers – as much as $1 billion per year altogether – to purchase what the Green Revolution is selling: commercial seeds, fertilizers, and other inputs.

The Green Revolution’s “theory of change” is as simple as it is flawed: put seeds and fertilizers in the hands of small-scale farmers. They will see their yields double, so too their incomes from the sales of surplus crops. And they will become food secure from the food they grow and can now afford to buy.

The evidence suggests that none of that has come to pass. Adoption rates for the expensive new seeds and fertilizers remain low, even with governments subsidizing farmers’ purchases. Many of those who adopt have not achieved large yield increases, even in favored crops such as maize. Few have seen rising incomes from sales of growing surpluses; some have ended up in debt after a bad harvest. And food insecurity has grown from its already alarming levels.

This is less a theory of change than a proven route to continued hunger.

AGRA is set to unveil what it will no doubt present as a bold new strategy. But AGRA will likely do little more than fiddle with its current strategy, just as it has before. Unchanged is the failing premise that commercial seeds and fertilizers can dramatically reduce hunger and poverty in rural Africa through a productivity revolution.

Emperor Nero famously fiddled while Rome burned. AGRA should stop fiddling in Nairobi while more Africans go hungry. And donors should listen to African civil society leaders and say no when AGRA claims to speak for Africans and asks for millions more dollars for its failing strategy.