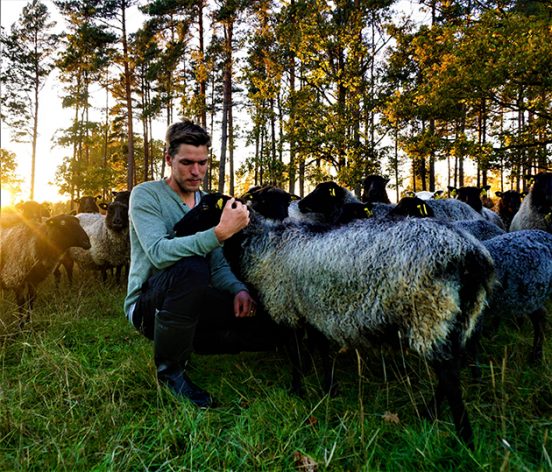 Oskar Olin with his sheep.

STOCKHOLM / ROME, Aug 16 2021 (IPS) - I am in the Swedish countryside, lush and beautiful in its late summer attire, having a conversation with the son of a friend of mine. Oskar Olin runs a sheep farm, Stabbehyltan Lamm AB, where he practises holistic management. His three-hundred sheep graze within an area of 30 ha where Oskar every day moves his flock from one pasture to another. It takes between 45 to 90 days before the sheep are back on the same pasture where the rotation began. The animals are thus not overgrazing the area, while they at the same time trample down a protective layer of vegetation, which fertilizes the soil. Carbon is bound in the earth, soil organic matter increases, retaining humidity and accordingly deepen the root systems of wholesome plants.

Oskar is thirty-one years old and has for four years been back in his native place. During his younger years he was quite adventurous and did for example during a year work with horses on ranches in Spain. After that he ended up at a rancho in Mexico where he came in contact with holistic land management, finding that the land on the other side of the fence was constituted by sand and gravel, while his employer’s pastures were lush and green. Oskar told me that it was on Rancho La Inmaculada de los Aguirre he learned “that it’s all about making everything work and interact in a beneficial manner. Make your family happy and prosperous, make animals and crops to grow in harmony with their natural environment and feel good. Keeping soil and land healthy and moist, while your economy becomes robust and sustainable.”

His Mexican employer made Oskar interested in theories and practices of the Zimbabwean Allan Savory, who claims that properly managed livestock can heal a wounded, natural environment. Savory declares that livestock breeding (wild grazers are hard to manage) might mitigate desertification, provided that the domesticated animals are allowed to preserve grasslands in such a manner that these are enabled to sequester enough atmospheric carbon dioxide to reverse climate change. Overgrazing is a result of keeping livestock in the same place for too long, i.e. feeding on individual plants over and over again, while these are trying to grow back again. A means to reverse desertification would be to properly manage grazing livestock and protect large natural herds of grazers such as bison, zebra, and wildebeest, which guarantee a healthy regrowth and maintenance of grass land and counteract the still common, global practice of slash-and-burn, artificial over-fertilization, and expansion of unnecessary, and even environmentally damaging, crops. Savory states: “How can natural resources possibly be to blame? Only our management of those things can be causing problems. It is our management that places millions of animals in barbaric, inhumane, force-fed factories at great cost to our health, economy and environment and it is our management that calls fossil resources fossil fuels and burns them at a destructive rate.”

Sitting in the crisp grass and talking about all this with Oskar, while being surrounded by his bleating sheep, made me remember when I in 2008 and 2009 spent some time in the Markala district of Mali. There I sat, together with my friends and interpreters Seydou and Mamadou, in the shade of baobab trees talking with village elders, who in their long boubous, measured gestures, as well as their patient and clear-minded manner of debating, made me imagine ancient, Greek philosophers. They told me that with every year the desert advances causing poverty and misery, forcing “our desperate youngsters to lose their lives in pursuit of wealth and happiness within your wealthy countries, up there in the far north.”

I had been hired to make a study of how livelihoods would be affected by land expropriation and sugar production. The Government had signed a contract allocating Sosumar (Société Sucrière de Markala), a conglomerate of various private investors and the South African sugar giant Illovo, a lease comprising 39,500 ha. The intention was to develop sugar-cane plantations, annually producing 190,000 tonnes of sugar and 15 million litres of ethanol.

At least 2,000 peasants had to be resettled to villages erected within the affected areas. The project was acclaimed as being able to “benefit close to 156,000 inhabitants through the creation of 8,000 direct and 32,000 indirect jobs, capacity building and improved living conditions. Implementation of the project will require optimal management of water resources, especially during the dry season.”

Associated British Foods owns 51 percent of Illovo, which controlled 70 percent of Sosumar. Illovo is Africa’s biggest sugar producer and had, at the time I was hired, operations in South Africa, Malawi, Mozambique, Swaziland, Tanzania and Zambia. Sugar and ethanol were mainly directed towards the European market, which allowed for duty and quota-free exports for producers in developing countries. Illovo’s sugar exports into Europe were then 400,000 tonnes per year.

My task was to carry out interviews with the local population and with their cooperation develop plans for the construction and facilities of future “resettlements”. For me it was a rewarding experience to listen to and interact with persons who defined themselves as Mandé (Bambara), mainly subsisting on farming and Peul (Fula/Fulani), most of whom were pastoralists. For centuries Mandé and Peul have shared the territory. The Mandé, who produced millet, sorghum and vegetables, had obtained most of their meat from the Peul, whose cattle were allowed to graze the Mandéfields after harvest.

I was generously received and told that sugar-cane fields would completely change traditional ways of living. Centre-pivot irrigation, a system where elongated sprinkler tubes rotate around “pivots”, i.e. centre points pumping up water from the ground, would mean that all trees in the area had to be cut down. Among them the mighty baobab trees, which many Mandé and Peul consider to be sacred. There were no plans to compensate the locals for their loss of fuel, shadow and sacred meeting points.

Graveyards had to be dug up and their contents removed. The s´í-trees would also be lost. Women use their seeds to manufacture and sell sìtulu, shea butter, widely used in cosmetics as moisturisers and lotions. Furthermore, villagers would be forced to live surrounded by a forest of more than two metres high sugar-cane stems, among which crop-devouring birds, insects and vermin would thrive. Age-old, traditional agriculture would be substituted by back-breaking cane-cutting under a scorching sun. Paths and pastures of cattle herding Peul would disappear. Warm water from sugar refineries would affect and even kill the fish in rivers and canals. Pious Muslims told me they knew of gambling, drinking and prostitution developing in shanty towns growing up around the two huge sugar mills already established in Mali.

Villagers told me they preferred that the Government provided them with loans to establish rice paddies: “We cannot afford to do it ourselves since it takes at least two years before the paddies will yield any harvests. We live by our millet and vegetables and cannot afford to be without them while paddies are constructed. The sugar will not feed us, but it grows rapidly and the two harvests it yields per year will provide us with the cash we need to survive.”

As a matter of fact, Office du Niger, the governmental management and irrigation authority for rice growing zones had already in 2003 contributed a 74 hectare plot of land to the US company Schaffer and Associates, which had been contracted by USAID to undertake a feasibility study for a sugar refinery. The trials of cane varieties amounted to a cost of USD 1,5 million, indicating that neither “development organisations”, nor the Malian Government, were particularly interested in stimulating any subsistence farming of local agriculturists.

USAID’s interest in Sosumar was among other things also part of a political agenda to limit Chinese interests in Malian sugar production. China Light Industrial Corporation for Foreign Economic and Technical Cooperation (CLETC) owns the two sugar enterprises of Mali and intends to expand its landholdings and sugar production.

Unaware, I had become part of a convoluted political game involving profiteering private and governmental agencies that apparently did not have neither the well-being of poor agriculturists, nor a mitigation of threats from climate change and desertification, as their main goal. Only one third of Mali is not desert land and the people of Markala told me that “every year badlands devour huge tracts of fertile land. Please do not talk about culture and environment with your bosses. We don’t want the sugar, but must have it. There is no other solution. No one helps us to stop the advancing desert. If we don’t get cash from the sugar we will die. If our culture, our way of being is eradicated, so be it. Our children have to live.”

Political turmoil and machinations eventually killed off the Sosumar sugar initiative. The ecological crisis is constantly getting worse. While sitting together with Oskar Olin and his healthy sheep within a fertile Swedish meadow, I could not help wondering if all the effort and money that went into the non-realisation of such an unhealthy export crop as sugar was just another example of the unimaginative greed of a wealthy few.

It is high time to learn to listen to the needs and experience of poor agriculturists around the world. To advertise and implement viable, environmentally friendly and sustainable practices, like those of the young, practically inclined and idealistic Oskar Olin in Stabbehyltan, who on a small scale reproduces the land preservation instincts of wild grazers.