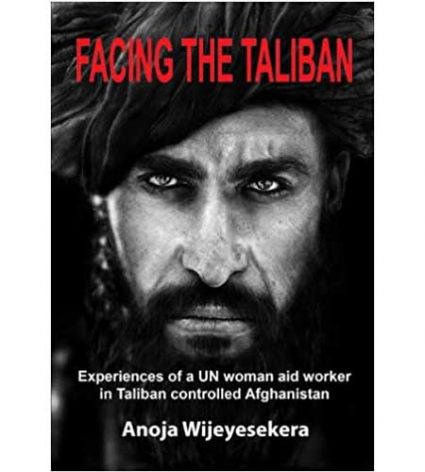 UNITED NATIONS, Sep 28 2021 (IPS) - When the Taliban ruled Afghanistan during 1996-2001, the United Nations was engaged in a losing battle for women’s rights.

And that battle was occasionally led by two senior female UN officials, one of them working for a UN agency providing humanitarian assistance inside unfriendly Taliban territory.

Radhika Coomaraswamy, a former UN Under-Secretary-General, who travelled around the world as Special Rapporteur on Violence Against Women (1994-2003), recounted an uncomfortable eye-to-back – not an eye-to-eye — meeting she had with a Taliban official.

“When I met the Foreign Minister”, she told me last week, “We sat side by side on two distant chairs and he would not look at me. I kept putting my face in the line of his vision and he slowly turned his back.”

“My bodyguard then leaned over and told me what should have been obvious: that he will not set eyes on me”.

“And when I met the Minister of Justice, I asked him about domestic violence” and he told me that “Afghan women were well brought up, and they do not attack their husbands,” said Coomaraswamy, one of the third high-ranking officials in the UN hierarchy, next to the Secretary-General and the Deputy Secretary-General.

Meanwhile, when Anoja Wijeyesekera, received her new UNICEF assignment in Taliban-ruled Afghanistan back in 1997, her appointment letter arrived with a “survival manual” and chilling instructions: write your last will before leaving home.

A former UNICEF Resident Project Officer (1997-1999) in Jalalabad and later in Kabul (1999-2001), she recounted an identical anecdote similar to Coomaraswamy’s.

“When I first went to Afghanistan in 1997, as the UNICEF Resident Project Officer in Jalalabad, the Taliban refused to look at me, as I happened to be a woman. At meetings, which were all- male events, they would look away from me with an expression of total disgust and would keep their heads turned away from me, when speaking to me,” she recounted.

“After a couple of months of this icy reception, which I considered to be a farcical comedy, they gradually thawed and even shook my hand, spoke in English, and became friendly”

“And I said to my staff perhaps the Taliban thought that I had turned into a man!” she added jokingly.

Many Afghan families were displaced when the Taliban advanced on Kabul. Credit: UNHCR/Yama Noori

According to a report in the New York Times last week, during the first years of Taliban rule, women were forbidden to work outside the home or even to leave the house without a male guardian.

“They could not attend school, and faced public flogging if they were found to have violated morality rules, like one requiring that they be fully covered.”

At a fund-raiser last week for humanitarian aid to Afghanistan, which generated more than $1.2 billion in pledges, Martin Griffiths, the UN Under-Secretary-General for Humanitarian Affairs and Emergency Relief Coordinator, said when he met with Taliban officials recently in Kabul, he received assurances— in writing.

Their message read: “We have made it clear in all public forums that we are committed to all rights of women, rights of minorities and principles of freedom of expression in the light of religion and culture, therefore we once again reiterate our commitment and will gradually take concrete steps with the help of the international community.”

But the lingering question is whether the Taliban government will honour these commitments – particularly, judging by its past track record.

Of the $1.2 billion in pledges, UN Spokesperson Stephane Dujarric said September 27, only about $131 million has actually been received; that’s 21.7 per cent of the $606 million required through the end of this year.

“We are very pleased with pledges; we are even more pleased when we get cash,” he said.

Meanwhile, asked about her personal experiences during her tenure in Afghanistan, UNICEF”s Wijeyesekera, described the Taliban as a motley group of fighters, mullahs and other fringe elements of society including drop outs, bandits, criminals and bigots that have come together under the umbrella term “Taliban” which means students.

They are supposed to be students of Islam and by their own definition, she pointed out, they are students and not graduates or professors. This is revealing as many of the foot soldiers are semi-literate but well versed in the art of guerrilla warfare.

“Their brand of Islam is totally opposed to the accepted version of Islam that is taught in universities and other places of genuine learning,” said Wijeyesekera, in an interview with IPS last week.

“As you know the madrassas of Pakistan were established with the support of the CIA to train mujahidin fighters to defeat the Russians. I have seen the Nebraska curriculum, which is explained in my book (“Facing the Taliban,” available on Amazon) which was a tool to brain-wash poor children into becoming cannon fodder on the battle field.”

During her time in Afghanistan, she said, some Talibs holding positions in government were more educated. However, many were Mullahs who were completely closed to the outside world, having only been taught in a Madrassa.

The Minister for the Prevention of Vice and Promotion of Virtue [V&V] named Torabi was a one- eyed, one-legged fighter whose only occupation was beating people, mostly women, she said.
His Ministry was in charge of floggings, beheadings, amputations and stonings. If the newly created Ministry with that name, is headed by a similar person, the result would be similar, she added.

Despite these absolutely horrific practices, conducted by their own “government”, “I have to say that at a personal and sub-national level, the more educated departmental heads were relatively flexible, as they understood the benefits of UNICEF programmes for the children and women of Afghanistan.”

As time progressed, one of the most ruthless and die-hard Taliban leaders — the Minister of Health, developed an understanding with me, regarding the implementation of UNICEF programmes, as he could see the benefits of those programmes.

Thus,” I would say that although “policy” could be one thing, practices could vary depending on the location and the particular Talib in question”.

Asked about other senior female UN officials, she said there were women heading other UN agencies in Afghanistan, including the head of UN Office for the Coordination of Humanitarian Affairs (UNOCHA) both in Jalalabad and Kabul. Also, in Jalalabad the head of the office of the World Health Organization (WHO) was a woman.

Meanwhile, the UN may keep posting women to Afghanistan– at least to challenge the validity of Taliban’s claims on women rights.

Speaking at a seminar at the UN on September 21, Michelle Bachelet, United Nations High Commissioner for Human Rights, said there were credible reports of serious violations of international humanitarian law and human rights abuses taking place in many areas under effective Taliban control such as summary executions of civilians, restrictions on the rights of women, including their right to move freely and girls’ right to attend schools, recruitment of child soldiers, and more.

Since the Taliban’s takeover, its spokespeople have issued several announcements of human rights commitments. Notably, in a letter to the United Nations they announced their “commitment to all rights of women… in the light of religion and culture” and vowed to “gradually take concrete steps with the help of the international community”.

However, practices on the ground have undermined and sadly contradicted these stated commitments, she added.

“Women have been progressively excluded from the public sphere. In many areas, they are prohibited from appearing in public spaces without a male guardian. In numerous professional sectors, women face increasing restrictions”.

To date, Bachelet said, girls over the age of 12 have in effect been prohibited from attending school. Female and male university students are now separated, with female students only to be taught by female professors – of whom there are few, further undermining women’s access to higher education.

She pointed out that the Ministry that once promoted women’s rights has been dis-banded, and its premises taken over by a Ministry for the propagation of Virtue and the prevention of Vice – an all-male office that will apply guidelines on appropriate dress and behaviour.

Taliban representatives have dismantled many Departments of Women’s Affairs across Afghanistan, gaining access to sensitive files and threatening their personnel, and have accused women’s civil society groups of immorality and spreading ‘anti-Islamic’ ideas, said Bachelet.

“Afghan women and girls comprise half of the population. It will be to Afghanistan’s advantage that the talents and capabilities of its women are utilised, to contribute to the Afghanistan of the future.”