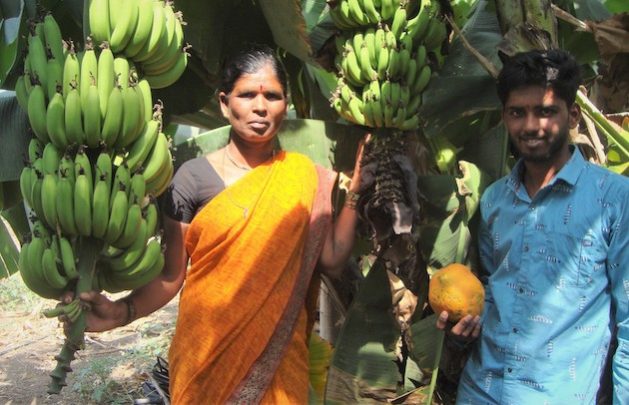 Devka and Krishna Desai on their multilayer farm. They are happy because this method has brought them great success. Here they are with their harvest of bananas and papaya. Credit: Rina Mukherji/IPS

Ahmednagar and Aurangabad districts in the western Indian state of Maharashtra are semi-arid regions in the hinterland. Ahmednagar is drought-prone with erratic rains. Aurangabad district lies in the water-starved Marathwada region of Maharashtra. The mean maximum temperature is high, and the area experienced severe droughts in 2012 and 2014. Barring the Godavari, there are no perennial rivers in the region. Farmers have a trying time during the summer months, trying to prevent the soil from cracking due to intense heat. The rains are erratic, with untimely rains further exacerbating the onset of pests.

Yet, both districts lead in the production of pulses, maize, and grams. Since these crops are susceptible to aphids and pod-borers, high temperatures and erratic rains due to climate change have seen farmers resort to increased chemicals to check pest infestation.

This is where multilayer farming using natural organic methods, integrated pest management, and intercropping has proved beneficial to farmers in Gangapur, Shrigonda and Karjat.  Gradually reducing the chemical content in their farms over three full years, farmers are now opting for natural organic farming, with the help of technical expertise from the non-profit Watershed Organization Trust (WOTR) and scientists from WOTR-Centre for Climate Resilience (W-CRES).

The design incorporates a variety of vegetable and fruit varieties planted in limited space. This means using trees and plants of varying heights and maturing time next to one another so that each is dependent on the other. Smaller plants grow under the canopy of tall trees and yield well, even as tall fruit trees shoot up to the sun. It also ensures adequate shade in the summer months to keep the farms cool and congenial for growth. Water consumption is kept at a minimum using a rain-pipe sprinkler that runs around the patch. The method also uses integrated pest management to control pests by choosing the right plants in a cluster, and natural pesticides, without using any chemicals.

W-CRES Senior Researcher Dr Nitin Kumbhar and Junior Researcher Satish Adhe explains: “Integrated pest management works at several levels. It works through the choice of natural and organic methods, natural pheromone traps, intercropping (as per a formula we have developed), and the use of organic fungicides/pesticides that can be easily made by farming households.”

Soft-stemmed coriander attracts pests. When attacked, the affected stalks of coriander are easily discarded. Marigold destroys nematodes in the soil through its alkaloid roots and protects crops. It also attracts female moths who lay eggs on the plant (leaving other crops untouched). Maize attracts beneficial insects such as the ladybird beetle, which feeds on the aphids that destroy crops.

For all crops grown on patches, it is imperative that planting is done in a north-south direction. “This allows the crops to access sunshine throughout the day,” explains Kumbhar.

Once the farmers did away with hybrid varieties and opted for traditional ones, there was less vegetative growth and fewer insect attacks.

“Part of the problem with hybrid varieties is more vegetative growth and softer stems. This makes it attractive for pests to attack. Traditional varieties are hardier and can withstand extreme temperatures that are now common due to climate change. Farmers do not lose their crops easily due to pest attacks,” Kumbhar tells IPS.

Dipali Bankar, whose family owns a 3-acre farm in Ambelohol village in Gangapur (taluka) of Aurangabad district. A Savita Bachat Gat (Savita microfinance group) member, Dipali used her savings to widen the varieties cultivated on her family’s farm, using the multilayer model on a patch.

“Earlier, we would grow cotton from June to October, Jowar in summer, soybeans and pigeon pea in the monsoons, chickpeas, and onion in winter. Limited availability of water-limited our options. In February 2020, I took the advice of experts from WOTR and went in for multilayer farming on four gunthas (400 square metres of our land. We planted papaya, moringa (drumsticks), bananas, mangoes, guava, lemon, figs, tomatoes, brinjal, chilli (curry leaves), and marigold. Despite the Covid 19 -induced lockdown, the family earned a sizeable sum from the fruit and vegetables cultivated. The Bankars had their first crop of chillies in April 2020 and have sold a sizeable amount every 15 days, helping the family earn Rs 15000 so far. Papaya matures in nine months, while bananas bear fruit in eight months, and moringa yields drumsticks in seven months. This helped the Bankars earn Rs 70,000 from papayas, Rs 28000 and Rs 56 000 from two banana harvests, respectively and Rs 40,000 from selling drumsticks. Although markets were shut during the lockdown, the family managed to sell through local grocery shops and used the rest for their consumption. Dipali’s husband, Devidas Bankar, managed to sell part of his produce in Surat and Mumbai, where he travelled once the lockdown eased.

“We earned Rs 7000 from bananas, Rs 5000 from papaya, Rs 2000 from drumsticks, Rs 1500 from chillies, and Rs 2000 selling spinach following the first harvest, besides saving Rs 2000 every month using vegetables and fruit for our consumption.”

The Desais used to hire bullocks for their farm – with the extra money earned they bought cattle which they fed with home-grown fodder.

“We have a cow and two bullocks of our own, now. The special fodder bag we now make, using jaggery, salt and (maize) fodder grass, is very nutritious and has helped them yield good milk. The cattle relish it too, as you can see,” she points to her cow, hungrily devouring the contents of the fodder bag from a feeding bucket. The family has now decided to double the land under multilayer farming to 200 square metres (two gunthas).

Sangita Krishna Ballal and her family had been growing cotton as a monoculture crop on their farmland until the recent past. Their fortunes changed once they opted for multilayer farming on a single guntha (approximately 100 square metres). With drumsticks, papaya, mango, guava, figs, lemongrass, coriander, chilli, lemongrass, brinjal, tomato, curry leaves, marigold, spinach and dill to supplement their income, the family fortunes started looking up. Lemongrass proved an excellent cash crop, with factories regularly collecting it to manufacture flavouring essence.

Dipak Dattatraya Mandle and his wife Mangal Mandle of Mahandulwadi in Shrigonda taluka of Ahmednagar district found that apart from other achievements, marigolds were successful.  With marigolds priced at Rs 200 per kg, sales during the festive season in September-October clocked around Rs 7000/ per month.

“We now have 20 goats, in addition to our two buffaloes, and seven cows (four Guernsey and three local breeds). We have been selling the milk to the local dairy. Goat milk is in big demand,” Aruna said. Others are diverting their additional income to diversify into other livelihood options. For instance, Kausar Sheikh has used the money to expand her bangle business, while Mira Mahandule and Sangita Popat Birekar have started rearing goats.

In this, the FarmPrecise app developed by WOTR has been of immense help. A multilingual app, FarmPrecise helps the individual farmer with advice related to the amount of water, fertilizer, fungicide, or pesticide to be used for every crop and at what intervals. The farmers are also instructed on the organic concoctions for stimulating growth and keeping their crops pest-free.

This combination of traditional, time-tested methods and a modern app is helping farmers combat and overcome climate change, the newest scourge on the block.