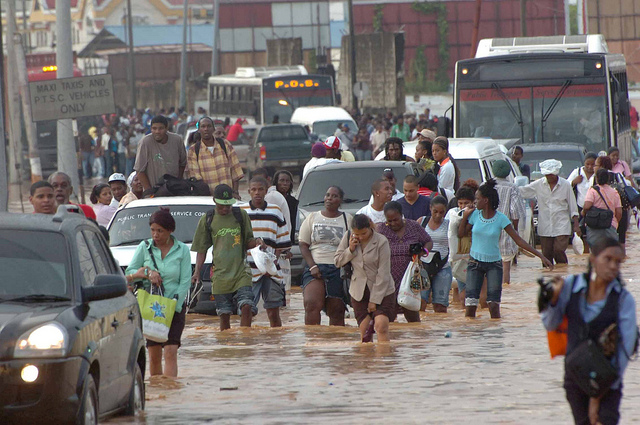 Residents make their way through the flooded streets of Port of Spain, Trinidad. Credit: Desmond Brown/IPS

BONN, 14 Nov 2016 – The 44-member Alliance of Small Island States (AOSIS), a coalition of mostly small island and low-lying coastal countries, has continued to express concerns about the threat of sea-level rise triggered by global warming.

As a result, several low-lying states, including Kiribati, the Maldives, Solomon Islands, Micronesia, Palau and Tuvalu, face the eventual danger of being wiped off the face of the earth. But such an event is likely to create of new category of “environmental refugees” seeking safe havens in neighbouring countries.

If this new category is to be recognized internationally – besides the current “political refugees” – it will require an amendment to the 1951 U.N. Convention on the Status of Refugees.

But how feasible is this? And who will led the move to amend the existing Convention?.

Historically, it was in 1985 that Essam el-Hinnawi used for the first time ever the expression ”environmental refugee“ as title for a UN report, and in 1997 it was embedded in the UN Glossary of Environment Statistics, Studies in Methods referring to “a person displaced owing to environmental causes, notably land loss and degradation, and natural disaster”.

In 1992, the notion of environmental refugee was reported by the International Organization for Migration (IOM) in its first publication addressing this topic and 4 years later a symposium with UNCHR and the Refugee Policy Group was held, in order to explore the connection between environmental degradation consequences and mass migrations.

In 2008, IOM issued a report –Migration, Development and Environment- identifying some reasons for migrations induced by environmental causes such as environmental disasters and soil degradation. As stated by the report, their consequences are more and more devastating in low-income and developing countries for a number of reasons.

Worth-mentioning amid them are a lower resilience due to a lack in infrastructures mitigating the impact of natural disasters; fragile environmental conditions exacerbating every slight change in temperature or deteriorated environments due to extensive pollution as well as intensive farming.

Nowadays, a shared and legally-binding definition of environmental refugee is still missing even if climate-related migrations are no more deniable. Till now environmental migration flows have been mainly affecting the very same country where the natural disaster occurred and at a second stage its neighbouring countries.

At present the notion of “environmental refugee” is a mere and vague definition describing an evident reality, but not providing an effective legal protection.

The Great Lakes Region is a clear example of this cause-effect relationship since “conflict, refugee and environment are closely interlinked”. The 2007 UN report “Impact of Refugees and IDPs on Ecosystem Integrity” clearly states a connection between war, conflict, mass migration and environmental degradation.

When a conflict arises, normal daily life is destroyed and people flee facing the worse conditions ever. Mass migrations often go hand in hand with demolition of both democracy and environment.

Moreover, when a conflict occurs, priority is always given to socio-economic and political issues while environment is almost highly neglected. The repercussions of such a choice are extremely serious: depletion and scarcity of natural resources, deterioration of wildlife and loss of biodiversity, pollution of water sources and soil degradation, food insecurity and malnutrition. Nature is in most cases not only ignored, but also over-exploited with no long-term perspective.

Despite the vast scale of environmental disasters and their massive impact, it is still difficult to identify the turning point between internal displacement and mass migration across international boundaries. At present the notion of “environmental refugee” is a mere and vague definition describing an evident reality, but not providing an effective legal protection.

This disregarded topic has become more and more urgent in the light of current migrations since the phenomenon scale is dramatically increasing. At first climate migrants move internally in their own countries and become IDPs, at a second stage they abandon their homeland and move to neighbouring countries and at the last stage they try to leave their continent in search for a better life. Every step of this circle is marked by huge environmental losses, which are an obstacle to a full recovery in the aftermath.

In 1951 in Geneva the UN Refugee Convention was signed in the wake of the Second World War crimes and HR violations with a special focus on providing protection against political discrimination and persecution.

In the light of the ongoing massive exodus from African and Middle Eastern regions leading to an unprecedented humanitarian crisis, the protection granted by the Guiding Principles on Internal Displacement is no longer adequate and rather too fragile since they provide mere guidelines with no binding instrument.

Under this framework HR of IDPs are acknowledged within their own national borders since by definition they are "persons or groups of persons who have been forced or obliged to flee or to leave their homes or places of habitual residence, in particular as a result of or in order to avoid the effects of armed conflict, situations of generalized violence, violations of human rights or natural or human-made disasters, and who have not crossed an internationally recognized border".

But what happens when the national situation turns to be unbearable? What happens when the pressure exerted on land resources and the environment in itself endangers life? People migrate again, eventually crossing international borders and so becoming eligible for the “refugee status” since the crossing of international borders is one of the main criteria to fulfill.

Nevertheless, they run the risk to be denied international protection as refugees in case they do not meet the legal requirements of fleeing war or persecution. They may end up being labeled as “economic migrants” and pushed back to their countries of origin, being consequently exposed to the same violence and poverty they were escaping from.

It is more and more urgent to open negotiations to emend the above-mentioned 1951 Convention with a view to including a shared and binding definition of environmental refugees, which would fill the existing gap in HR protection for people fleeing from disastrous natural events. A legal recognition of HR violations triggered by climate change would help both in preventing its exacerbation at local level as well as in granting adequate protection to its victims.