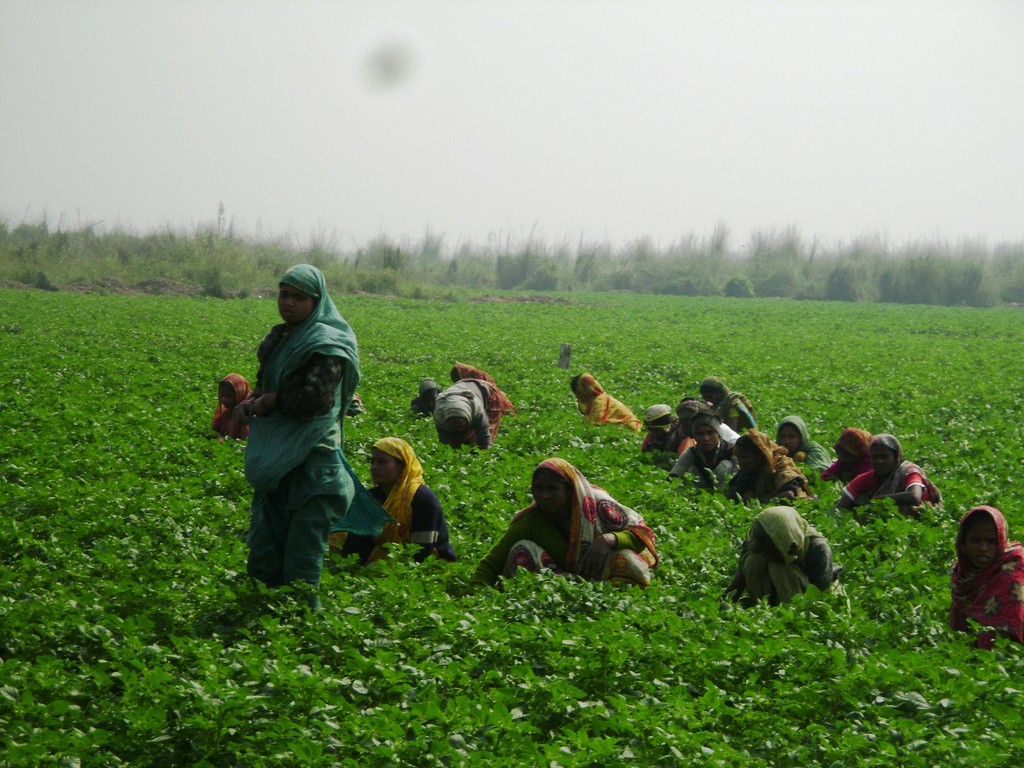 When he spins the web of his memories of the bygone days sitting on the embankment of remote Ghula village of southwestern Bangladeshi district of Khulna, his eyes sparkle in joy with the young folks remain spellbound as if they are listening to fairytales.

Binod story is focused on the time before 1960s, when his surroundings were full of lush green crop fields and plenty of fish, birds and cattle. He used to wake up early in the morning during his childhood and go for fishing in the river nearby taking the tiny wood-made manual boat.

“Still, when I close my eyes, I go through my scenic village. A strong harmony and rhythm were manifested in every creature of Mother Nature,” he says.But, things changed drastically, which he witnessed in extreme form in 1990s.

“No frogs were in the pond, bad smell of dead fishes came from the nearby water bodies. Live fishes were with patches, migratory birds stopped coming as water vanished,” he said.

The marshlands were filled up for production of high-yielding verities of crops after the government gave go-ahead to use of chemical fertilizer in 1960s in the name of green revolution that ultimately destroyed the food chain.

Hanif Mia, 67, of Banda village of Dumuria in Khulna District said that even towards the end of the 60s, the village grounds were filled with plenty of vegetables including red spinach, water spinach, spinach, pumpkin, gourd, water lilies etc.

“Everything was healthy. We had goats, hens, ducks and plenty of fish in the bounty of the water bodies,” he said and regretted that everything had changed just after introduction of pesticides and chemicals. Farmers use various kinds of chemical fertilizers. Initially they used urea, later sulfate, and now, Di Ammonium Phosphate. Before 1947, the government distributed pesticides free of cost among farmers in cooperation with Department of Agricultural Extension DAE.

Experts say excessive use of pesticides kills the insects, makes lands barren, drives away fishes and destroys trees. Even grass, a fodder, turns poisonous to domestic animals. Pesticides have proved to be more harmful than pests as those destroy the nutrition sources which finally disrupt the food chain especially in the coastal area of Bangladesh.

Bangladesh needs to produce more foods to feed its ever increasing population and to achieve the sustainable development goals set by the United Nations.

Agricultural experts say a balanced policy is also needed for Bangladesh, an agrarian economy, to achieve those goals keeping the natural resources unhurt.

Without limiting the use of pesticides and chemical fertilizers it is highly unlikely to preserve the food chain and thus achieve the sustainable development goals, they viewed.

Soil scientists said that continuous use of chemical fertilizers and pesticides in the arable land gradually decreases its productivity. Chemical fertilizers also destroy the soil bio mass, which is important for maintaining ecosystem and crop production. Excessive use of chemicals destroys soil nutrients like sodium, potassium, nitrogen and creates imbalances in soil fertility, according to researches.

Soil has a food cycle, there are lichen moss, fungus (fungi), bacteria and some micro organisms coexist in the soil and they depend on each other. “Snakes, frogs, earth worm, snail, some birds are depending on each other, they all are the members of this soil food cycle. The cycle is absent because of use of chemical fertilizers,” he said.

The government must adopt a clear, specific and holistic fertilizer policy, he demanded.

The most alarming is farmers’ use of chemical fertilizers only for a specific planted crop ignoring other plants like kalmi, pat (jute), shapla (water lily), vegetables and fish which are important sources of food and nutrition for the poor people in the rural areas.

Trees and aquatic species, which play a vital role on ecological balance, are gradually vanishing since these are subject to the direct victim of chemicals.

Presence of poisonous chemicals in the cow’s milk to mother’s milk has been posing serious threat to the unborn babies, according to researches. Ainun Nishat, a water specialist, said that chemical fertilizers imbalances the ecosystem which ultimately causes serious impact on food chain.

“In the eco- system, everything is balanced. When a specific matter is increased then the vibration and activism in ecosystem get hampered. Our soil, water bodies, trees- all are part of the ecosystem, when ecosystem become imbalanced then a consequence occurs in the food chain,” he said.

The government should launch awareness campaign among the farmers with the help of Department of Agriculture to lessen use of chemicals. “The farmers must be educated that chemicals ultimately destroy their lands and sources of other foods,” he said adding that they should be given organic fertilizers stead of chemical ones.

Rahman said fertilizer should be used an optimal level.

The DAE official claim that at present farmers use balanced chemical and pesticides following suggestions from its mini wing called Soil Resources Development Authority. The government’s Seed Preservation Wing suggests that the farmers use about two and three hundreds types of pesticides in Bangladesh.

Md. Mainuddin Abdullah, agriculture secretary, said his ministry has taken steps to introduce organic fertilizers. “We are giving licenses to the company or an individual to use natural fertilizers,” he said adding that the government also has introduced sex pheromone system to prevent the insects to protect crops.