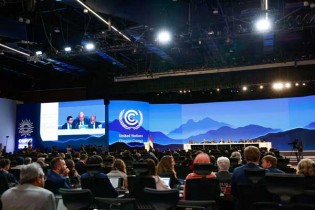 Making the UN Charter a Reality: Towards a New Approach to Development Cooperation?

By A.H. Monjurul Kabir
We are living in a world where both our bilateral and multilateral achievements, consensuses on human rights and social justice, and our resolve to public good are being tested like never before.

A Beacon of Light in Dark Times: the Dublin Platform for Human Rights Defenders

By Andrew Anderson
Before she was murdered in Honduras in 2016, the Lenca Indigenous woman and human rights defender Berta Cáceres poignantly said: “They are afraid of us because we are not afraid of them.”

What Does it take to Build a Culture of Equality & Inclusion at the UN? Reflections from Inside a Change Process

By Mumtaz Mia and Juliane Drews
The organisational is personal. Every day since the two of us were asked back in 2020 to co-lead the process of culture transformation at UNAIDS, the United Nations organisation which drives global efforts to end AIDS, we have both felt at our very core how crucial it has been to get it right.

By Arina Moradi
It’s been over a month since Bayan, a 30-year-old Persian language teacher, last left her home in the Kurdish city of Piranshahr, 730 northwest of Tehran. Her parents believe they must protect her from what might happen to a protester in Iran.

Say “No” to Foreign Intervention in Haiti to Kill our People: We Stand Ready for Peaceful Transition of Leadership

By Harvey Dupiton
Talks of an inevitable U.S. military intervention in Haiti are brewing within diplomatic circles. Without any constitutional or legal authority, our Haitian de facto government gave the green light for special forces to be sent to Haiti to combat our poor people-forgotten, jobless, left with no other choice for survival but the gang violence and insurrection ravaging the country.

By Alon Ben-Meir
By all accounts Israel is considered a democratic country, but a close look at its domestic political combustion sadly reveals that Israel’s democracy is in tatters and is tearing at the seams. This is due to the political leaders’ dismal failure to summon their collective resourcefulness and energy to respond to the call of the hour

By Michelle Bachelet
As you know, after four years as the UN High Commissioner for Human Rights, my mandate ends next week, on 31 August. The world has changed fundamentally over the course of my mandate.

When University of Arizona political economy professor, William Mishler needed Kiribati census and household income data for a project he was working on with Millennium Challenge Corporation (MCC) he turned to the Pacific Data Hub (PDH) to access the microdata he needed.