SOLOLÁ, Guatemala, Feb 18 2008 (IPS) - "Before forming part of the association, we were shut up in our houses. Now we have overcome our fear and shame of going out and seeing new places, and we are bringing money in for our families," says Nicolasa Raxtun, a 30-year-old Maya Cakchiquel Indian woman. 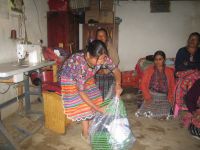 A source of income and training have changed their lives. Credit: IPS/Inés Benítez

In a house in Chuacruz, a village of 800 people in the Guatemalan region of Sololá, six indigenous women have gathered to tell IPS how their lives have been changed by joining the Aj Quen (which means "the weaver" in the Cakchiquel language) association of artisans.

The association, which now has around 800 members, mainly women, was born in February 1989 on the initiative of representatives of organised groups of indigenous craftswomen from the southwestern regions of Sololá, Totonicapán and Quetzaltenango, Alta Verapaz in the north, and the central Chimaltenango.

The association’s goals are to preserve traditional indigenous weaving skills, develop independent production while marketing products at a fair price in order to improve local living conditions, eliminate middlemen, and spread understanding and awareness of the culture and conditions of craftspeople in Guatemala, one of Latin America’s poorest countries.

The project involves poor indigenous women who receive training, assistance and a source of income, which boost their self-esteem and confidence.

"The founders were mainly women in the country’s highlands region who were widowed during the armed conflict," says Aj Quen executive coordinator José Víctor Pop.

A 1996 peace agreement put an end to 36 years of war between the Guatemalan National Revolutionary Unity (URNG) and the state security forces. The latter were responsible for the deaths of the great majority of the 200,000 mainly rural indigenous people killed in the conflict, in which entire villages were destroyed, along with their inhabitants.

Pop describes to IPS the progress made by the women since 1989: "They didn&#39t even dare to leave their houses before, and now they take part in local social activities."

One indigenous woman tells IPS that in her more than 30 years of life, she had never left her village, and that she took a bus for the first time to carry woven goods to Chimaltenango, where the central offices of Aj Quen are located.

Pop, who has been involved in the project since 1994, says the civil war left these woman severely traumatised and living in constant fear, in an atmosphere heavily marked by "machismo" and sexism – factors that led them to isolate themselves from society.

But their work in the artisans’ groups has helped them build up their self-esteem and has restored their ties to the community, he says.

Most of the colourful woven and embroidered scarves, pillow covers, hand-bags, tablecloths and other items produced by the association’s 25 member groups are exported. Only five percent are distributed locally, while 85 percent go to Europe and 10 percent to the United States, Jorge Mario Tzaj, in charge of design, tells IPS.

"But the most important thing is the training" received by the women, says Pop, who underscores that the objective is to improve the quality of life of the association’s members by providing technical, financial and socioeconomic support while preserving indigenous cultures through the production of traditional crafts.

In Raxtun’s house, which is almost invisible as we approach through a dense fog, two women sit at sewing machines making zippers. In the nearby village of El Adelanto, another group of women embroider stars by hand on cell-phone and pencil cases.

The two groups are part of a "production line" that starts with the design of the cases at Aj Quen headquarters in Chimaltenango, which distributes the patterns and materials to the artisans, provides training courses, and collects the finished products.

The weaving of the material itself is done in the village of Chaquijya, where 10 women work on foot looms and run a child care centre.

Groups of women in other villages use their dressmaking, crochet and embroidering skills.

As a non-profit organisation, Aj Quen is based on the principles of fair trade, which means the profits from sales go directly to the association’s members, among whom they are distributed equitably. "We get a good price," Raxtun confirms.

"This project has really helped my family, because we needed money for food and clothing," says Antonia Churunel, a 33-year-old mother of six, whose husband works in the capital.

"By working together in an organised way, not individually, we have achieved results," she tells IPS in halting Spanish, with her one-year-old daughter Evelyn in her arms.

While the women describe their experiences with the group, mainly speaking in Cakchiquel, several children run around the yard outside, mingling with a few chickens, and avoiding the garden where corn and peas are growing.

"We are an economic support for our husbands," says 52-year-old María Chiroy, a mother of three.

And thanks to the training they receive, the craftswomen periodically have a chance to work for other projects, further boosting their income.

While according to official statistics, 56 percent of Guatemala’s population of 13 million lives in poverty, non-governmental organisations (NGOs) estimate that up to 80 percent of people are poor.

And although indigenous people officially make up 40 percent of the population, NGOs put the proportion closer to 65 percent. The rest of the population is mainly of mixed-race (indigenous and European) heritage, with a small minority of European descent.

Lorenzo Muxtai, who runs Aj Quen’s education programme, explains to IPS that the training has a technical component, including teaching how to operate looms and sewing machines and produce crafts, as well as a social focus, with classes on gender issues, reproductive health and family planning, and human rights.

The courses also include basic accounting techniques, small business skills, and aspects like legal rights, how to access government assistance, and the basics of democracy.

"The change has been seen since 1989," says Mustia. "We started to work with women who had no formal schooling, and the training has given them the courage and confidence to speak in public and ride buses, while their living conditions have improved."

The women also forge ties on their own with other NGOs and fair trade organisations, which brings them a larger number of orders. In addition, they weave traditional "huipiles" – colourful dresses or blouses worn by indigenous Maya women in southern Mexico and several countries of Central America – to sell in local markets, he says.

The association’s sales grew 11 percent from 2006 to 2007. However, there have been hurdles to overcome, like a shortage of new designs, an inability to keep up with growing demand, or natural disasters like Hurricane Stan in 2005, which cut off many villages and made training courses and the delivery of goods impossible, he explains.

Forty percent of the project – the production aspect itself – is self-financed, and the rest, which includes the skills training and courses, is financed by Oxfam Belgium. With the assistance of that international development, advocacy and relief agency, Aj Quen plans to open several "solidarity stores" in Guatemala.

Sololá, some 140 km from Guatemala City, is the region with the largest number of Aj Quen member organisations: 18, comprised of a total of 600 people.

Some of the daughters of the founding members, who were illiterate, have become involved in the association, Carlos Mendoza, in charge of production, tells IPS.

Aj Quen also has a microcredit programme and is pressing for reforms of a 1997 law on protection and development of craftsmaking.

"We need an intellectual rights organisation, greater participation by artisans in the government, and a national school for crafts that caters to children," says Pop, who laments "the loss of culture due to emigration."

He says the law on crafts is not in line with the needs of craftspeople and should be amended. There are around one million craftspeople in Guatemala.

The hopes of craftspeople and NGOs are focused on the centre-left government of President Álvaro Colom. In his election campaign, the new president, who took office on Jan. 14, promised to reform the law in keeping with demands from the concerned parties.

But when asked by IPS, legislators and government officials said they were not familiar with the matter.

As the women talk about their lives in the modest tin-roofed house, María Julajuj works outside on her small loom. She doesn’t remember her age, but her fingers move agilely as she sits on the floor next to a basket holding a pile of yarn of many colours wound around empty juice cans.

"We haven’t pulled them out of poverty, but we are working to help them survive. Before, they couldn&#39t even buy a pound of sugar, and now they can afford all of the necessary basic food items," says Pop.