UNITED NATIONS, Apr 25 2008 (IPS) - With a million people a year still dying from malaria, the United Nations is leading a new campaign to provide universal coverage of essential malaria control measures – particularly bed nets – in Africa by the end of 2010. 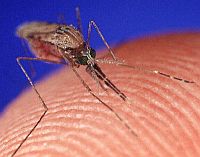 There is currently funding for 100 million nets over the next year and a half, but this leaves a gap of 150 million nets that must be bought and deployed before the deadline, said Ray Chambers, U.N. Secretary-General Ban Ki-moon’s special envoy for malaria.

“The funding for the nets will come from a combination of donor nations, multilateral institutions, and private sector corporations and grassroots campaigns,” Chambers told IPS.

Malaria is a disease that is only transmitted by female mosquitoes at night. Sub-Saharan Africa has 90 percent of the cases, but due to climate change, malaria is also creeping back to areas where it used to be eradicated.

Although there are drugs to treat malaria and simple, inexpensive preventive measures, it continues to be the single leading cause of death for children under age five in Africa. Every day, more than 3,000 children die of malaria – about one death every 30 seconds.

Overall, 350 to 500 million people each year are infected and one million of them die. Malaria also incapacitates people and prevents them from working, and as a result keeps countries poor. In addition to the substantial burden on local health systems, malaria costs Africa 12 billion dollars per year in lost productivity.

One of the easiest ways to prevent malaria is through the use of bed nets that stop mosquitoes from biting during the night and spreading the disease. The most effective types are coated with insecticide that kills mosquitoes when they land on it. The bed nets last for about five years.

Education is also a key component of malaria-control efforts. On Tuesday, the “Buzz and Bite Campaign”, consisting of animated and audio public service announcements in 20 languages, was formally launched at U.N. headquarters in New York.

“I believe that in my lifetime we have the capacity and the political and the financial resources to even eradicate malaria,” Firdaus Kharas, chairman of Chocolate Moose Media and creator of the campaign, told reporters.

Kharas estimated that the campaign has the potential to reach three billion people. It consists of comic sketches starring two female anopheles mosquitoes that give a variety of information on how people can shield themselves against malaria. The series will be provided free of charge to any organisation that asks, and it can be requested on line.

Then there is the “Nothing but Nets” campaign, which brings together people from the religious, civic and business world.

“For the first time ever, leaders from all walks of life – faith and business, sports and philanthropy – are mobilising millions of people to help achieve an important public health goal – covering the continent of Africa in life-saving bed nets,” said Timothy Wirth, president of the U.N. Foundation.

The campaign was created by the foundation in 2006, and has since raised almost 20 million dollars and distributed nearly one million nets in endemic African countries, including Angola, Mali, Nigeria and Chad. Still, as Thomas Bickerton, a bishop in the United Methodist Church, noted: “We have only scratched the surface of the need for nets.”

Chambers was optimistic that the goal could be reached. “We’ve seen unprecedented cooperation and collaboration between agencies through the leadership of the Roll Back Malaria Partnership,” he told IPS. “The only way to achieve the ambitious goal of universal coverage is to continue to work together and forge an unbreakable syndicate of donors, technical partners, and endemic countries.”

The Roll Back Malaria Partnership, an umbrella organisation that includes governments, donors, NGOs and technical partners, has launched the “Cover the Bed Net Gap” campaign. The initiative is already off to a strong start, with funding commitments for 31 million nets – although the estimated bed net gap remains around 120 million nets total.