BEIRUT, May 10 2008 (IPS) - At least 11 people are dead and 30 injured during ferocious gun battles pitting opposition Shia Amal and Hezbollah fighters against members of the Sunni Future Movement, which is part of the majority March 14 alliance in government. As the opposition&#39s militia men clamped down on government headquarters, the balance of power seems to have been shifted permanently in the Land of the Cedars. 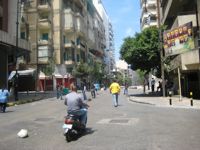 Since the assassination of former prime minister Rafik Hariri in 2005 – allegedly at the hands of the Syrians – and the subsequent resignation of Shia ministers from government, conflict between the opposition and majority factions has been brewing. The government is comprised of the Sunni Future Movement (headed by Saad Hariri, son of slain prime minister Hariri), the Druze Progressive Socialist Party (PSP), the Christian Lebanese Forces and the Kataeb party.

For the past three years, the Syrian and Iranian backed opposition has been battling the Western backed majority, originally over the internationalisation of the tribunal for the prosecution of Hariri&#39s killers.

Since the end of the Lebanese civil war in 1990 and the signing of the Taef Accord by all participating parties – which called for the equal division of power among Muslims and Christians and the demilitarisation of all militia groups – Hezbollah, under the banner of resistance, has been the only party in Lebanon to keep its military arsenal. However, with the pullout of Israel from Lebanon in 2000 (with the exception of the Chebaa farms enclave, the rights to which remains the subject of much debate among Lebanon, Syria and Israel), the role of Hezbollah and the legitimacy of its weapons was once again at the forefront of the political scene.

Tensions culminated in violence on Wednesday when protests called against difficult living conditions and high inflation turned into massive riots, with opposition Shia Hezbollah and Amal forces fighting Sunni Future Movement members. The clashes were politically dovetailed on Thursday by a speech by Hezbollah leader Hassan Nasrallah denouncing the removal of Brigadier Wafic Shoucair from his post as head of airport security, and the government&#39s investigation into Hezbollah&#39s independent telecommunication network.

Hezbollah&#39s leader ominously called the cabinet&#39s decisions a "declaration of war," and the echoing gunfire in the capital&#39s mazy streets and posh neighbourhoods seemed to confirm the announcement.

The Future Movement, clearly ill prepared and poorly trained for combat, retreated in the face of armed opposition factions that managed to take control of Beirut in less than 48 hours, and surround the residences of Saad Hariri, PSP Leader Walid Joumblat and the government building, which remain cordoned off by a protective buffer of Lebanese armed forces.

As the opposition forces advanced in Beirut, they systematically vandalised the property of majority figures and party members. Maya, a resident in the predominantly PSP area of Karakol Druze, witnessed the trashing of her parking lot by gunmen before the intervention of her neighbour, a Hezbollah member, who also prevented the militia men from entering the building. "It was extremely frightening, they actually intended to storm the building," said the mother of two toddlers.

Odette Alameh, who lives in the vicinity of Saad Hariri&#39s residence, said her building was targeted by gunmen posted on rooftops of a nearby construction. The Future TV news offices were burned down by the Syrian Socialist Nationalist Party (SSNP), who erected their flags on the blackened remains of the besieged building.

Ahmad, a resident of the mostly Sunni Ain Mreisseh area, said a neighbouring building was stormed at 3.30am by militia men, allegedly leading to the removal of a Future Movement party member. IPS was unable, however, to confirm the information. Future Movement MP Ammar Houry&#39s apartment in the affluent Tallet Khayat area was ransacked by opposition gunmen, who according to neighbours, also searched the building for weapons.

Throughout the violent events of the past three days, the army&#39s approach has been one of positive neutrality in favour of the opposition. The Lebanese armed forces have refrained from declaring a state of emergency and refused to take part in the clashes, not leaving the government much margin for manoeuvring.

"This is nothing short of a new phase in Lebanese politics," said political scientist Amal Saad Ghorayeb, author of &#39Hezbollah: Politics and Religion&#39. "The government&#39s decision (to remove airport security head Shoucair and denounce the party&#39s private communication network) was unprecedented, and de-legitimised the party&#39s right to resist. I do not see, however, the conflict prevailing for more than a few days," she said. "I expect it to come to a quick resolve, due to the obvious disequilibrium in the balance of power."

The political scientist stated that Hezbollah&#39s proven military superiority will pressure the majority into a compromise. "It is inevitable – the government will have to resign," she said. Saad Ghorayeb predicts that an interim consensus government will call for early parliamentary elections, a longstanding demand of the opposition.

As fighting subsides and the opposition asserts its control over the city&#39s western areas, the implications of the events unfolding in Beirut will certainly reach beyond the country&#39s boundaries and into the region&#39s far corners. "This will lead without a doubt to a drastic reconfiguration of the political order and might pave the way to a revision of the Taef accords, in order to correct the system&#39s imbalances," said Saad Ghorayeb.