MOGADISHU, Jun 17 2008 (IPS) - The United Nations estimates that well over 700,000 people have fled their homes in the Somali capital Mogadishu since clashes between insurgents and Ethiopian forces backing Somali government troops began in Mogadishu in February 2007. 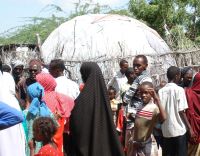 A million Somalis face the arrival of the rainy season without adequate shelter. Credit: Abdurrahman Warsameh/IPS

Nearly 6,000 civilians have been killed or wounded in 18 months of fighting. Nearly half the population of the capital hasfled the violence to the area between Mogadishu and the southwestern town of Afgooye.

Most of the displaced are in camps for internally displaced people on the outskirts of the capital, but some have walked as far as the Somali village of Dobley, on the Somali-Kenyan border 700 kilometres south of the capital.

Jamilo Omar lives in a dome-shaped hut made of little more than rags and sticks. When the rain falls, it pours through the gaps onto Omar and her four children.

She says she has not had enough food for her children since last year when she and her family came to the Elasha camp, the largest IDP settlement in Somalia, where the United Nations estimates more than 800,000 people have found minimal sanctuary on the outskirts of Mogadishu.

"My husband was killed by the Ethiopian forces as we fled the city last year," Omar told IPS. "We came here with nothing; we just live on the occasional handouts we get from aid agencies."

When she arrived at the camp early last year, Omar built a makeshift home out of sticks cut from nearby woods and old clothes. Despite her lack of knowledge in building, she managed to put together the sticks and old clothes so that her children get a semblance of shelter over their heads.

"Then I began searching for food and water for my children, although I had lost contact with all my relatives and neighbors, I just went out," she said.

As the rainy season arrives this month in the south of Somalia, approximately one million people live in appalling conditions without adequate food, water and shelter. Ali Abdullahi Igal, chair of the Mogadishu-based Fanole Human Rights Organisation says providing IDPs with assistance is made harder by the general hike in the price of staple foods.

"Aid has not been getting through to the displaced people – not only those near the capital, where the majority have fled, but also those in the southern part of the country," he said.

Numerous checkpoints along the road between the capital and the Elasha Camp west of Mogadishu, at which militias and Somali government soldiers extort money before allowing aid trucks to pass, hinder the delivery of much needed food and other materials. It sometimes takes two days to travel less than 30 kilometres from Mogadishu to the camps like Elasha and Daynile.

For those who have fled further – to Afgooye and Marka, in the lower Shabelle region, and many parts of the southern Juba region – almost no assistance is getting through from outside.

"Since we left our homes in the capital, we have not been given any assistance from either the international aid agencies or local ones," said Diriye Barre in Afgooye. "We get help from local people who give us what they can. We at least get one meal a day most of the week."

Mire Yusuf, Health Coordinator for the locally-based Dalbile Humanitarian Organisation reports that 40 percent of displaced children are suffering from malnutrition, and one out of five infants born in the IDP camps dies before she reaches her first birthday, according to of DHO.

Many young people in the camps are opting to make the dangerous journey across the Gulf of Aden.

Twenty-five-year-old Dahir Elmi says life in the camps is hard enough to warrant risking his life for work and a better future in the Gulf States. "I do not want to waste my time living like this. Better I should waste my life seeking a better one." Elmi said as soon as he can get the money together – about a thousand US dollars – he'll pay a smuggler to take him across the Red Sea to the Arabian Peninsula.

Hundreds of young men and women from the camps die each year trying to cross the Gulf of Aden to Yemen from the semi-autonomous northeastern Somali region of Puntland. They expect to go on from Yemen to the oil-rich Gulf States where they hope they will get jobs.

Some do eventually get to Bahrain and the United Arab Emirates, but many others are lost at sea; deported back from Yemen; or end up in camps as bad as the ones they've fled.

Calls for increased assistance for Somalia's IDPs have been growing since the food crisis took hold this year. But the calls seem to have fallen on deaf ears. This may be due to the competing emergencies in Darfur, Burma and China as well as the difficulties of bringing aid in to Somalia while pirates operate along its coastline and the security situation within the country remains poor.

But the most important factor could well be that donors have tired of appeals for help for the long-suffering people of this war-torn country.