EAST AFRICA: Trade Opportunities Turn Out To Be Death Traps

KAMPALA, Oct 28 2008 (IPS) - New trade opportunities after 20 years of fighting in Southern Sudan have turned out to be death traps for Ugandan traders because of violence and physical intimidation by the military and civilians alike. 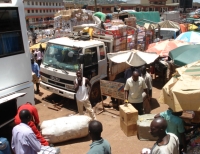 More than 100 trucks and buses from Uganda pass daily through the border at Nimule to Southern Sudan, carrying foodstuffs, construction materials, groceries and beverages from Uganda and Kenya.

The trade has largely been profitable since the Sudanese civil war ended in 2005 but Ugandan traders are now threatening to pull out of Sudan, complaining about extreme violence, intimidation from the military and civilians and unfair ‘‘duties’’.

Some female traders have allegedly been raped while others have lost their lives.

Southern Sudan’s capital of Juba has turned into a death trap for traders from Uganda and other states.

Some traders told IPS that they are harassed and victimised by military commanders, citizens and immigration officials. Duties have rocketed.

Humphrey Wanada, a trader operating in the town called Bor in Southern Sudan, explained that traders are required to pay money on top of a ‘‘state development tax’’ on all goods going through Eastern Equatorial State Province in Southern Sudan.

Wanada says most of the taxes are duplicated – they are exploitative in nature. At times, traders ‘‘lose’’ some of the goods before reaching their final destination.

‘‘We pay these taxes because we have no other option. But even our safety is not guaranteed. The civilians are also not welcoming. At anytime you can see a person pointing a gun at you. You do not know whether it is a soldier or not because almost everyone in Sudan has a gun,’’ Wanada told IPS.

Geoffrey Drani, a Ugandan truck driver, told IPS that authorities in Juba have introduced over 15 taxes to be paid at various checkpoints.

‘‘At the security registration point, we pay five dollars for registering the vehicle entering the town. Traders with goods on the trucks also have to pay up to 50 dollars at a security checkpoint at the River Nile Bridge near Juba.’’

Drani said drivers are also required to register their vehicles with the traffic police at a fee of 10 dollars for having a foreign-registered number plate.

The traders are also required to pay for road toll, which varies according to the vehicle's weight. The toll is paid every time a vehicle enters Southern Sudan.

Despite the controversy, authorities in Uganda and Southern Sudan are eager to foster trade between the two countries and the region.

Ugandan State Minister for Trade Gagawala Wambuzi acknowledged receiving complaints from Ugandan traders. The complaints are being verified with the Ugandan consulate in Southern Sudan.

‘‘The Sudan market is new and it means a lot to us. That is why we have to find ways of sustaining the growing trade. Of course we get disturbed if our traders are harassed but this can be handled with appropriate authorities,’’ he said.

There is a plan to construct a railway linking Uganda to Sudan. A memorandum of understanding has been signed for the joint development of a proposed Sudan-Uganda route.

The existing railway from Mombasa, Kenya, stops at Pakwach-Gulu in northern Uganda.

The missing link is between Pakwach-Gulu and Juba-Wau. A new railway also has potential to connect to the Cairo-Wau and the proposed Dakar-Port Sudan railway lines.

Southern Sudan borders Ethiopia to the east; Kenya, Uganda, and the Democratic Republic of the Congo to the south; and the Central African Republic to the west.