KAMPALA, Dec 1 2008 (IPS) - In her village they call her ‘councillor’. But Jenipher Namugwere is no ordinary councillor elected by the people to represent them in the local council. 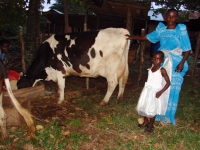 She represents the women in her village, Kadoto, on an advisory council constituted by the Bulangira parish of Palisa district to assess and report their needs to a wider national movement that is seeking to involve women in the planning and budget-making process.

Palisa is one of three districts which is implementing a gender budget initiative spearheaded by the Uganda-based Forum for Women in Democracy (Fowode), with support from the UN women’s agency, UNIFEM.

Namugwere says all the women in Kadoto want access to credit. While she wants a loan for rice farming, others want to start small businesses like poultry and piggery. She claims that following her report to the Bulangira parish development committee last year that women were walking long distances to fetch water, a borehole well was drilled at the village primary school.

“The money for credit schemes hasn’t reached Kadoto,” says Namugwere, but expectations are high among the women. Sarah Kagino from the Bulangira parish is frustrated by the delay. She says she has given up on promises made by the government to help women like her.

Instead she has put all her energies on a Friesian cow she got through Heifer International, a non-profit organisation. “I see women meeting in SACCO’s (a cooperative society network), waiting for money and it hasn’t come. They have been attending trainings for poultry, bee keeping, but I don’t see them getting started on any project.” Kagino is dismissive.

A former agricultural extension worker, Kagino says by concentrating on her cow, she can earn the equivalent of 25 dollars daily just from the sale of milk.

Women in Uganda represent 80 percent of the agricultural labour force, and are responsible for the bulk of food crop production. But they have no control over the key factors of production like land.

Isa Taligoola, Palisa district chairperson, is convinced the money will come. “The most important part was to put the needs of women in the budget and this has been achieved. What is remaining is to disburse the money which we shall certainly do once the central government releases the money.”

The main economic activity in Kadoto, one of the poorest villages in the district, is farming. The most common food crops are millet, potatoes, beans, bananas, simsim (sesame, sunflower, and cash crop, cotton.

Palisa district has four government dispensaries, 25 health centres and one hospital. The health centre in Bulangira parish is run by a management committee, a majority of the members women as per the government’s affirmative action policy.

Minister of Gender, Syda Bumba, believes this is a successful way to mainstream gender in the national planning process.

Julius Mukunda, director of the gender budget programme at Fowode, says the pilot project launched in the districts of Palisa, Kibaale and Kabale is set to roll out to several other districts. Fowode and UNIFEM have been working on influencing budgetary allocations to issues that affect women since 1999.

Mukunda explains they have conducted workshops with members of parliament, district councillors and other stakeholders as a way of influencing the budget processes.

In the 2008/09 budget for example the government has allocated an additional four million dollars to the education sector, to support the twin goals of universal primary and secondary education.

Taligoola is optimistic that some of that money will reach schools in his district. Palisa has a total of 197 primary and 37 secondary schools.

Patricia Munabe, executive director of Fowode, affirms that while the Universal Primary Education policy, initiated by the government in 1997, has significantly narrowed the gender enrollment gap, just 42 percent of girls complete their primary education compared to 55 percent boys.

She says dropouts are due to a variety of reasons including financial constraints, family responsibilities, illness, early marriages and pregnancies. She claims Fowode’s gender budget initiative is designed to tackle such issues.

Results are already coming in from his district, according to chairperson Taligoola. Drop out rates have come down to 40 percent among girls in Palisa.

UNIFEM’S Christine Nankubuge Ndaula in Kampala tells IPS that there will be susbstantive change when the gender budget advocacy campaign expands to more districts. The gender budget initiative, according to Mukunda, was launched following intense lobbying and advocacy with members of parliament who first enacted a law giving themselves a role in the earliest stages of budget formation.

“We made sure that we enlist the support of members of parliament on issues of gender budgeting and that means that they are themselves aware of issues of gender and can input into the budget process,” he explains.

The campaign calls for public participation in the budget process to develop a gender sensitive budget system. Fowode’s Munabe sees the process as opening the way for a more transparent and participatory budget process.

*This is the third of a three-part series that looks at gender equality in finance in Uganda.