ATLANTA, Georgia, Dec 15 2008 (IPS) - As Democratic President-elect Barack Obama prepares to take office in a few weeks, he faces a hungry nuclear industry that wants to be included in his energy plan. 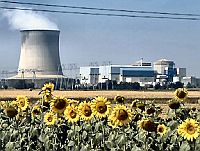 At least 31 new plants have been proposed throughout the United States, according to the Nuclear Regulatory Commission’s (NRC) website. Twenty-six of these are already going through the NRC’s environmental impact review and site approval process.

Obama has included reducing U.S. dependence on foreign oil and promoting alternative energies as key components of his campaign platform.

“I will set a clear goal as president,” he said in his Democratic nomination acceptance speech. “I will tap our natural gas reserves, invest in clean coal technology, and find ways to safely harness nuclear power.” He added that he would also use solar, wind, biofuels, and water as sources of energy.

“Nuclear power represents more than 70 percent of our non-carbon generated electricity. It is unlikely that we can meet our aggressive climate goals if we eliminate nuclear power as an option,” Obama and Vice President-elect Joe Biden wrote in their energy plan.

“However, before an expansion of nuclear power is considered, key issues must be addressed including: security of nuclear fuel and waste, waste storage, and proliferation.”

This assumes that nuclear fuel and waste storage are the only problems with nuclear power, however.

As previously reported by IPS, nuclear power also uses vast amounts of water and releases low levels of radioactive pollution, which one study has correlated with increased cancer rates in Burke County, Georgia.

“One thing I haven’t seen them point to, which is the real sticker on this, is the problem of economics. The nuclear executives that want to build don’t want to use their own money. You see them hat in hand here in Washington [seeking] loan guarantees. I can’t see Congress doing that given we’re in the hole financially,” Jim Riccio, a nuclear policy analyst for Greenpeace, told IPS.

The Green Party of the United States said in a statement that it “rejects President-elect Barack Obama’s reckless support for new nuclear power plants, as such an agenda poses unacceptable health and environmental risks and would be fiscally irresponsible in the extreme.”

Many of the companies which are applying for new plants have done so under President George W. Bush’s 2005 energy bill, which created government incentives for nuclear expansion and simplified the plant approval process.

“It is crucial for the new administration to continue with these and other efforts to shape a comprehensive energy policy that recognises the value of nuclear energy and other low-emission electricity sources,” Frank Bowman of the Nuclear Energy Institute said in a press release.

“We must recognise as a nation that we cannot reach our energy goals without the reliable, affordable and carbon-free electricity that nuclear power plants generate to power our homes, businesses, telecommunications, military and transportation infrastructure,” Bowman said.

It is unclear whether Obama plans to continue to support government incentives or deregulation for nuclear power. Obama voted for the 2005 bill, which included tax breaks for oil companies, although he later said he did not support everything in the bill.

Obama appears unlikely to throw the nuclear industry under the bus entirely, however. He was one of the most supportive candidates in terms of nuclear power during the Democratic primary and he has given mixed messages at best regarding his stance on the issue.

“I actually think we should explore nuclear power as part of the energy mix,” Obama said during the CNN/Youtube Presidential Debate on Jul. 23, 2007. “There are no silver bullets to this issue… But we’re gonna have to try a series of different approaches.”

Obama was asked again about nuclear power during a meeting with the Editorial Board of the Keene Sentinel newspaper in New Hampshire, on Nov. 25, 2007.

“I’m not somebody who says nuclear is off the table no matter what because there’s no perfect energy source,” Obama said.

“There are a whole set of questions and they may not be solvable, and if they’re not solvable I don’t want to invest in it,” Obama continued. “But if they are solvable, why not? I don’t think there’s anything we inevitably dislike about nuclear power. We just dislike the fact that it might blow up and radiate us and kill us; that’s the problem.”

Obama has also been accused by former Illinois constituents of selling out their interests to the nuclear industry while he served as a U.S. senator.

Obama was criticised by residents of Godley, Illinois, who turned to Obama for help after they learned in December 2005 that the nearby Exelon nuclear power plant had been leaking tritium, a radioactive by-product, into the water supply without notifying residents.

The magnitude of the leak did not exceed federal guidelines, but residents were still concerned.

Obama had at first responded to the residents by filing a bill in the U.S. Senate on Mar. 1, 2006, the Nuclear Release Notice Act of 2006, which said it “shall require” all nuclear power plants to “immediately notify the Commission, and the State and county in which the facility is located, of [any] release.”

The nuclear industry immediately opposed the bill. The Nuclear Energy Institute attempted to preempt the bill’s requirements by offering voluntary disclosure by plants.

But it allowed the NRC to decide which of those leaks, if any, would be required to be disclosed. The bill, S. 2348, never made it out of the Senate.

“When trying to get the nuclear industry to do anything, compromise seems to be in the cards,” Riccio said.

When asked about his support of nuclear power at a campaign stop in Iowa on Dec. 30, 2007, Obama misled audience members about the outcome of the bill.

“The only nuclear legislation that I passed has been to make sure the nuclear industry has to disclose whether they emit anything that might be radioactive and share that with state and local communities. I just did that last year,” Obama said.

However, this is not true; Obama had stripped the bill of language requiring disclosure and it never passed the Senate.

Incidentally, Exelon executives and employees had given over 269,100 dollars to Obama’s congressional and presidential campaigns by February 2008, making the industry one of Obama’s biggest donors early in his campaign, according to the Centre for Responsive Politics.